Grambler t-shirts!? Why the hell not!?

What better way to celebrate the legacy of the greatest charitable football betting experiment ever than with a 100% official Grambler t-shirt, NOT available now! 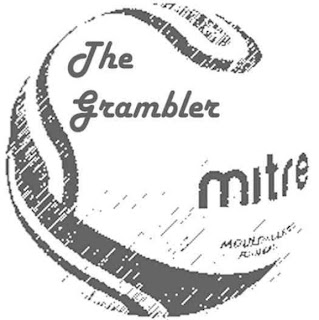 Posted by The Grambler at 18:20 No comments:

It was with great sadness that I bring news of the end.  For real this time, none of yer fake Mayan nonsense.

Unfortunately, my condition has taken a turn for the worse over the past few weeks and I shall soon be departing for the Great Ladbrokes in the Sky.  Perhaps most frustratingly (although probably not) is that I will not be able to finish this season's Grambling.  But after 22 weeks, a MASSIVE £59.03 in winnings, almost 4,000 visitors from around the world and a lorra, lorra laughs/groans, we have reached the end.   I am proud of this project in an odd way and thankful to everyone who took the time to visit.

But worry ye not, The Grambler may some day rise from the ashes like the proverbial phoenix, with Grambler fan and awesome fatherperson Papa Grambler keen to take on the project.  Stay tuned and you may well see a return for the 2013/14 season, full of awful jokes, awful puns and awful predictions.  It would make me proud!

I urge anyone who reads this to head over to the Cancer Research Information on Bowel Cancer website and have a look around.  It is a cancer which is increasingly affecting younger men and it would help so much if people simply knew what to watch out for.

Here is proof of the donation to the good people at the Bobby Moore Fund: 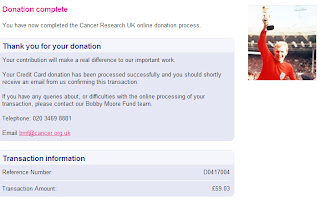 Unfortunately, I didn't have enough time to get the giant novelty cheque made up!  Had I made it to the end of the season, it would inevitably have been millions, but they will have to settle for almost £60 for now.  You too could donate in honour of The Grambler by clicking the link in the side bar.

Which leaves me nothing to say other than the following:

Santé!
Posted by The Grambler at 07:24 No comments:

It may have been slightly noticeable this week that their was no Grambling action.

Having spent the past fortnight, and unfortunately the festive season, in hiphopspital, on Thursday, the surgeon invited me to the theatre... And I thought, 'that's just swell!'  But he was lying.  Rather than treating me to Shakespeare, he cut me open poked about my insides for eight hours!

Having been in intensive care since then, with many a tube emerging from one's body, it seemed both inappropriate and impossible to complete the task this week.  Which is a shame as it was quite definitely going to be THE week.  Never-mind, I am hopefully fixed now and next weekend will be a return to form.  In the meantime, I'm away to play with this magical self-administering morphine button... Aaaaaaah!
Posted by The Grambler at 09:30 No comments: