1. An amusement or pastime


2. a competitive activity involving skill, chance, or endurance on the part of two or more persons who play according to a set of rules, usually for their own amusement or for that of spectators.


Odd start to this week’s (g)ramble, don’t you think? It is to do with the Olympics held in Rio. Can you guess what? Yes, these are definitions of the word ‘game’. Olympic games. See? People ‘play’ games. Game also refers to animals shot for ‘sport’, but that’s another story.


So, why, over the past month has just about every news bulletin on the Beeb Beeb Ceeb led with the Rio Olympic games? Fair enough, a bit of ‘now over to our sports correspondent’ would be acceptable, because this was a fairly big sporting event, after all. I have no problem with that. However, a sporting spectacle should never be considered to be more important than all the atrocities taking place around the world.


Worse still is the British Broadcorping Casteration’s obsession with Team GB. Apart from Mr Bolt and his triple treble or treble triple and Michael Phelps winning his nine hundredth medal, hardly anyone other than a member of Team GB got a mention. And why Team GB? We’re not French. In their language an adjective comes after the noun as in ‘le chien noir’. The black dog. Incidentally, that is my limit when it comes to French. Doesn’t get you far, I can tell you. If you start having your words the wrong way round in English, it just sounds daft. You wouldn’t ask for some crisps smoky bacon, or a nut ginger, or lade marma. Team GB, indeed.


What about Tuesday’s news? Surely they couldn’t string it out for another day. Yep. They did. First item on the news - Team GB returning home in a plane with a specially painted gold nose-cone (I kid you not.). Who gives a monkey’s that a planeload of privileged individuals, who get to do for a living what others (those with a proper job) can only do for fun, has come home?


Oh yes, they are very good at what they do, but being able to run, jump, swim, cycle, row, throw things, swing on things or punch people doesn’t really get you very far in life does it? Well, the last one might. Either that or you end up behind bars.


There is now talk of giving these runny, jumpy, swimmy people something in the new year’s honours. I can see it now. So and so gets an OBE for being able to run fast. Thingy gets an MBE for jumping high. Hoojamaflip gets a knighthood for riding a bike. Don’t get me started on the honours system...


You may be thinking I am being a bit hard on these sportspeople. It may seem that I am jealous of sporty types. Of course I’m not. I have had my sporting successes. Well, success. I once won a heat in the potato and spoon race in the school sports, I’ll have you know. I might have won the final if I’d been allowed to use the same ladle... spoon, I meant spoon... that I’d used in the heat.

Any birthdays of note to celebrate? Did any famous or notorious folk come into this world on the 27th of August? Of course they did. Charles Stewart Rolls 1877 (He of the posh motor car. When he went into partnership with Henry Royce, he supposedly said, ‘You build the cars and I’ll sell them.’ He also has the unwanted distinction of being the first Briton to die in an aeronautical accident.), Eric Coates 1886 (Cloakroom attendent.), Man Ray 1890 (Snapper.), Donald Bradman 1908 (Strine crickuddy blike.), Lyndon B. Johnson 1908 (36th president of the good ol’ U S of A. ‘The Democratic Party at its worst is better than the Republican Party at its best.’ Still true it would seem.), Martha Raye 1916 (No relation to Man. Or Johnnie. Or Ted. Or Sting.), Tony Harris 1916 (Sarth Ifrican creekuty blake.), Pat Coombs 1926 (Ubiquitous silly character in 60s sitcoms.), Tuesday Weld 1943 (What if you want some brazing work done on other days of the week?), Barbara Bach 1947 (Mrs Starr or Starkey.), Pee-wee Herman 1952 (Flasher.), Derek Warwick 1954 (Racey car bloke.), John Lloyd 1954 (Mr Evert.), Glenn Matlock 1956 (After leaving the Sex Pistols, formed Rich Kids with Midge Ure, Steve New and Rusty Egan.), Bernhard Langer 1957 (Golfy bloke.), Peter Ebdon (Snookery bloke.) and Denise Lewis 1972 (Runny, jumpy, throwy woman.)

Let’s move on to grambling matters. What happened last week? [Nothing. We didn’t have a bet. Had you forgotten? - Ed.] Oh yes. Of course. What has The Grambler picked for us this week?

Teaser time. Yay! Last week I asked you which Premiershit club had signed the most overseas players, after Chelsea that is. I had thought Manchester City, but I was wrong. The answer was West Ham. Over the years, they have had 129 players on their books; Man City was third with 127. Although that total has already changed in the last week because Joe ‘Dearest’ Hart has been usurped by Claudio Bravo, who has the distinction of being the shortest goalkeeper in the Premiershit being only 5 feet 7 in his stockinged feet*.


One for this week? Which London-based club, in 1888 dropped the words ‘St. Andrew’s Church Sunday School’ from its name? A good un there, I reckon.


*Actually, he is 6 feet 0 inches, but there was a reason for mentioning 5 feet 7 inches. That was the height of Teddy Davison, the smallest goalkeeper ever to play for Engerland. Granted, he only played once for his national side, but apparently he had lightning reflexes which more than compensated for his diminutive (in goalkeeping terms) stature.

And finally, Cyril? And finally Esther, I am indebted to a Mzzzzzzz M. Raye (born exactly 100 years ago today) who gives us our finishing link this week; a song from 1941’s Hellzapoppin, a film which, though it looks a bit creaky nowadays, featured some imaginative use of camera trickery that was unusual for the time. Ladeez and genullum I give you Watch the Birdie . 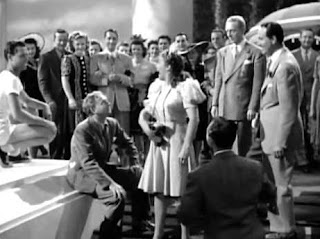