Week 10 - The Grambler wants a word with Roald Dahl

If I could speak to a Mr R. Dahl (which I can’t, obviously, since he is dead) I would tell him that I do not find Mr Fox fantastic. I’m with Messrs Boggis, Bunce and Bean on this one. What am I talking about, I hear you ask. Do you recall a (g)ramble from back in early summer (Week 45 - Euro 2016 - another gramble) when I had a moan about foxes digging up my garden? [Well, hide the spade, then. - Ed.] You may also recall that, at that time, I thought I had found the perfect solution. Actually, it wasn’t a solution at all; it hadn’t been watered down. It was, you may remember, urine. Human urine. Mine. Well, after a while, I realised that my solution was a lot of pish. It didn’t work. Old Foxy became so used to the stuff, it made absolutely no difference; he still dug the garden up. The only effect the urine had was to make our garden smell like a shop doorway after the pubs have closed.


Sometimes, a few days would pass and there was no sign of digging. More often than not, however, I was out in the morning with a shovel putting all the disturbed soil back into my ‘garden’ or oversized garden tub as it is more accurately described. Foxes are brilliant diggers, I have admit. Often the hole was more than two feet deep. You can imagine the mess of the surrounding area, with the soil from a hole that big strewn all over it.


The end of my tether was reached long ago, but I had to try and find a way to beat old foxy. This was war. Somebody told me that foxes really hate those blue slug pellet things, so I sprinkled enough of them over my garden to kill off every slug and snail for miles around. There was more blue than brown. Did it stop Mr Fox? Did it fu... No it didn’t.


Next, I saw an advertisement for a solar-powered, motion-activated, ultrasonic cat and fox repeller. The device is ultrasonic; not the cats and foxes. Any road up, I purchased one of these gadgets. I assembled it and placed it in the garden at the very spot that Foxy likes to dig. I then sat inside my living room in a position where I could watch what happened next. Sure enough, Foxy appeared. Now we’ll see if this clever ultrasonic thingy worked. Foxy barely noticed it. He just jumped up into the same spot he always dug and proceeded to scatter soil as before. Right next to the gadget. You may well have heard my screams.


Was there no way to stop this battle? I have come up with another solution (no not that again) and, this time, I do believe it will work. I have taken a large piece of heavy wire mesh... I’ll give you an idea of just how heavy. The wire is about an eighth of an inch in diameter (that’s 3mm in new money) and, when it came to cutting it to size, wirecutters couldn’t cope; I had to use a hacksaw. [That is so interesting. Yawn. - Ed.] So, I cut this sheet of mesh oversize so that, with a bit of twisting and bending it is tucked under the top layer of bricks and sits flat on top of the soil. No fox is going to shift that... unless he uses a hacksaw. Mind you, I wouldn’t be at all surprised if he could.


So, is that the end of the story? Almost. I told a friend of mine about this brilliant piece of engineering. I won’t tell you his profession but, if I tell you he tends to work on Sundays, you might work it out. He made a suggestion to improve this garden fortress... ‘Why don’t you run a high voltage through the grid? Foxy won’t see that coming.’ How very un-christian, I thought. I was shocked. [No, the fox would be shocked, surely. - Ed.] Don’t call me Shirley.


Incidentally, I think the designer of that sonar animal repeller might be a fan of a certain Disney/Pixar film... 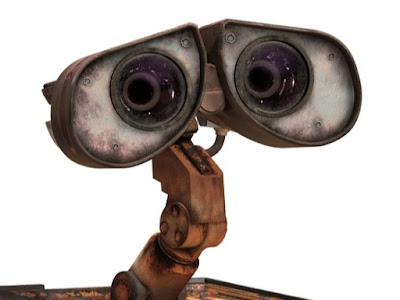 What do you think? Wall e is the top one the animal detector is on the lower picture... or is it the other way round?

You know my views on footballers wages, don’t you? The players in the top teams in the top divisions around the world get paid far too much, in my opinion. Apparently, the Welsh wonder winger, Gareth Bale, has been offered a deal worth £91 million to commit his future to Real Madrid. Excuse me? This is one person we are talking about, not the national debt of a small nation. £91 million? That is obscene. Also obscene is the demand from Arsenal players Mesut Ozil and Alexis Sanchez who each want £250,000 in wages per week. You read that correctly. Per week. They are citing the fall in the value of the pound against the euro. Come off it. Ozil already gets... I nearly said earns... 200 grand a week having been given a 60 grand pay increase just four months ago. So, having already had his pay increased by over 40 per cent (a little bit more than the rate of inflation) he wants to increase it by a further 25 per cent. So, poor old Ozil can’t manage on a mere 10.4 million quid a year. He needs 13 million. Greedy fu... [I’ll have to stop you there. - Ed.].... I blame Jimmy Hill. I do.

Let’s move on to grambling matters. What happened last week? Well, it was a little bit better than the previous week. But, not much. We won 69 pees. That’s 11 pees up. Still rubbish, though. What happened? Read on...


Apostolos Vellios gave the visitors an early lead at Ashton Gate as he found the back of the net via the post.


The home side pressed for an equaliser after the break and Abraham netted his 11th goal of the season when he pounced on a mistake from Danny Fox and rounded goalkeeper Vladimir Stojkovic before slotting in from a tight angle.


Three minutes later, City turned the game on its head as a long free-kick was headed down in the box by Abraham allowing Jamie Paterson the simplest of goals.


The home side were second best for periods before half-time, but improved after the break and Michael Raynes forced Sam Walker to tip his close-range header on to the crossbar.


Raynes was involved again when Jason Kennedy gave Carlisle the lead in the 50th minute, the defender heading Nicky Adams' corner back across the face of goal for Kennedy to force home.


Colchester missed a great chance to level the scores in the 66th minute when Sammie Szmodics found himself one-on-one with Gillespie but lifted the ball over the goalkeeper and over the bar from eight yards.


Szmodics then had a diving header cleared off the line, but substitute Jabo Ibehre relieved the tension in the 79th minute when his header from Danny Grainger's corner on the left slipped through Walker's hands and into the net.


Argyle striker Jimmy Spencer scored a superb 39th-minute opener, shimmying his way past two defenders before sending an angled strike from the right into the far top corner.


Yeovil's response was swift as skipper Darren Ward tapped in from a few yards out as Argyle failed to deal with a low 45th-minute cross from the right-hand side of the penalty area.


The Glovers should have levelled in the 50th minute when Ward's far-post cross fell to unmarked left-back Nathan Smith, whose diving header flew wide.


Playmaker Graham Carey nonchalantly swept the ball home on the run from 25 yards into the top corner as he spotted Krysiak out of position after 71 minutes to make it 3-1.


Ah well, once again The Grambler’s predictions were a bit... crap. Let’s see what he/she/it has randomly selected for this week. Unfortunately, the number of matches available for consideration was pretty meagre as the top league’s have all shut down thanks to something called World Cup Qualifiers. I wish FIFA would give The Grambler some consideration when it stages these games.

Teaser time. Yay! Last week I asked you which manager the Ricky Tomlinson character Mike Bassett was based on. The answer was Graham Taylor. Did you not like that?


One for this week. In September 2013 which former Labour politician was escorted from his seat in the home section of Fulham's Craven Cottage ground after 'wildly celebrating' a goal scored by visitors Cardiff City in a Premier League fixture? Quite an easy one that. Even Mrs G, whose knowledge of football is next to nothing, got that.

And finally, Cyril? And finally Esther, I am indebted to Messrs D. Morgan and A. O’Hanlon for this week’s closing link, a memorable moment or two from  Fathers Ted and Dougal. .