Week 35 - The Grambler and Scooby Doo

I was out with friends a while back and, as I was the designated misery guts aka driver, I had to stick to non-alcoholic beverages. Now, I don’t much like sugary soft drinks and you can only take so much coffee of an evening so I opted to have a no-alcohol lager. ‘Have you got any Beck’s Blue?’ I asked the barman, whose response shocked me a little. ‘We’ve got hee haw,’ was his reply.


Now for those of you who do not live in Scotland, I should explain that hee haw is a typically Glaswegian term meaning nothing, zero, zilch. It is derived from the even worse f*** all. The pronunciation of ‘all’ usually being aw. Thus, hee haw is actually rhyming slang.


That is just so typical of the Glasgow sense of humour and the playful way the language is altered. I think I have mentioned other slang terms such as the now universal use of Ruby for curry, or a pint of Mick for lager and don’t forget the wonderful Jon Bons for overalls. Sorry pardon excuse me? John Bon Jovis = ovies = overalls.  A wee Salvi anyone?  A wee Salvador Dali = Swally = drink.


This has all reminded me of the tale of the English boss of a company coming up to Glasgow to find out why a building job was running late and (inadvisably perhaps) going up to a typical worker...


‘Why is this job running behind schedule?’ enquires the boss.


‘Ah hivnae got a scooby.’ replies the workman.


‘Right, if that's what's holding you up, I’ll make sure one gets ordered straight away.’


He must have been the only guy in Britain who didn’t realise that scooby = Scooby Doo = clue.


I have a favourite tale of having fun with words. Cast your collective mind back to 1995-96. Do you remember a band going by the name of Umboza? You don’t? You probably aren’t alone; they didn’t hang around the charts for very long. They were a Scottish outfit who had top 20 hits with a couple of toons. I recall their appearance on Top of the Pops to play their first hit (Cry India - based on a sample of Lionel Ritchie’s All Night Long - click here to give it a listen.) and Peter Powell introducing them as Umboza which made me think, no that’s not right. Why did I think this? Well, I knew the tune and I knew the band and that wasn’t their name. For some reason which I fail to understand, it was considered necessary to change the band's original name when fame came a-calling. What was the name that had to be changed? Mboza Ritchie... It’s all about the pronunciation.

Were any famous or notorious people born on the 8th of April? Of course. Here are some I’ve even heard of. Adrian Boult 1889 (Conductor. [Must have been before the one man buses. - Ed.]), Mary Pickford 1892 (Removals firm.), Sonja Henie 1912 (Skatey bloke.), Ian Smith 1919 (Prahm meenister of Rowdesia.), Carmen McRae 1922 (Jehhhzzz singer. Ready for this week’s first clip? Okeydokey. Here she is providing vocals to Dave Brubeck’s Take Five.), Jacques Brel 1929 (Influential Belgian singer/songwriter. Time for clip two... You might recognise this.), John Gavin 1931 (Actor who became a politician. He was US Ambassador to Mexico from 1981 to 1986.), Kofi Annan 1938 (7th Secretary General of the United Nations.), Vivienne Westwood 1941 (Woman who made binbags fashionable.), Roger Chapman 1942 (Vocalist with the first band I ever saw live. A unique voice, I am sure you will agree. Clip number three coming up.  All together now... Lay down easy...), James Herbert 1943 (Orfer. Did you know he designed all the covers for his books? You didn’t? Well, he did.), Hywell Bennett 1944 (Shelley.), Steve Howe 1947 (Geetarist. Clip number four... here is a young Mr Howe and his party piece The Clap.), Jeffrey Isbell aka Izzy Stradlin 1962 (A Gun or a Rose. He co-wrote this week’s clip number five...  I'll name that tune in one.), Julian Lennon 1963 (Singer with an ever-so-slightly more famous dad. Ready for clip number six? Here’s Saltwater.), Alec Stewart 1963 (Crickety wickety bloke.) and Mark Blundell 1966 (Racey car bloke.).

Let’s move on to grambling matters. How did we do last week? Better than the week before, I can tell you. We got a return of £2.09 on our bet. So, only 11 pees down. What happened? Read on...


Billy Bodin fired the hosts in front from the penalty spot in the 54th minute after being fouled inside the box by Aristote Nsiala when there appeared no danger.


And Bodin made sure of the points seven minutes from time, showing neat skills to set himself up for a crisp right-footed finish from 10 yards.


The first half was most notable for the two yellow cards picked up by Shrewsbury midfielder Ryan Yates, sent off for a sliding late challenge on Rovers goalkeeper Joe Lumley in the 41th minute, having previously been booked for a foul on Bodin.


Fleetwood made most of the early running in this match, with their best opportunity coming when David Ball picked out Kyle Dempsey, only for Ash Hunter to be unable to get a toe on the through-ball as Lawrence Vigouroux gathered


Swindon might have grabbed the lead on the half hour, against the run of play as Thomas let fly with a snap-shot from the edge of the box which forced a superb diving save from Alex Cairns.


Fleetwood continued to be frustrated after half-time, and Uwe Rosler threw on two substitutes in a bid to shake up an average display.


But it was Swindon who found another gear, Thomas poking just wide having been left unmarket at the near post.


And with nine minutes remaining Nicky Ajose scored the only goal of the match. Running onto a long through-ball from Charlie Colkett he got the wrong side of Ashley Eastham before slotting low under Cairns to claim the victory.


Shaun Williams put Millwall ahead when he converted an early penalty after Shaun Hutchinson was brought down by Paddy Madden in the second minute.


Millwall should have doubled their lead in 31st minute, Steve Morison finding Jed Wallace at the back post, but the winger's effort went high and wide.


Ivan Toney's half-volley from 25 yards was tipped over the bar by Tom King as Scunthorpe looked for a way back into the game after the restart.


Wallace missed another good chance when he blazed over from 12 yards with the goal at his mercy.


However, Millwall got a deserved two-goal lead in 57th minute when Shane Ferguson tapped in Wallace's cross from close range.


Aiden O'Brien then got himself on the scoresheet after 68 minutes with a lovely finish, flicking Tony Craig's teasing ball beyond Joe Anyon.


Matt Crooks pulled a goal back when he nodded in a free-kick in the third minute of added time.


In a low-key affair of few chances, Rochdale looked to have secured the points when NathanielMendez-Laing curled home a neat finish from the edge of the area in the 57th minute.


Northampton’s Paul Anderson sent a side-footed attempt narrowly wide of Conrad Logan's post and went even closer minutes later when his firm header towards the roof of the net was palmed away by the Dale goalkeeper.


But Anderson raced onto a hopeful punt upfield by Adam Smith and lifted the ball over a stranded Logan to give the visitors a draw three minutes into time added on.


The Shrimpers had influential midfielder Ryan Leonard sent off 20 minutes from time when the game was still goalless.


But strikes from Nile Ranger and Theo Robinson and a stoppage-time penalty by Anthony Wordsworth saw them secure a hard-fought victory.

Can The Grambler improve enough to make us a wee profit this week? [Doubtful. - Ed.] Here are his/her/its predictions for this week...

All matches kick off at 3pm on Saturday the 8th of April. The bets have been placed (10 x 20 pee doubles plus 1 x 20 pee accumulator) and if they all go according to The Grambler’s Prediction, the Bobby Moore Fund stands to receive a whopping...


That is quite whopping... even more whopping than last week.


Teaser time. Yay! Last week I asked you which player has scored the most times in a Liverpool derby. The answer should be obvious, really; Liverpool’s greatest ever goalscorer, Ian Rush. He scored 25 goals against Everton. He played 660 games for Liverpool in his career and scored 346 goals.


One for this week? I’m going to stick with the same topic. Sort of. The only player to come close to Rush’s record scored 19 goals in Liverpool derbies and in a career of 447 games scored a staggering 390 goals. Who was that man? Easy peasy.


And finally, Cyril? And finally Esther, I don’t normally mark the anniversary of somebody dying, but this week I am making an exception. A little teaser to finish... Who died on April the 8th four years ago? Need a clue?  This should help... 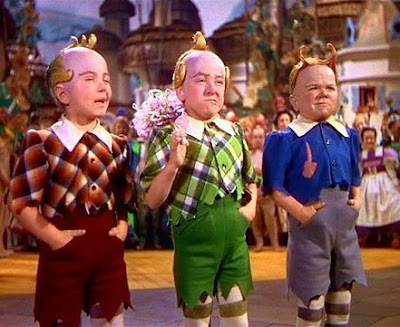 Incidentally, the chap in the middle,
actor Jerry Malen, is the last surviving ‘Munchkin’