Week 1 - The Grambler on Neymar

The more observant amongst you may have noticed that the last edition of your favourite ill-informed blog was numbered as week 50 whereas this week’s is only numbered as 1. That can only mean one thing... Happy new football season! Yay!!! No more donkeys!


I have just eaten a packet of crisps. Not a particularly interesting start to this week’s (g)ramble, I admit, but everything has to begin somehow. Why did I tell you this riveting fact? As I was eating them, I suddenly had a craving for what was, in my opinion, the crisp with the best flavour ever. Bovril. Yep, that meat-based beverage drunk at football grounds throughout the land. There was once a manufacturer of potato snacks - Tudor - that produced a crisp of that flavour. Isn’t it odd what triggers the memory?


Whatever happened to Tudor crisps, anyway? They really were the dog’s bollocks when I were a nipper. Not only did they have the best crisp flavours, they gave away free gifts. You used to be able to save tokens to get these freebies. Who can remember the fantastic Wear-em Scare-ems? Actually, they were neither fantastic nor scary; they were just bits of metal with a supposedly scary face on them. No matter, a free gift is a free gift and, whether it was complete sh*t or not, everybody just had to have them. Of course, free didn’t really mean free, did it? When you sent off for an example of said free gift, you had to enclose a postal order (Do you still get them?) to cover postage and packing. The cost of this postal order was probably about 50 times the value of the wonderful gift. Plus, you had to eat about 50 bags of crisps to get a single gift... and there was something like a dozen to collect. I think I managed to send for exactly one of the set, because, by the time I had saved enough tokens, I was utterly sick of crisps... even Bovril flavoured ones. 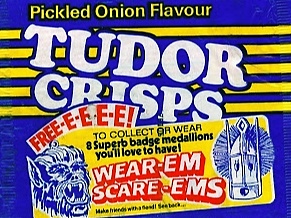 
I was always sending for freebies when I was a kid. My older brother was a keen motorcyclist and bought a weekly magazine which covered all aspects of motorcycling. Every week, there was a printed card inside the mag which advertised Duckham’s oil. You could send this off to receive a free keyring. This time, it really was free; you didn’t even have to put a stamp on the card. I must have amassed about two dozen keyrings before Duckham’s presumably twigged that they were losing money and stopped putting those cards in the magazines. 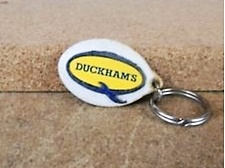 Duckham's keyring...
Worth a mint on ebay


Another thing I loved doing was writing letters of complaint if I thought something wasn’t quite right. Do you remember Bazooka Joe bubble gum? They cost one penny and, as well as a piece of gum, there was a Bazooka Joe strip cartoon inside the wrapper. Well, I used to save these, not particularly funny, cartoons. However, I was a bit miffed when I opened a packet to find that the strip had been guillotined in the wrong place so that I had two half strips. Time to put pen to paper thinks I (aged 8). After a few days, I received a parcel which contained a letter of apology from the company explaining that the packaging process could not check that each cartoon strip was cut perfectly and would I accept this box of Bazooka Joe bubble gum as a goodwill gesture. The box held 144 (a gross) blocks of bubble gum. What did I do? Give them to my friends? Not on your Nellie. I was eight, for goodness’ sake; I hadn’t yet learned that thing called generosity (although, I soon would). Sell them? I was eight, for goodness’ sake; I hadn’t yet learned about greedy entreprenuerial enterprise. I had learned about greed, though. I attempted to chew my way through the entire box of gum. You can guess the outcome. Before very long, I was feeling rather unwell. My friends (and I) then discovered an unknown side to my character... actual generosity. I happily distributed the remaining blocks of gum to anyone who wanted them. Incidentally, I have never chewed gum since that time. Even today, half a century on, I just hate chewing gum. The very thought of it takes me back to that childhood incident. Bleurgh! as Bazooka Joe himself might have said. 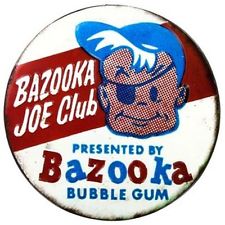 
Well, I can announce that the football world has officially gone bonkers in the nut.  Until today the highest transfer fee paid for any player, anywhere, ever, was the 89.3 million quids Manchester United threw at Juventus last year.  You would think that that record payout might be broken eventually.  Maybe 100 million would be paid out some time in the future.  It's called inflation.  Whoever is in charge of the cheque book at Paris Saint Germain obviously thought if you are going to break the record, do it in style.  The club has just paid Barcelona 200 million quid for Neymar.  You read that correctly, 200 million quid.  For one bloke who is good at kicking a ball about?  There's more.  Neymar is not only the most expensive player ever, he will be the highest paid.  He will be getting (I nearly said earning) £782,000 per week.  Not per year.  Per week.  Crazy money.  Utterly crazy.  I blame Jimmy Hill.  I do.
.....oooOooo.....
Were any famous or notorious people born on the 5th of August? Of course. Here are some I’ve even heard of. Joseph Merrick 1862 (Exhibited in a freak show as the Elephant Man, Merrick’s severe deformities were never explained during his lifetime. It has since been speculated that he suffered from a rare congenital disorder known as Proteus Syndrome.), Joan Hickson 1906 (Miss Marple.), John Huston 1906 (Film director, screenwriter and actor. Son of Walter and father of Angelica.), Robert Taylor 1911 (Actor. A chain-smoker, he died of lung cancer aged 57.), Neil Armstrong 1930 (Bloke that walked somewhere no one else had been. Okay, there was a bit more to it than that.), Gay Byrne 1934 (Irish TV host.), Roger Clark 1939 (Rallying bloke.), Loni Anderson 1945 (Actress who no longer looks like Loni Anderson, thanks to some ‘surgery’.), Rick Derringer 1947 (Guitarist, vocalist and producer. Did you know he was lead vocalist on this?  No? Well, he was.), Ray Clemence 1948 (Footy bloke.), Barbara Flynn 1948 (Actress. Freda Ashton. One for fans of 1970s’ drama ‘Family at War’ there.), Louis Walsh 1952 (Manager of famous Irish acts Johnny Logan, Boyzone and Westlife who became famous himself.), Pete Burns 1959 (Singer with Dead or Alive. [Dead, definitely. - Ed.] Here he is spinning right round with their biggest hit.), Janet McTeer 1961 (Ectress, don’tcha know. Vita Sackville West, that was her.), Marine Le Pen 1968 (French politician.), Colin McRae 1968 (Rallying bloke.), Dan Hipgrave 1975 (Writer and guitarist. He is in a band named after... erm... a washing machine? Have a link.) and Wayne Bridge 1980 (Footy bloke.).


We are both great fans of the band Toploader. You included their hit, Achilles Heel, but didn’t they have another big hit prior to that one?


Well, are you ready for this? The first bet of the 2017-18 footy season? Let’s see what The Grambler has predicted for us. All games kick off at 3.00pm on Saturday the 5th of August...


Hmm... For the first gramble of the new season The Grambler has not only picked five games from the same division (One, or three in old money), but has selected all the teams that were promoted at the end of last season. Odd.


Anyway, the bets have been placed (10 x 20 pee doubles plus 1 x 20 pee accumulator) and if they all go according to The Grambler’s Prediction, the Bobby Moore Fund stands to receive a whopping...


Teaser time. Yay! Last week I asked you who was voted the player of the tournament at the 2014 World Cup finals, but seemed embarrassed at the award. The answer was Lionel Messi. Why was he a bit embarrassed? Well, although he had played well in the group stages of the finals he was, let’s say, pretty ordinary in the knockout stages and couldn’t influence the final as he would perhaps have liked. He, like most spectators, might have preferred Neuer or Müller of Germany to be given the award.


One for this week? Let’s have a question relating to a famous Scotsman. Which Scottish international, after his retirement from playing, managed Bristol City, Hearts, Stoke City, then, after a spell as assistant coach at Celtic, Bristol City again, before becoming assistant coach at several clubs, often working with Harry Rednapp? Easy or what?

And finally, Cyril? And finally Esther, I am indebted to Messrs G. Byrne and L. Walsh. Why? Because Mr Byrne was the person who first let the world see a band that would become incredibly famous under the control of Mr Walsh. Boyzone appeared on Gay Byrne’s Late Late Show in 1993. Unfortunately, Mr Byrne (and everyone else, for that matter) didn’t really see the group as having potential. See what you think. Here is this week’s closing clip from a show called Before They Were Famous.