Week 30 - Grambling with another bit of Red Dwarf

Here is a telephone response to an MOD official from an air base commander which definitely, absolutely, unequivocally (That’s a good word; must look it up) took place...


‘What’s that? There’s an airborne invasion heading our way? You want us to get all combat aircraft in the air now? (sharp intake of breath) Sorry mate. In this weather? No chance. I’ve got to think of my lads. There’s no possibility they can fly until the snow clears. Health and safety and all that. Tell you what; see if you can get whoever it is to attack us when the weather warms up a bit.’


All right, maybe I did make that up, but in a way it sums up Britain’s way of dealing with a heavy snowfall. Basically, the country just grinds to a halt.


And so it was, three days into the bad weather of last week, fuel stations had run out of diesel, supermarkets had run out of bread and milk and, worst of all, the Grambler’s Kick Cancer’s Big Fat Backside Quiz of the Year had to be postponed until a later date.


We had everything planned to ‘the nth degree’ as buzzworders like to put it.


Everything us organisers had no control over, that’s what.


The rotten weather put paid to the whole shebang.


The day before the quiz was due to take place, I had a telephone call from somebody at the venue. The first problem was that the barstaff wouldn’t be able to reach the venue because the roads were blocked and they were snowed in. Come on... What kind of an excuse is that? Haven’t they got shovels to dig themselves out? Can’t drive on the road? Surely they could fashion some snowshoes out of a couple of tennis rackets and walk. I don’t know, some people just won’t make the effort these days.


The next problem was that the car park at the venue was solid ice and pretty treacherous; someone might fall. And? Your point is? You mean to tell me that the threat of a few broken limbs is a serious enough reason to cancel? Do me a favour.


The third problem was that the booze hadn’t been delivered and wasn’t going to be until at least two days after the quiz... Wait a minute, a quiz without booze? I tell you what; why don’t we postpone it?


Okay, I didn’t really behave like that. It was a shame that our fundraising highlight of the year had to be put off till another time, but these things happen. We will hopefully reschedule the event for a time when the weather is less unpredictable. [When is that? You live in Scotland. Weather doesn’t do predictable. - Ed.]


Of course, having to cancel did present us with another dilemma... What do we do with enough loaves of bread to fill a skip?


I was pleased that you gave us a link to the wonderful Glenn Miller Orchestra; one of my all time faves. Here is a question for you. What was the tune that Miller made famous but it was used as the signature tune of the British bandleader, Joe Loss?


Apologies to everyone for typing Burnley instead of Bournemouth last week. Hope it didn’t confuse anyone too much.


Here are some lines from the Daily Telepharg...


There was a moment midway through the second half which gave perfect summary of the level of this match. Southampton’s Nathan Redmond spun past two players and passed to Mario Lemina, well placed just outside the Stoke box. His shot missed the target by several yards.


From Stoke’s ensuing goal-kick, the ball headed quickly forward to Maxim Choupo-Moting, who suddenly found himself clear in front of the Southampton goal. To ironic cheers from the home support, his shot disappeared into the empty seats behind the net.


Bobby Reid scored the first hat-trick of his career as Bristol City swept aside Sheffield Wednesday. City were three up before half time; Reid twice produced fine low finishes, the first after a one-two with Josh Brownhill, who made it 3-0 himself following Jamie Paterson's backheel.


Reid netted his 19th of the season from the spot after Marlon Pack was fouled.


Wednesday did create a couple of good chances - with Atdhe Nuhiu blazing their best opportunity over the bar when the score was 1-0.


Sunderland led when Bryan Oviedo played a neat one-two with Aiden McGeady before firing home past Millwall keeper Jordan Archer from outside the box.


The hosts were level after the Black Cats failed to clear a goalmouth scramble and Shaun Hutchinson poked in. [I say! Steady on. - Ed.]


Joe Lolley put Forest ahead on five minutes with a low strike after a slick move.


Blues had chances to level, notably through Maikel Kieftenbeld, who blazed an effort over from 15 yards.


Matty Cash's low second-half strike ensured a victory which was in question after Michael Morrison's late header for Birmingham.

Three ’It the bars! Would you Adam and Eve it! The Grambler was so close to getting all five spot on there. Can he/she/it improve on things this week? Let’s see the predictions...

Let’s see how much we could win in the unlikely event that the results go as predicted.


And finally, Cyril? And finally Esther, I am indebted to a Mr R. Llewellyn, one of this week’s birthday celebrants. Perhaps you don’t know the name, but you might recognise his most famous role... 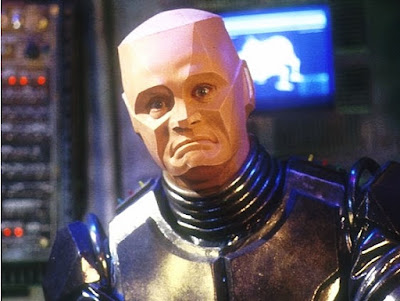 The character of Kryten was originally seen just once in series 2 of the science fiction comedy [Unusual to see those terms linked. Science fiction and nerdy geek are more usually seen together. - Ed.] Red Dwarf.  The 'mechanoid' was portrayed as a butler who was still helpfully serving his 'owners' on a spacecraft even though the entire crew was dead.  The character was obviously based on the J.M. Barrie play 'The Admirable Crichton', hence the name.  For series 3 Kryten was introduced as a permanent character and was portrayed by a different actor (Llewellyn).  His inclusion added a new dimension to the comedy so let’s end with a few Kryten lines from Red Dwarf...

Kryten: Mr Lister sir can't you see that your behaviour is totally irrational?


Rimmer: In which case we can relieve him of duty as per Space Corp Directive 196156.


Kryten: 196156? Any officer caught sniffing the saddle of the exercise bicycle in the women's gym will be discharged without trial. Hmm, I'm sorry sir but that doesn't quite get to the nub of the matter for me.


Kryten: 68250? But sir surely that's impossible without at least one live chicken and a rabbi?


Rimmer: I've no idea who you are but boarding this vessel is an act of war. Ergo we surrender, and as prisoners of war I invoke the all nations agreement article 39436175880932-B.


Rimmer: Can't you let just ONE go? I was talking about the right of POW's to non-violent constraint.


Rimmer: May I remind you all of Space Corp Directive 34124.


Kryten: 34124? No officer with false teeth should attempt oral sex in zero gravity.


Kryten: 1742? No member of the Corp should report for duty in a ginger toupee.


Kryten: Well Space Corp Directive 195 clearly states that in an emergency power situation, a hologrammatic crewmember must give up his life in order that the living crewmembers might survive.


Kryten: What about the Space Corp Directive which states that it is our primary overriding duty to contact other life forms, exchange information and wherever possible bring them home?


Rimmer: What about the Rimmer Directive which states never tangle with anything which has more teeth than the entire Osmond family?


[Starbug is threatened by a giant rogue asteroid that could be a mere illusion.]
Kryten: Suggest we maintain course. That asteroid does not exist.
Rimmer: Suppose you're wrong?
Kryten: Sir, I'll stake my reputation on it.
Rimmer: Kryten, you haven't got a reputation.
Kryten: No, sir, but I'm hoping to acquire one from this escapade.


Kryten: I’m up and down more often than a pair of kangaroos in the mating season!


Rimmer: We can’t afford to take any chances. Jump up to red alert.
Kryten: Are you sure, sir? It does mean changing the bulb.


Kryten: My goodness, I do believe I’m drunk. I suddenly feel the need to strut my funky stuff!


Lister: “To the lease holder of Kryten 2X4B 523P.” That’s your full name?
Kryten: Yes, but personally I don’t much like the 2X4B. I think it’s a jerky middle name. Still, it could be worse. I once knew an android whose middle name was 2Q4B. Poor sucker!


Lister: Kryten! Are you okay, man?


Kryten: I have a medium-sized fire axe buried in my spinal column. That sort of thing can really put a crimp on your day.


Kryten: Oh, screw down my diodes and call me Frank!