Week 8 - It's the late late Grambler, once more


Those of you of a certain age may remember old Denis... and, believe me, he was old... as the presenter of a programme called It'll be Alright on the Night; a selection of out-takes and mistakes that obviously couldn't be used.... except on a programme like this. It was hilarious. (It says here). It began over 40 years ago when Den was already in his mid fifties and seemed to run for eons (him as well as the programme).


I shouldn't mock it, because it's popularity was such that it seemed every comedy programme from then on copied the idea and had a few out takes tagged on at the end. Oh how we laughed.


Eventually, the genre (That's a good word. Must look it up.) became a parody of itself with even animators making short films of ‘bloopers’ to tag on the end of the main feature. Toy Story, for example, got the treatment.


Any road up, back to Mr Norden. Many are perhaps unaware that It'll be Alright on the Night was a late career move for him; he had started his show business career as a comedy script writer with Frank Muir. After some years as simply writers, tv and radio producers realised that their wit could actually be used in performing roles... Well, if appearing on panel games counts as performing. Thus, the two of them began a second career and became a sort of double act on programmes such as My Word and its spin off My Music.
However, I'm moving too quickly here, it was the first career which should interest us more. From the late nineteen forties through to the early nineteen sixties, Muir and Norden wrote for many radio and television comedies.


Their first huge success was a programme called Take It From Here which starred Jimmy Edwards, Dick Bentley and June Whitfield. I've actually used a clip from the programme as part of thegrambler.com in the past. They stuck with Jimmy Edwards when he moved to tv and wrote his series Whack-O which was about a crooked headmaster at a public school for boys. They followed that with another series for him entitled Faces of Jim.


Here's a factoid for you. Do you remember the film Carry On Cleo? The part where Kenneth Williams as Julius Caesar gets his comeuppance, he utters the most memorable Carry On line ever... 'Infamy. Infamy. They've all got it on for me.' Okay, it doesn't look so amusing when it's written down like that, but it was. Believe me. Anyway, it was a gag written by Muir and Norden. So now you know.


They carried on writing together but this would eventually take a back seat as their tv and radio appearance work took over. The partnership lasted over fifty years.


I have always been a great fan of singer and actress Billie Piper and am so pleased that you included one of her songs in this week’s edition. The song you gave a link to was her first number one single. The second number one was called Girlfriend. Here’s a teaser for you, can you remember her third and, to date, final number one record?


Yours with knobs on,

Let’s move onto grambling matters. How did last week’s bet fare? All right, actually. Made a wee profit for once. Not much. 30 pees. Better than a poke in the eye with a wet fish. What happened? Read on...

Newcastle vs Arsenal - Prediction Away win


Despite being frustrated in the first half, Granit Xhaka opened the scoring for the Gunners with an excellent long-range free-kick after the break, before Mesut Ozil followed up Alexandre Lacazette's blocked effort to double the advantage.


Ciaran Clark responded in stoppage time for the hosts.

Coventry vs Barnsley - Prediction Away win


Conor Chaplin should have given the home side an early breakthrough when he somehow side-footed wide from six yards.


Jacob Brown spurned two clear-cut chances for Barnsley, firstly when he intercepted Junior Brown's backpass only to see goalkeeper Lee Burge touch his low shot on to a post before firing wide when well-placed from Mamadou Thiam's low cross.


Burge tipped Thiam's 20-yard curler over the bar five minutes into the second half, but at the other end, City were denied when Chaplin's fierce finish from a Jonson Clarke-Harris knockdown was disallowed for offside in the build-up.


An end-to-end affair saw scrambles in both boxes but City snatched the winner when Michael Doyle's free-kick was headed back inside by Dominic Hyam and Jordan Willis hurled himself forward to bundle in from close range.

Macclesfield vs Lincoln - Prediction Away win


The Imps had had an alarmingly easy afternoon at the Moss Rose but looked to have thrown two points away when Jamie Grimes scrambled in an equaliser five minutes from time, cancelling out Tom Pett's first-half goal.


But centre-back Jason Shackell fired in through a crowd of players to increase the misery for second-bottom Macclesfield and keep Lincoln riding high.


In truth the struggling Silkmen had been overrun in a one-sided game, only the heroics of goalkeeper Kieran O'Hara seemingly earning a reward after impressively denying John Akinde, Pett and Harry Anderson.


O'Hara had performed heroics with his side barely able to lay a glove on their high-flying guests as Macclesfield's torment continued late into the game.


That was until Grimes pounced during a goalmouth scramble but, while Lincoln were not at their best, Shackell's goal moments later was enough for the win.


Match report? Ha ha ha ha... This is a Scottish League One game and therefore unrecognised by the Beeb Beeb Ceeb.


Berwick vs Elgin - Prediction Away win


Okey dokey, let’s have a look what The Grambler has come up with this week.

Hmm... That is distinctly unwhopping.

As this week’s edition is so late, I can tell you that these predictions turned out to be a bit rubbishy, only two proving to be correct. Sorry about that.

Teaser time. Yay! Last week I asked you which club dropped Boscombe from its name in 1972. The answer, of course, is Premiershit team A.F.C. Bournemouth.


That was too easy, don’t you think? How about one for this week? Here’s a good un... What connects the football clubs Southamption, Darlington and Plymouth Argyle?  Hint: it's to do with nicknames.  Hmm... very interesting.


And finally, Cyril? And finally, Esther, I am indebted to a Messrs D. Norden and F. Muir who provide us with our final clip of the week.


Long long ago, when you went to the cinema, you didn't just watch one film and that was it, as happens nowadays. This is relevant, I assure you. There used to be an accompanying film (a 'B' movie), a news report and, sometimes, another short, informative film. Often, these took the form of travelogues about far off exotic lands which the average Brit had only ever read about in books; places like Tahiti, Peru or Bali might feature.


The clip I am giving you a link to is a spoof travelogue written by Muir and Norden. Ladeez and genullum, please enjoy Balham - Gateway to the South. 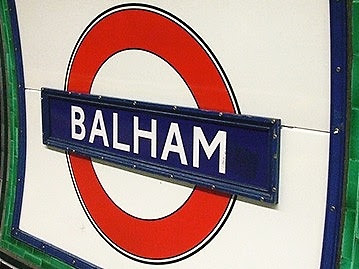