Week 21 - The Grambler has a haircut

I've just been for a haircut [Really? How interesting. Yawn. - Ed.] Just a number two at the back and a little off the top. Ooh, and a trim of the eyebrows. And the ears got a burning bit of cotton wool swung at them. [Is this relevant? - Ed.] Relevant? Not really, but you will realise from the brief description that this was a Turkish barber I was visiting. Not in Turkey, you understand, but here in polomint city.


There seems to have been quite a proliferation (That’s a good word. Wonder what it means.) of Turkish barbers setting up business in the town and it started me wondering... Is this a way round immigration restrictions?


Racist? Me? Never. Mind you, the wee barber I go to... That's the premises, not the guy who cuts the hair... did raise some suspicions.


When I first went, there was a talkative guy ran the one man operation. Blimey, he could rabbit. A haircut should have lasted less than ten minutes; with him, you could bet on it lasting twice that. I learnt all about his family and how his brother owned another barber shop in another part of the town. I also learned that he was something of a racist which struck me as odd considering his background.


Any road up, after a while, another, younger, Turkish guy took over. In his not very fluent English, he told me he was working for his 'uncle'.


The next time I went, another young Turkish guy was running the shop. He said, in broken English, that he was the other guy's 'cousin'.


That was when I began wondering about the immigration thing. Was this shop just a front to get so called family members into the country?


The next time I went, nephew number one was back in charge and I discovered that he and his cousin were sharing the shop, one working three days, the other working four.


So my immigration theory was wrong, I'm pleased to say. Since that time I have made a couple of visits and he manages to get some information across as his English improves. I know which football team he likes... Borussia Dortmund in case you were interested. I know that he goes to college on a Monday to improve his English.


Anyway, on this most recent visit he asked me how I had enjoyed the holiday (Christmas). I told him that it had been quite boisterous with our grandchildren aged five, seven and nine. I realised then that, although he was able to ask a question, he wasn't quite able to grasp the answer because, after thinking for a minute, he asked if they were all the same age.


I then tried to explain that they had all had chicken pox over the holiday. That was perhaps a step too far. He wanted to know if that was what we had instead of turkey. The more I tried to explain what it was, the less he seemed to understand what I was prattling on about and asked if they liked chicken.


He muttered the words 'chicken pox' a few times as if he was enjoying the sound of the words, then he stopped cutting my hair and picked up his phone to check the internet for chicken pox. I think it made his day when he found out exactly what it was.  He had learned something new.  I reckon the next time he met his English teacher he would be desperate to tell him of his new-found knowledge.


My views on immigration, in typical grambler fashion, tend to be the opposite of those you hear on the news bulletins. What makes somebody want to give up everything to move to another country where they cannot even speak the language? Maybe they live in abject poverty. Perhaps they are living in fear of persecution. Whatever it is, it’s a brave decision to up sticks and head into the unknown the way some people do.


It always strikes me as odd when I hear Brits bleating on about there being too much immigration; Britain was built on immigration... The Saxons, Vikings, Normans, Irish, Indians, West Indians and now eastern Europeans have all arrived down the years as well as people from countless other starting points. Eventually, they all fit in to and shape the culture of their new chosen country.


So all this talk about reducing immigration is just nonsense spouted by hateful jingoistic types who think that any change is a bad thing.


Britain is a melting pot of peoples. Long may it continue.


Thank you for giving us a song from Des O’Connor. He is a very amusing comedian, as we all know, but he was also a talented singer. He had a number one with his song I Pretend, but I believe he had a top ten hit prior to that one. I can’t remember what it was called. Can you assist?

Let’s move onto grambling matters. What happened last week? A little better than the previous week. At least we got something back. Okay, it was only 66 pees. Better than a smack in the puss. What happened? Read on...

Hmm... not a great showing from The Grambler. Can he/she/it improve this week? Let’s see this week’s predictions.

Teaser time. Yay! Last week I asked you what Sutton’s goalkeeping coach, Wayne Shaw, was doing during the cup between Sutton and Arsenal that resulted in him receiving a fine? He ate a pie. Is that all, I hear you ask. Well, no. Here is the Daily Telegraph article on the matter (in full).


Former Sutton United goalkeeper Wayne Shaw has been charged with breaching betting rules after eating a pie live on television.


Shaw, who was forced to resign after being filmed eating what he said was “a pasty” during his side’s FA Cup defeat to Arsenal, faces punishment for intentionally influencing a football betting market, and improper conduct.


He was given until 6pm next Friday to respond to the Football Association charges.


The 45-year-old, dubbed the ‘Roly-poly goalie’, ate the pasty in the dugout towards the end of February’s fifth-round tie after a bookmaker had offered odds of 8/1 on him doing so.


As well as being investigated by the FA, the incident was probed by the Gambling Commission, after Sun Bets claimed to have paid out a “five-figure” sum for a bet placed on their promotion.


Shaw, who returned to the game in May after being appointed as AFC Totton's commercial manager, told the Daily Telegraph he would take “legal advice” before deciding whether to accept or deny the charges.


Insisting he had not “put a bet on” himself eating the pasty, he described the incident as “something I’ve done for a little bit of fun” which had been “taken out of all context”.


“Hopefully, common sense will prevail,” he added, comparing the matter to John Terry’s contrived farewell substitution on the final day of the Premier League season, also under investigation by the FA.


Revealing he had shared his bank and mobile phone records with the governing body, he said: “They were looking to obviously get me on spot-fixing.”


Speaking shortly before his appointment at Totton, Shaw told the BBC he had suffered “depression” as a result of the fallout from the affair.


He said: “My world fell in. I was in tears. I had never been sacked in my life. It’s on my mind every day; it probably will be for a long time.


“I’ve been through depression. I wasn’t sleeping right, I could feel myself getting stressed. And I’ve still got that knot in my stomach.”


He added of his departure from Sutton: "It was a situation where I either resigned or they sacked me.


“No-one asked for my side of the story. The club’s knee-jerk reaction was that they wanted nothing to do with it.


Guess what they called the whole affair. Yep, you’ve guessed it ‘Pie-gate’. Groan.


Okay, after all that, how about a teaser for this week? Which Englishman has managed Charlton Athletic, Crystal Palace and Hull City in the Premier League? Answer next week.


And finally Cyril? And finally, Esther, I am indebted to Messrs W. Cobham and, from the birthday honours, G. Duke for this week’s closing item. It is a long time since we finished with an odd album cover, so let’s remedy that with something truly weird from the two gentlemen mentioned. 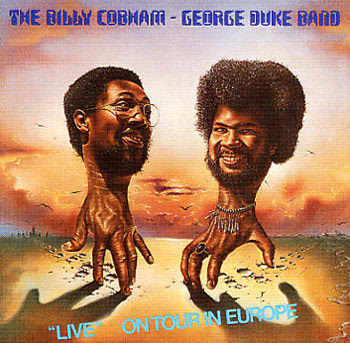 The product of a truly warped imagination.
Don't have nightmares


That’s all for this week folks, but remember you can read the musings of The Grambler every week by going to the blog at www.thegrambler.com
Happy grambling.