How about a joke from resident comic, George, before we begin this week’s (g)ramble? Take it away, George...

A horse walks into a bar and orders a pint...

How does a horse manage to walk into a bar? I mean, for a start, it is very unlikely that a horse would be anywhere near a bar... Unless it was a bar in the countryside and the horse had escaped from its field. Even then, it would be an impossibility for a horse to simply walk into a bar without causing quite a commotion. I would imagine that it would be stopped long before it reached the vicinity of the public house in question.


Let us assume, though, that this bulky equus had somehow managed to get through the low, narrow doorway of a pub... although how it would manipulate a door handle with its hoof, I don’t know... you then suggest that it simply heads to the bar and orders itself a drink. How on earth does he convey that message? It’s a horse, for goodness’ sake. What does he ask for? A pint of Heineighken? Absolute nonsense, the whole idea.


Anyway, you were saying, George? Oh dear... You don’t look very happy. Why the long face?


This week Mrs G and I spent an afternoon in the hottest, sunniest part of the country... Portabello. That sounds rather exotic, doesn't it? Hardly; it is Edinburgh's nearest seaside resort.


For a midweek day at the end of May, it was unusual to see such a crowded beach in Scotland. Normally, the only people brave enough to head to the beach are dog walkers and joggers.


This day, the world and his dog (complete with walker) seemed to have headed to this particular stretch of sandy beach. Who could blame them? There wasn't a cloud on the sky and the temperature was into the low twenties... That is just about tropical to Scots.


Folk were in the sea swimming, others were simply sitting on the beach sunbathing.


One kid, aged about eight or nine, was busy doing what children of that age always do... digging a hole in the sand so that he could sit in it. I wonder why that is. I'm sure I did the same when I were a nipper. I know my own kids did it and the grand kids do it. Odd that sand can have such an effect on generations of children.


Anyway, I digress. This particular kid was repeatedly running between his sandy den and the sea; basically, he was having a rare old time.


His mum sat close by, watching and occasionally joining in. Meanwhile, sat on a bench on the promenade, filming the scene for posterity, was granddad.


How nice. At least, I thought so until 'granddad' put his camera in its case and left without acknowledging his family.


Now then (now then, now then), the whole scene took on a more sinister hue. Who was this man? Was he related to the family on the beach? Why was he filming a small child playing in the sand? All a bit worrying.


Was he perhaps a modern day equivalent of the old bloke this song is about?

Well, it’s been a busy old week news-wise, and the biggest story? Theresa May (be time to do a runner) resigning? As if. Britain coming a humiliating last in the Eurovision song contest and then having that embarrassment compounded by having five points deducted? I should cocoa. No, the biggest, and downright funniest, news story of the week was Miguel Garage having a milk-shake thrown all over him. This, according to news reporters, raised some serious questions. About security, I hear you ask. No, more important than that. Questions need to be answered about why anyone would waste a milk-shake by chucking it over a tw*t like Norbert Farmage. And also, what flavour was it? Hope it was chocolate; he’d have hated that.


It was so nice of you to play a song by that fine performer and charming personality, Mr Perry Como. We are both great fans and recall he had another hit record around the same time as Magic Moments, but neither of us can remember the title. Can you help?


Yours with fondest good wishes,

Let’s move onto grambling matters. What happened the last time we had a bet? We won... ish. 82 pees back from an outlay of £2.20 isn’t very clever, is it?


Oh well, onwards and upwards. Since the footy has now ended for the summer break, we will have to shift our gambling to that other well-known way of losing money, betting on the nags. So can you remember the form? No? Well, I’ll remind you. The Grambler will select five random races from Saturday’s racecard and bets of 20 pees will be placed on each of the favourites from those races. There will also be a five race accumulator bet of 20 pees each way. The each way part of the bet is a way to improve our chances of winning the accumulator because, if any of the gee gees that The Grambler has selected come second, our bet will continue onto the next race. Does that make sense to you? No? Nor me.


Anyway, that’s how the bets will go for the next few weeks until the footy season starts up again. So what has The Grambler randomly selected for this week’s flutter?

Hardly whopping at all.


Teaser time. Yay! Last time I told you about the only times two English teams had contested a European competition final and asked you to name the competitions, the teams and the years in which the finals took place. The answers are that Tottenham Hotspur played Wolverhampton Wanderers in the two-leg final of the UEFA Cup in 1972. Spurs won that 3-2 on aggregate. The other English final occured in the Champions League final of 2008 when Manchester United played Chelsea. Man U won that one on penalties (6-5) when the game finished 1-1 after extra time.


One for this week? Sticking with European competitions, there used to be a competition called the Inter-Cities Fairs Cup. [Really, how interesting. - Ed.] It only ran between the years 1956 and 1971, but two English sides won it twice each. (Does that make sense?) Can you name them, without resorting to Googly, that is? [No. I win. - Ed.]

And finally Cyril? And finally, Esther, I am indebted to a Mr P. Silvers, a Vaudeville comedian who starred in his own very famous comedy series between 1955 and 1959 during which time 143 episodes were shown. It was named simply The Phil Silvers Show, but everyone remembers it as Bilko, the name of the scheming, but workshy character he played. The programme was so popular that animators Hanna and Barbera made a cartoon version of it featuring some of the characters as alley cats. The main character, Top Cat or TC, was a straight copy of Bilko. To finish, here is the first Phil Silvers Show to be transmitted.  I do hope you enjoy it. 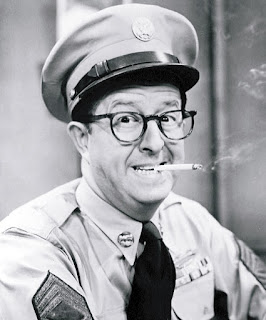