You may have noticed that The Grambler has been in hiding for a few weeks. Was I perhaps unwell? Yes and no. Yes, you may indeed have noticed that there has been no edition of the world’s greatest ill-informed blog and no, I haven’t been unwell.


Part of the break from blogging was due to Mrs G and I taking a well earned break... as in holiday.  A couple of weeks were spent in the stunning area known as the Amalfi coast or the Neapolitan Riviera. Very nice. Not suitable for someone like me though. Wobbly legs and rugged coastlines do not mix well.


However, we made the best of it and managed to take a couple of trips which didn't involve walking... or cliff climbing which would be a better way to describe it... it really is rugged terrain.


We took a train journey and, from the relative tranquility of being seated in a rather crowded carriage, managed to see some wonderful scenery. The views were magnificent and we even passed mount Vesuvius and the isle of Capri.


But you don't want a travelogue. That's not what the world's greatest ill-informed blog is about. Surely there is something interesting to report, I hear you say.


Indeed there is. When we got on the train, a smartly dressed young man stood up to give this oldie a seat. Incidentally, his chivalry was an exception. It seems that young people in Italy are not taught to respect old fogies. Other than this young man, not one young person gave up his or her seat for anyone who was elderly or infirm. Shocking manners, I say.


Anyway, the train trundled along passing by, and through, some of the aforementioned spectacular scenery before stopping at a station where it seemed to remain for longer than the norm.


What was the reason, everybody seemed to be asking. After a while, we spotted an employee of the railway company marching purposefully down the carriage towards us. He walked directly to Mr Chivalrous and challenged him. An argument ensued. As they were both Italian, the discussion was loud and accompanied by much gesticulating. It also seemed to be a very aggressive encounter; although, from general observations, I realised that any conversation between Italians seems to be an angry affair and I wondered how often they degenerated into actual fisticuffs taking place. We had no idea what was being said, but it seemed that the young man did not have a valid ticket and did not have any money to buy one. Despite this, he point blank refused to get off the train. After a few minutes others around us were joining in the conversation in similarly heated fashion. We watched on, enjoying this crazy scene playing out in front of us... I was reminded of an old Marx Brothers’ film, for some reason. Still, the young guy without the ticket refused to get off the train.


A girl sitting close to us explained what was happening. The young man was claiming that he would lose his job if he did not get in to work on time. My own thoughts on the matter were that by delaying a train for 20 or more minutes was not the best way to ensure that he remained in employment.


Meanwhile, others on the train were getting seriously peed off and simply got off the train to find other ways to their destinations.


Eventually, after holding the train up for so long, the man agreed to get off... with a bit of persuasion from two scary looking policemen who had been summoned to assist.


That was 20 minutes of time wasted over this pretty minor incident. Back here in the Yuk, the guy would have been told to get off... Well, the word off would be in there somewhere... with no option to argue his case. However, in Italy, people obviously behave differently, but I couldn't help wondering why such a minor incident was allowed to escalate so that it resulted in such a long delay. How much did it cost the Italian train company to hold the train up for so long and cause other trains to be delayed or even cancelled? And what about those individuals who had decided to leave the train because one guy was being bloody-minded about getting off? How much did they have to pay out on bus or taxi fares?


Have a guess how much his unpaid fare should have been... €2.90. All that fuss over less than three quids!


As the train began moving again an ironic cheer went up throughout the carriage and our translator friend said to us, 'That is likely to be the most Neapolitan experience you will get on your entire vacation.'


I have to agree. It was a surreal moment, certainly, but highly entertaining nonetheless. 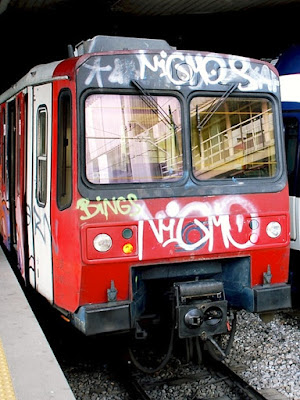 This is what you get if a train
waits at a station for 20 minutes.


Let’s move on to the birthday honours, shall we? As we have missed a few weeks, I have decided, other than for this week, to include only those people who can provide us with a musical link. So, let’s begin with September the 28th...


Maria von Trapp 1914 (Singer. One of the famous family. Here is one of the von Trapp family’s toons, Es Wollt Ein Jagerlein Jagen. Don’t blink or you’ll miss it.), ‘Country’ Johnny Mathis 1930 (Curntry en wyustern sanger. Here’s Black Sheep. Meh!), Emmett Chapman 1936 (Geetarist and inventor of the stick that bears his name. Here’s Nick Beggs playing Tava on this versatile instrument.), Ben E. King 1938 (Singer that we should stand by. Cue cheesy video.), Jim Diamond 1951 (Singer who won't let you down.), Andy Ward 1952 (Drummy bit of Camel. Here’s a track with him battering away like a good un.), Jennifer Rush 1960 (Singer. We could only have one song... Here’s Huey Lewis and the News with The Power of Love... Hang on a mo.) and Melody Thornton 1984 (A Pussycat Doll. Here’s Stickwitu.).


Right, here’s the same thing for October the 5th...


October the 12th anyone?


What about October the 19th?


Finally, let’s get bang up to date. Were any famous or notorious people born on October 26th? Of course... Here are some I’ve even heard of.


I am writing to you from up here in Ross and Cromarty, but please don’t confuse me with my cousin of the same name who lives in nearby Portmahomack. Anyway, back in the 1970s I really enjoyed Northern Soul, so I was pleased that you included a track by Gloria Jones who provided a lot of music I danced to back in the day. Her most famous song was later recorded by Soft Cell; can you remember what it was?

Let’s move on to grambling matters. There is little point in trying to remember how our last bet fared; it was so long ago, I have completely forgotten. So, what has the great and powerful Grambler randomly chosen for us this week?


Middlesbrough vs Fulham - Prediction Away win - 6/5


Southend vs Ipswich - Prediction Away win - 3/5


Ooer... Far too whopping for my liking.


Born in Romford in 1978, this player began his career with West Ham United before a switch to Stamford Bridge brought 147 goals in 429 games. Won the Champions League in 2012.


Did you get Frank Lampard? Then you were right.


One for this week? Before moving to the Emirates Stadium, Arsenal played at Highbury. Your question this week is what other team in the English league plays at a stadium called Highbury? Too easy? Maybe...

And finally Cyril? And finally, Esther, we end with a short film of a young girl’s first appearance on nationwide television. I am not a fan of talent shows such as ‘Insert nation of choice’s Got Talent’, but they do occasionally throw up a really talented act... no, I’m not talking about Susan Boyle, I’m talking about Darcy Lynne, whose birthday just so happens to coincide with our birthday honours. She was born on October the 12th 2004. Who, I hear you ask. Darcy Lynne. She was a finalist in America’s Got Talent back in 2017 when she was just 12 years old. She is a rather talented ventriloquist as you will find out if you click on this link which I reckon you will enjoy.