You may recall that I recently advised via this august blog some pertinent alternatives to Twitter. Why stop there I ask myself. [Especially when you can rehash the same gag and present it as something different. Or am I just being the teensiest bit cynical. - Ed.] Ahem...


How many of you out there in Gramblerland refer to trip adviser before embarking on a holiday? I know I do. However, I don't think it goes far enough.
What if you are planning a cruise? It's all very well people saying that they have enjoyed a holiday with a particular company, but have you ever wondered how to choose the best vessel to travel on? I know I have. The answer can be found on Ship Adviser.


All right, how many of you have been to a restaurant and, when paying the bill, have been at a loss to know how much of a gratuity to leave? I know I have. Well, help is at hand. You simply have to check at Tip Adviser.


Gentlemen who have decided that the family is big enough, [Whose wife has decided, surely. - Ed.] (don’t call me Shirley) have you ever wondered where to go to ensure that you are receiving the best vasectomy? I know I have. Wonder no more. Simply head for Snip Adviser. [I think I may have worked out the way this is developing. - Ed.]


Here's one for the older folk out there in Gramblerland. Have you ever been advised to have a major joint replaced and not known how to choose the best one available? I know I have. Luckily for you there is a site which explains the best joints available to you. Look no further than Hip Adviser.


And now one for trendies who want to wear the current fashion for torn jeans. Have you ever been unsure quite how many holes you should have in your jeans before people think you just look like a right old tramp? I know I have. Thank goodness for a site to advise on matters of such sartorial elegance... Rip Advisor.


What about those of you who go in for cosmetic surgery? Have you ever wondered how to check that you are getting the best available surgery? I know I have. The answer is simple. You should check on Nip Adviser. And don't forget its sister site which specialises in advice relating to facial surgery matters... Lip Adviser.


Have you ever been lost for a suitable retort when somebody makes a witty remark? I know I have. Be lost no more, all you have to do is visit Quip Adviser and hey bingo you will have the perfect riposte for those smart arsed witticisms.


Musos, have you ever tried to arrange a famous king crimson guitarist's work into order of best to worst? I know I have. Well, struggle no more because help is at hand. Just head for Fripp Adviser.


Have you ever wondered on the best way to shake someone's hand when you meet them? I know I have. Well worry no more. Head straight to Grip Adviser for the answer.


Dirty old men, have you ever wandered around the seedier parts of a city wondering which grotty little venue has the best 'live' show? I know I have. Well avoid the risk of being arrested for loitering with intent by simply heading for Strip Adviser.


Wimps, have you ever thought it would be a good idea to meet up with people even more geeky than you, just to make you look a tiny bit cool? I know I have. Well, help its at hand. Just visit Drip Adviser to find an even sadder get than you. Although, you might also end up with a plumber offering to fix your leaky tap.


Last one coming up. Honest...


Readers of the greatest ill-informed blog in the world, have you ever been spoilt for choice when presented with so many wonderful links to click on? I know I have. Thankfully for you, help is at hand. A quick check on Clip Adviser will help you decide what to do.

I feel a bit guilty after last week’s (g)ramble. Why, I hear you ask. Well, if you recall, I wrote about my childhood TV heroes all popping their clogs within a matter of weeks of each other. So, why the guilt, you may be saying. Or you may not. How do I know what you are thionking. Thionking? Or even thinking. The answer is that I made the flippant finishing remark about who was next to snuff it. And? And, this week Michael Bond, the creator of Paddington Bear and The Herbs... I’m a very friendly laahn (That’s how the narrator/singer pronounced the word lion.) called Parsley... kicked the bucket. Not a children’s television personality admittedly, but he did give us those characters which amused us nippers. Incidentally, Paddington wasn’t the first name choice. Oh no. But who would want to read about Euston Bear or St. Pancras Bear? [I am assuming that you made that up. You did, didn’t you? Tell me you did. - Ed.]


Were any famous or notorious people born on the 1st of July? Of course. Here are some I’ve even heard of. Louis Bleriot 1872 (A daring young man in a flying machine.), Tommy Dorsey 1899 (Bandleader. First clip of the week coming right up... Grab your coat and grab your hat...), William Wyler 1902 (Film director/producer. He did Big Country. [I say, that’s a bit uncalled for. - Ed.], Amy Johnson 1903 (She went up diddley up dup, she went down... no-one knows where... diddley own down. Aeronauts - that’s what they called pilots back then - were looked on as superstars back then. Remember Lindbergh having a dance named after him? Well, Amy got a song.), Estee Lauder 1906 (I love a lassie, a bonny bonny lassie, she’s as pure as the.... Hang on a mo; that was Harry wasn’t it? Estee made smelly stuff.), Olivia De Havilland 1906 (Ectress. Still with us at 101. Sticking with the flying theme; her paternal cousin was Geoffrey De Havilland, the aircraft manufacturer.), Farley Granger 1925 (Actor who invented the rusk.), Leslie Caron 1931 (Actrice et danseur.), Jamie Farr 1934 (Klinger in MASH.), Jean Marsh 1934 (Ectress who came up with Upstairs Downstairs idea.), David Prowse 1935 (Luke, Oi ahm your faaahther. Star Wars geeks will get that.), Delaney Bramlett 1939 (A friend of Eric Claptrap and George Harrison it would seem. See if you can spot the quiet Beatle in this clip.), Craig Brown 1940 (Footy bloke known for his manegerial career rather than his playing days. He was manager of... deep breath... Clyde, Scotland under 21s, Scotland, Preston North End, Motherwell... Yay... and Aberdeen.), Jeff Wayne 1943 (Musician. His most famous album was War of the Worlds. Best to watch when you have an hour or two to spare.), Debbie Harry 1945 (Blondie. All together now... Oh Denis ooh be doo...), Trevor Eve 1951 (Ectaw. Eddie Shoestring. That was him.), Dan Akroyd 1952 (A bluesbrother.), Carl Lewis 1961 (Runny, jumpy bloke. Used to advertise a soft drink in Japan called Pocari Sweat. I thought that the name on the can was misspelt... until I tasted it.), Diana, Princess of Wales 1961 (Who?), Pamela Anderson 1967 (Inflatable actress.), Melissa ‘Missy’ Elliott 1971 (Rapper. Want a clip? Tough; you’re not getting one. I have to draw the line somewhere.), Sufjan Stevens 1975 (Musician. A favourite of Stewart’s. Have another clip. Here’s a jolly toon... Come on. Feel the Illinoise.), Patrick Kluivert 1976 (Dutch footy bloke.), Ruud van Nistelrooy 1976 (Another Dutch footy bloke.) and Liv Tyler 1977 (Actress. Her mother claimed that Liv was the daughter of her partner Todd Rundgren and for eight years Todd went along with the deception. However, as the girl grew up, it became increasingly difficult to hide the fact that she looked a little bit too much like Aerosmith vocalist Steve Tyler. That mouth is a dead giveaway.),

Let’s move on to grambling matters. How did we do last week? Same as the week before, unfortunately. Two horses performed as they were meant to and their winning netted us a grand total of... 81 pees. Hmm, so we only lost £1.39. What happened?


As Peter Green so succinctly put it - Oh well. Onwards and upwards. What has the great and magnificent Grambler come up with this week?


Teaser time. Yay! Last week I asked you which football manager earned the nickname Tinkerman due to his fondness for changing his team’s starting line-up. The answer was everybody’s favourite footy coach, Claudio Ranieri. The sobriquet (That’s a good word. I must look it up.) was earned during his time at Chelsea when his coat was on a very shoogly peg. He probably thought, ‘sod it, I may as well have some fun.’


One for this week? Which two English Premiershit clubs were docked points in 1990 after 21 of the players on the field were involved in a brawl? As a bonus, who was the only player who didn’t get involved? One to ask them down the pub, I reckon.


And finally, Cyril? And finally Esther, I am indebted to a Mr. D. Prowse who famously played Daft Ada in Star Wars, but didn’t actually provide the voice. Here is his next most famous role and, once again, his lovely Bristol accented voice wasn’t used... Remember, always use the green cross code.  Although it was used in later ads... Is that Kenny Baker? 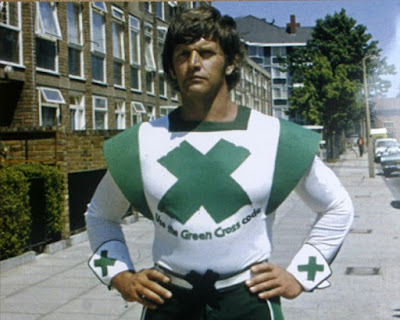