They are dropping like flies. What are, I hear you ask. Not what. Who. My childhood television heroes, that’s who. First there was Geoffrey Bayldon. Who? Catweazle. Remember him? The old Mediaeval wizard who was transported to the Britain of 1970 and had problems adjusting to modern things such as ‘electrickery’ [Wasn’t that an OMD song? - Ed.]. He looked about 90 when he made that programme; surely he didn’t live till he was 137. Okay, just checked his age. He was 93 when he died, so that made him... erm... 46 when he was in Catweazle. 46? Here’s a picture of him. 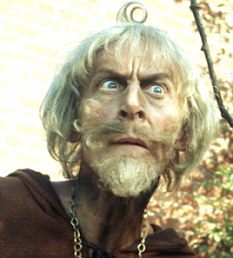 He’s an old-looking 46. That means he was the same age as Ewan MacGregor is now. Or seven years younger than Brad Pitt! Aye, we had it tough in the seventies..


Anyway, old Catweazle was barely cold when mechanical eyebrow man Roger Moore falls off his perch. No, I am not classing his James Bond as part of my growing up years. But his Ivanhoe was. Yes, old Roger’s first big starring role was in a kids’ programme about Sir Walter Scott’s gallant knight. The plots, I imagine, had nothing to do with Scott’s tale, but in those days accuracy would always make way for a bit of swash and buckle. Ivanhoe, I later found out was made by Lew Grade’s Associated Television company which also made inaccurate historical series such as Robin Hood (The riding through the glen one, not the everything I do, I do it for you one.), Lancelot, Richard the Lionheart, William Tell, Francis Drake etc. etc. See? Educational, this is, which is more than can be said for Mr Grade’s ideas about history.


Next up, John ‘Get down Shep’ Noakes, Blue Peter’s resident nutcase, popped his clogs. I say nutcase; he certainly came across as being a bit mental. Some of the ‘assignments’ he carried out in the name of entertaining kids were a bit scary. I mean, scary for us nippers who were watching him. He must have been absolutely sh*tting himself actually doing them. He once climbed up Nelson’s Column [Is that some sort of euphemism? - Ed.] to clean pigeon sh*t off his hat. That is one crazy stunt. Or how about racing down the Cresta bobsleigh run and falling off the bob and travelling the last part of the course at 80 miles per hour on his backside? As I said... nutjob.


Next to kick the bucket was the voice of Gromit’s master, Wallace, Peter Sallis. Okay, he wasn’t so much a chidhood hero. But he was often to be seen on television programmes that I watched as a nipper... probably in those Lew Grade swashbucklers. And last of the Summer Wine was already on the go when I was still quite young. Honest. Still a teenager, anyway.


Now, here’s a little clip from a television programme that will resonate with anyone who watched kids’ TV in the 1960s and 1970s and, thanks to the British Broadcorping Casteration’s policy of endless repeats, probably the 1980s too... Pugh, Pugh, etc.


Yes that was Captain Flack calling the Trumpton fire brigade to attention. Pugh, Pugh, Barney McGrew? Hang on a mo. Why does Barney get the full name treatment while the others get a curt surname only? What was so special about old beardy? Any road up, why am I even mentioning this? Because this week the man who provided the voices for Trumpton, Camberwick Green and Chigley, Brian Cant (I said Cant), also shuffled off this mortal coil... Must give us pause. There’s the respect. That makes calamity of so long life... Sorry, coming over a bit Shakespeare there.


I was a little too old for his Playschool and Play Away programmes, so never appreciated his skill as a pre-schoolchildren’s television performer, but I thought his narration of those three animated series was always spot on. Why, he even won a poll as the favourite children’s shows voiceover artist, beating the wonderful Oliver Postgate (Listen to me and I will tell you the story of Noggin the Nog...). David Jason was third, incidentally. Funny, I thought Bernard Cribbins would have been up there; he seemed to be the voiceover king back in the day.


Five gone in a little over a month. Makes you think. Who’s next, I ask myself.


I wonder how Bernard is keeping.

Were any famous or notorious people born on the 24th of June? Of course. Here are some I’ve even heard of. Field Marshall Horatio Herbert Kitchener, 1st Earl Kitchener, KG, KP, GCB, OM, GCSI, GCMG, GCIE, PC 1850 (Senior British army officer. During the second Boer war he set up concentration camps... You see, another British idea that others copied.), Roy Disney 1893 (Walt’s big bro.), Jack Dempsey 1895 (Boxy bloke. Aka The Manassa Mauler.), Phil Harris 1904 (Comedian, jazz musician, singer and actor. You might not know his face, but you will know his voice. He was a Disney favourite - Thomas O’Malley, Little John and this character, not perhaps quite how Rudyard Kipling envisaged him.), Juan Manuel Fangio 1911 (Racey car bloke.), Brian Johnston 1912 (Broadcaster.), Fred Hoyle 1915 (Astronomer.), Billy Casper 1931 (Friendly ghost who played golf.), Jeff Beck 1944 (The 14th greatest guitarist ever according to Rolling Stone magazine. Given that the top 100 missed most British guitarists altogether, it can hardly be called the definitive listing. Could there ever be such a thing? Doubt it. Also, it gives the top spot to Jimmy Hendrix. Sorry. No. Don’t agree. Where’s Steve Hackett? Ed Wynne? Steve Hillage? Hank Marvin? [Stop moaning and give us a clip. As long as it isn’t that Hi ho silver one. - Ed.] Okay, have some Led Boots), John ‘Charlie’ Whitney 1944 (Family’s guitarist. He wasn’t on that list either. Another clip?  Here's some Good News, Bad News.), Colin Blunstone 1945 (Vocalist with the Zombies. Have another clip. Here is the band some 50 years after the song was first recorded and the band name looking more accurate.), Betty Stove 1945 (Tennisy bloke. Bet you thought I would say something about cookers. Oh dear. I just have.), Clarissa Dickson Wright 1947 (A Fat Lady. I actually met her once. On Arran. She was selling jumpers. She was. It wasn’t a dream, I can assure you.), Mick Fleetwood 1947 (A drummer. Here’s another clip and it really couldn’t be anything else, could it... Here's Albert Ross. Whatever happened to Julie Felix?), Patrick Moraz 1948 (Keyboard wizard. Have another clip. Here’s the opening track from The Story of I, Impact. One of my all-time favourite albums of all-time, as Nicey might have said.), Andy McCluskey 1959 (An Orchestral Manoeuvre in the Dark. Time for another clip... Here’s a jolly wee toon and a video with some truly awful haircuts.), Iain Glen 1961 (Ectaw, dear leddie.), Curt Smith 1961 (A Tear for Fear. Another clip, vicar?  Nice haircut, Curt.), Glenn Medeiros 1970 (One hit wonder... in Britain, at least. And here it is...  That was really... erm...), Luis Garcia 1978 (Footy bloke.), Kevin Nolan 1982 (Another footy bloke.), Diego Alves 1985 (Yet another footy bloke.) and Lionel Messi 1987 (Not just another footy bloke.).

Let’s move on to grambling matters. How did we do last week? Well, we didn’t lose... not entirely. Two horses performed as they were meant to and their winning netted us a grand total of... 60 pees. Hmm, so we only lost £1.60. What happened?


After a shocking start, things improved. Unfortunately a little too late to net us much by

in the way of winnings. Never mind. What might this week bring?


Nope. Not in the least bit whopping.

Teaser time. Yay! Last week I asked you which nation has supplied the most Premier League players. That’s non-UK nation, of course. The answer is France with 194. And, in case you were interested, Ireland were second with 175 and the Netherlands were third with 120.


One for this week? Let’s have a nice easy one. Which football manager earned the nickname Tinkerman due to his fondness for changing his team’s starting line-up?


And finally, Cyril? And finally Esther, I am indebted to a Mr B. Johnston, a famous cricket cricketer who occasional said the wrong thing...


‘Ray Illingworth has just relieved himself at the pavilion end’.


‘Welcome to Worcester where you've just missed seeing Barry Richards hitting one of Basil D'Oliveira's balls clean out of the ground’.


‘The bowler's Holding, the batsman's Willey’.


John Snow hit Glen Howarth in the box (abdominal protector) with the fifth ball of an over causing some distress to the batsman and several minutes delay. When play resumed, Johnners said ' ... and Howarth takes his guard with one ball left'.


Johnston was renowned for his on-air schoolboy humour and puns. In one incident during a test match at the Oval in 1991, Jonathan Agnew (Aggers) suggested that when Ian Botham was out hitting the wicket while trying to hurdle the stumps, it was because he had failed to ‘get his leg over’ (a British slang term meaning to have sex). Johnston carried on commentating and giggling for 30 seconds before dissolving into helpless laughter. Oh let’s finish with that, shall we?