Week 18 - The Grambler on murder? Surely not.

Who remembers Taggart? The real Taggart, I mean. Mark McManus. Him. Do you recall his catchphrase? There’s been a murrrdah. Well, I was in a restaurant the other day and I witnessed murder. Notice that I said murder, not a murder. And I only heard it taking place, I didn’t see anything. That is because the murder being committed was to a song, or several songs that were being played for the ‘delight’ of us diners.


The perpetrator of these crimes against eardrums was the famous Frank Sinatra tribute act (who got lucky), Michael Bubbly. Admittedly, I am not a fan of his style of music, so I was already disliking what I was hearing before the real ‘crime’ took place.


A dirge began playing in the restaurant. It was supposed to be White Christmas; a fact I only realised because I recognised the words. The tune, such as it was, was entirely different. The tempo was even slower than the original. My only thought on listening to this ‘song’ was why. Why does somebody feel the need to take a well-known song and ruin it?


I blame that Eva Cassidy woman. I do. Her that murdered Somewhere Over The Rainbow.


Actually, now I come to think of it, song murdering was going on long before she started. Think of absolutely anything involving Louis Armstrong attempting to sing. Brilliant trumpeter. Rotten singer.


Another that comes to mind is John Lennon. Yes, I know he wrote a few decent songs, but he was no singer; what he did to Stand By Me was unforgivable.


Sometimes, the very opposite is true. Any Dylan song seems to be improved if someone else sings it and, although I know I am courting trouble, I would say the same of anything by Springsteen.


However, there are some perfectly acceptable songs that had nothing particularly wrong with them that were improved so much by covers that it was they, rather than the originals, that became accepted as the definitive versions. I am thinking of I Heard It Through the Grapevine, for example. Marvin Gaye’s take on it was so much better than the Gladys Knight original. Years later, a Marvin Gaye original got the same treatment. Paul Young’s arrangement of Wherever I Lay My Hat just seems perfect. And who would prefer Neil Diamond’s Red Red Wine over the UB40 cover version.


Some songs receive a different treatment and it is hard to judge. I’m a Believer... The Monkees or Robert Wyatt? Hmm.


You might argue that at least all the songs I have mentioned thus far have been given a different arrangement, surely that is preferable to a note for note copy. I agree. What was the point of all the versions of Spirit in the Sky or Unchained Melody other than to make oodles of money for those involved?


However, I am complaining about songs which take an often brilliant original and mess it up such that the result is just horrible. Return with me now to the restaurant where the crime which prompted this week’s rant was perpetrated. Old Bubbly hadn’t finished. I only mentioned one song: a shockingly bad version of White Christmas. There was worse, much worse, to come.


We all have our favourite songs. One of mine is a Beach Boys’ song which reached number two in the charts back in 1966 and was included on the LP sometimes cited as being the best album ever, Pet Sounds. It is a lovely song with a perfect arrangement and a lead vocal (provided by Carl Wilson) that is just wonderful. It is, of course, God Only Knows. So how did Bubbly manage to completely fmuck it up? Judge for yourselves. Compare and contrast.  Michael Bubbly vs Beach Boys.


Donny Osmond 60? Doesn’t seem right. I’ll bet he’s still singing Puppy Love and Young Love. Definitely not right. I think he was also part of that family group, The Osmonds. They had some big hits too. Crazy Horses. That was one. Then there was that one Let Me In. That doesn’t seem right either. I can’t remember their first hit, though. Can you help?


Yours with loads of love,

Let’s move onto grambling matters. How did last week’s bet fare. It actually won. I know. I can’t believe it either. I say won; four out of five results went our way. It still gave us a wee profit, though. £3.68 back from our £2.20 stake. Mustn’t grumble. What happened? Read on...


Brighton vs Liverpool - Prediction Away win


Emre Can powered a header beyond Mat Ryan from Philippe Coutinho's corner after half an hour and the Reds doubled their lead 79 seconds later... Mohamed Salah drove at the Brighton defence and picked out Coutinho, who slid a left-footed cross to the back post for Roberto Firmino to finish.


Brighton had chances to make it two, but Coutinho made it 4-1 by scoring with a cute low free-kick before enticing Brighton defender Lewis Dunk to head into his own net.


Gylfi Sigurdsson had a poor game overall, but finished neatly less than two minutes into the second half after Dominic Calvert-Lewin's lovely angled back-flick played him in.


England youth forward Calvert-Lewin, Everton's outstanding player, added a deserved goal when he ran on to Wayne Rooney's pass and scored via a deflection off Mathias Jorgensen.


An early goal from Demarai Gray was enough to give Leicester victory. Gray got on the end of a Riyad Mahrez cross for the goal and hit the post with another effort in the second half.


Burnley's Robbie Brady was taken off on a stretcher before the break following a nasty clash with Harry Maguire in the box.


Chris Wood almost pounced on a mistake from Kasper Schmeichel in one of several half-chances for Burnley.


Wilfried Bony's first top-flight goal for more than a year gave the visitors an early lead, but Xherdan Shaqiri and Mame Biram Diouf had the home side in front by the interval.

Watford vs Tottenham - Prediction Away win

The hosts had taken the lead in the 13th minute when Christian Kabasele headed in from six yards from Tom Cleverley's left-wing corner.


Watford thought they should have had a penalty when Richarlison appeared to be fouled, but it was not given, and less than a minute later Tottenham's Son Heung-min finished off Christian Eriksen's cross to equalise.


Spurs played most of the second half with 10 men after defender Davinson Sanchez was dismissed for elbowing Richarlison in the 52nd minute.

Ooooh! So close to a full house there. Can The Grambler go one better this week? [Don’t talk so daft. - Ed.] Let’s see what random predictions he/she/it has come up with this week.


Fulham vs Birmingham - Prediction Home away - 8/13


Middlesbrough vs Ipswich - Prediction Home away - 4/6


Oh dear. The Grambler seems to be stuck in single division mode again. All five predictions are from the English Championship. Well, it almost worked last week... Here’s hoping. Let’s see how much we could win in the unlikely event that the results go as predicted.

We could call that a bit whopping.

Teaser time. Yay! Last week I asked you what was the link between Motherwell and Dundee United in 1991 when the ’Well won the cup. Both club were managed by a McLean. Not just any McLean, but brothers Tommy and Jim. Younger sibling Tommy was victorious on the day.


One for this week? This week Liverpool beat Spartak Moskva 7-0 in a Champions League game. It was the second time they had won by such a margin in that league in a single ‘campaign’. They join Marseille and Shaktar Donetsk in the record books; all three have won two games 7-0 in the competition in one year. However, the score is one short of Liverpool’s own best; they beat Besiktas 8-0 in 2007. This week’s teaser? Which other team matched that score? Try that one down the pub, before resorting to Googlie.

And finally, Cyril? And finally Esther, I am indebted to birthday celebrant Mr. J. Malkovich... although he hasn’t actually got much to do with this week’s finishing item. As you know, I enjoy B3ta.com; especially the image challenge. This one caught my eye and struck me as being rather apt... 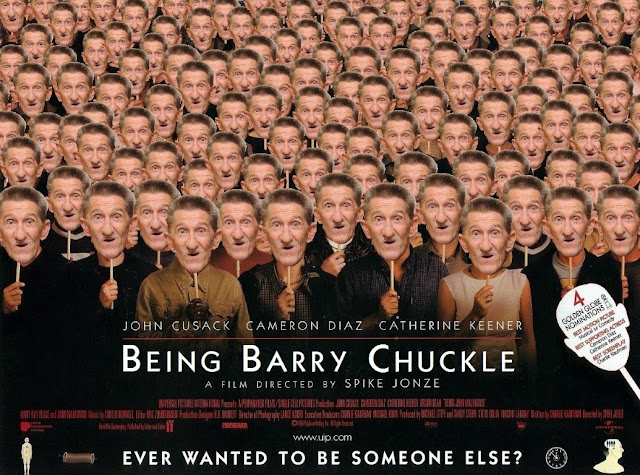 Sorry to our readers overseas, who might not have heard of the wonderful Chuckle Brothers.
That’s all for this week folks, but remember you can read the musings of The Grambler every week by going to the blog at www.thegrambler.com