Week 25 - The Grambler on the day the music died

How about a song?

Reg Dwight aka Sir Elton of John has given us some cracking songs over the years. Here’s his very first hit, Your Song...

‘Yes, well just drop your trousers, Mr John and we’ll have a look. Yes, you’re right, it is rather unusual... Are those teeth marks?’

Fancy him having teeth marks on his knee...

That was quite an apt start, because this week’s (g)ramble concerns Britain’s health service.


What has the Beeb Beeb Ceeb got against the National Health Service? I ask because, for about a fortnight, every news broadcast began with another story about the (alleged) appalling state of the NHS.


First up was the fact that waiting times in Accident and Emergency Units were not being met. Another night, we were told that nurses were leaving the NHS in their droves because it was such a dreadful place to work. Then we had an item about people having to be left waiting in ambulances and on hospital trolleys because beds weren’t available. And so it went on night after night.


My question is - why? Why was it considered newsworthy to take a pop at the health system? Not just one pop, but several. Every aspect of the NHS seemed to be getting flak from the Beeb. To me, none of it was even news. The NHS is the largest employer in Britain; a huge organisation. It deals with masses of people on a daily basis. I don’t recall anything being said about the thousands of people who are perfectly satisfied with the way it works, so why should the business be subjected to all this negative reporting?


The Beeb Beeb Ceeb is often accused of left-wing bias; I believe that this constant knocking of the NHS is quite the opposite. It is very much biased towards right-wing conservatism. It has long been suggested by the Tories that the NHS needs a major overhaul. For major overhaul, read complete shutdown. They would like to see the US healthcare system being put in place. Basically, you get healthcare if you can afford to pay it yourself. The Beeb is surely providing ammunition for those that want to put an end to the NHS.


Actually, I wonder if, because the BBC had gone to all the trouble of setting up camera and sound crews in a hospital, they just made sure they got plenty of footage for a fortnight’s worth of news broadcasts... Or am I just being cynical? [You? As if! - Ed.]


There was even a slightly positive news item on a particular hospital. I say slightly, it was still pointing out how overworked nursing staff were in the hospital. This particular bulletin featured a hospital where clerical staff were helping nursing staff by doing some of their more menial duties. Isn’t that nice? But what does it tell us? Basically, the NHS has too many non-nursing staff members whose time could be utilised better than it is. Huzzah for common sense, says I.


Whenever I have to visit my local hospital, I have to go to two or three different reception areas before I get to the department I require. At each station, there are several receptionists; there never seem to be any queues. Some would suggest this proves the efficiency of the staff; to me it simply means overmanning. More often than not, the receptionist is sitting idle waiting for the next customer/patient.


So, well done to whoever realised that those staff could be better used elsewhere, when necessary.


Moving on, and changing the subject not quite entirely, Mrs G was watching a programme on TV recently [Really? How interesting. Yawn. - Ed.] about people who felt that they were were the wrong gender and wanted sex-change operations. I, being incredibly squeamish, decided not to watch the programme as it was showing a lot of actual surgery taking place. I could still hear some of the dialogue, though...


‘...Linda is pleased with her breast implants... The next stage of her transformation from being a man to being a woman is gender re-alignment [I think I understand what that means... The unkindest cut of all. - Ed.] and that will be done through the NHS.’


WHAT??? The NHS is supposed to be treating people who are ill! This person is definitely not ill... well, not physically, anyway. The NHS should not be allowing such operations to be taking place under its banner. If they are being carried out, the individuals undergoing this unnecessary surgery should be made to pay! The full fn cost and all!


And don’t even get me started on gastric bands.


Thanks for playing a track from Dave Davies of the Kinks. We have been great fans since their first number one record back in 1964. It’s hard to believe that Davies was only 16 years of age when he first gave us that terrific guitar riff on that first song. Here’s a teaser for you, what was that first hit called?

Let’s move onto grambling matters. How did last week’s bet go? Well, since last week’s edition was printed incredibly late, the answer was given for you: £2.11 return from our £2.20 bet. A loss of nine pees. What happened? Read on...

Barnsley vs Fulham - Prediction Away win


The Tykes led when Liam Lindsay turned in from a corner, but Fulham dominated after Dimitri Cavare's second booking for a push on Stefan Johansen.


Ryan Sessegnon fired in the rebound after Ryan Fredericks' shot came back off the post early in the second half.


Kevin McDonald stabbed in from close range to put Fulham ahead, before Sessegnon's second goal sealed the win.


Brentford had not lost at Griffin Park in the Championship since the opening day of the season, but Maddison's 30-yard effort put Norwich ahead early on.


Nelson Oliveira and Grant Hanley went close to making it 2-0 while Florian Jozefzoon (Definitely the winner of ‘Cracking name of the week’.), Yoann Barbet and Alan Judge all had efforts for the hosts.


City had Nathan Baker sent off for a late tackle on Josh Scowen after half an hour.


Diedhiou set up the second as his saved shot was turned in by Joe Bryan.

Ipswich vs Wolves - Prediction Away win


Jota had two more efforts saved by Ipswich goalkeeper Bartosz Bialkowski, while Martyn Waghorn shot into the side-netting for the hosts.


The visitors showed their intent in the opening moments when Abu ‘Einstein’ Ogogo headed just wide in the third minute.


And Shrewsbury took the lead in the 21st minute when Shaun Whalley's corner made its way through the Portsmouth area before being poked in at the back post by James Bolton.


Oliver Hawkins then had Pompey's best chance after he was picked out in the box by Gareth Evans, but he could not guide his header past Craig MacGillivray.


And the home side were left furious seconds later as referee David Coote waved their appeal for a penalty away when Whalley appeared to handle the ball in his own area.


Pompey went close throughout the second-half, with Brett Pitman firing the final chance wide in stoppage time after Adam May was dismissed for a second yellow.

Ho hum. Only three out of five correct and the other two not even close. Can The Grambler improve this week? [Nope. - Ed.] Let’s see what he/she/it has randomly chosen.


Let’s see how much we could win in the unlikely event that the results go as predicted.

Too whopping for my liking.

Teaser time. Yay! Last week I asked you who was the only player, other than the sainted Lionel of Messi, to have scored five goals in a Champions League match. The answer was Luiz Adriano who was in the Shakhtar Donetsk side which beat BATE Borisov by seven goals to nil in 2014.

And finally, Cyril? And finally Esther, I am indebted to a Mr D. McLean who provides us with a rather poignant end to this week’s proceedings. You see, the 3rd of February 1959 is the date that old Don McLean referred to as ‘the day the music died’. That was when Buddy Holly, the Big Bopper and Richie Valens perished in an air crash. I thought it apt, then, to finish this week with American Pie..


It is a song whose lyrics have bamboozled listeners for years. There have been web forums discussing their meaning since the invention of web forums. So what does the song American Pie mean? Perhaps the best person to ask is the writer, himself. Here’s Don...


‘When people ask me what American Pie means, I tell them it means I don’t ever have to work again if I don’t want to.’


I do like it when someone I thought was humourless proves to be the exact opposite. Here’s the song. 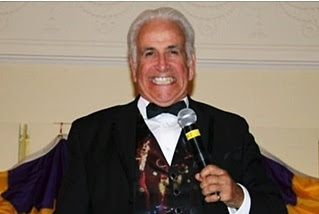 Don McLean
[You barmy pillock! That's the Brummie comic that
used to be on Crackerjack! - Ed.]
Oh yes...CRACKERJACK!