Have you been watching the Beeb's latest psychological drama, Killing Eve?  Killing Eve? Killing our brain cells more like.  What a load of old tosh.


It didn't look too promising from the start.  Sumptuous filming aside, it appeared to be a vehicle for an American audience made by a British company.  It was obviously written by an American as some of the very American expressions used by the actors, many of whom were British, just didn't ring true from English lips.


However, I thought I would give it a fair airing. Maybe it would improve and I could forgive it such failings.
Basically, it it is about our heroine, Eve (who, incidentally, has the kind of face on her that looks like she is constantly sucking a lemon), chasing a baddy, whose name I never quite worked out, she changed persona so often, who was a crazy assassin.


The first episode gave us a body count of five, as the nutjob killer got into her stride.


After episode three, I had lost count of the number of individuals who had been bumped off.  Twentyish? This really was mental stuff.  It seemed that anyone who looked at this murdering loony the wrong way was immediately despatched.


Now, I reckon this so-called drama was based on a computer shoot ‘em up game where baddies pop up and you have to kill them before they kill you such was the speed at which people were done away with.  It became more about slaughtering than individual kills.  If there had been a 'hits' counter at the bottom of the screen it wouldn't have seemed out of place.


It wasn't just the number of killings which proved excessive.  The detail that we were subjected to was unnecessarily graphic.  The very first killing showed us in rather too much detail our mental murderess injecting some lethal liquid into the eye of her target. Gruesome doesn't cover it.


Her tactics covered all manner of ways to kill.  Guns, knives and a four-by-four people carrier were all utilised as weapons.  So were teeth.  I swear she bit someone's throat out at one point.


Now, if this programme was only about her killing people, it would have been pretty dull fayre. To make things more interesting... for more interesting read more ludicrous... there was the added plot twist that goodies were actually baddies and nobody knew who was working for who.


It was utter bollocks from start to finish.  Who the hell okays this load of old turnips for transmission?  Probably the same person who thought Deal or No Deal was a sensible idea.


As for the ending... dearie me. That just beggars belief. If you haven't watched the whole series yet, I won't tell you how it ends; I don't want to spoil it for you. [It sounds as if whoever was involved in the programme has already done that. - Ed.]


The worrying thing is, there's going to be another series. I think I'll not bother with that, thank you very much.


I take great exception to you telling us that Ashanti’s Only U was her biggest UK hit. As a solo artist, perhaps it was, but she had a number one when she was featured on a tune by Ja Rule. I believe R. Kelly was also featured, but I can’t remember the title of the song. Perhaps you can help.


Yours with knobs on,


Lukas Jutkiewicz scored a hat-trick as Birmingham City proved too much for Rotherham.


The Blues striker scored twice from close range in the space of three first-half minutes to give the hosts a deserved 2-0 half-time lead.


He drilled the ball through a crowd of players to complete his first senior career treble after the break.


Both sides had chances in an open first-half but it was the visitors who made the breakthrough after the interval when Joe Lolley took a pass from a driving Daryl Murphy and smashed a shot into the top corner.


Lolley had a further chance to add to the lead but was denied by Boro (and former Motherwell) keeper Darren Randolph, while cracking name of the week award winner Britt Assombalonga was kept out at the other end by Costel Pantilimon's save.


Lewis Grabban made sure of the points when he turned in Lolley's cross at the near-post and not even the late dismissal of Jack Robinson, for a second yellow card for simulation, could stop Forest claiming the points.


David McGoldrick scored his fifth goal of the season from the penalty spot after defender Jack O'Connell was pulled down in the area midway through the second half.


Chances were limited in a cagey match at Bramall Lane, but the visitors twice went close after the break with Nouha Dicko and Markus Henriksen forcing good saves from Dean Henderson.


But the Blades saw the game out to seal the victory.


Swansea had made the perfect start when Connor Roberts' cross was deflected in on eight minutes by Janoi Donacien.


Bersant Celina looked to have rescued a point for Swansea after a superb team move, only for Trevoh Chalobah to head home.


West Bromwich Albion came from behind to eventually ease to victory against Reading.


The Royals took an early lead through Leandro Bacuna's clinical finish from a corner, before the hosts' Harvey Barnes struck the post.


But the Baggies took full control in the second half, as striker Dwight Gayle produced two well-guided finishes in quick succession to turn the game on its head.


Barnes' fine long-range effort made it 3-1 before defender Kyle Bartley netted Albion's fourth from a corner.

Oh dear. Come on Grambler, pull your socks/tights/megabytes up and give us some winners. Please. Pretty please.


What has he/she/it come up with this week?

A bit more whopping than usual. Will it win? Will it fu... Doubt it.

Teaser time. Yay! Last week I asked you who is the only player to have scored in a Champions League final, FA Cup final, UEFA Cup final and League Cup final. It was, of course, Rangers’ current manager Steven Gerrard. Incidentally, Liverpool (his only club) won on each of those occasions.


One for this week? In the inaugural season of the English Premiershit, which three Yorkshire teams featured? Hmm... One to try down t’pub.

And finally, Cyril? And finally, Esther, I am indebted to a Mr. B. Anksy for this week’s finishing item. Why Banksy, I hear you ask. Well, this week a Banksy original (the one of the little girl holding a heart-shaped red balloon) was sold at auction. As the hammer went down at something like £1 million, the picture spontaneously ‘shredded’. It all smacks of being a typical Banksy stunt, so the jury is out as to whether it was all a big setup.


As any of you out in gramblerland know, Banksy is my favourite artist; I find his work both clever and funny. I also like the way he takes any opportunity to have a go at the normal pomposity of ‘artists’... Yes it’s very clever, but it’s only a fn painting.


So, let’s finish with another of his ‘works’, a short film which initially appears to support rebel terror groups, but please watch it through to the end... 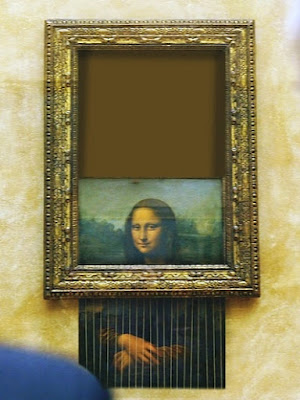 Banksy strikes again
(Thanks to b3ta.com)