Week 17 - Grambling with the elf

WARNING: IF YOU ARE A BIT PRECIOUS ABOUT RELIGION AND STUFF, I WOULD SUGGEST YOU LOOK AWAY NOW.


'Phew, Mary, that was some trek. I wish they'd get that Bethlehem bypass finished. And it's murder at this time of year with everyone heading home for solstice.'


'God, I think me waters are breaking.'


'Will you stop mentioning God. It's God this and God that. What about me? Don't I get a look in?'


'God, stop mithering will you.'


'Hmph! It's giving me a right complex.'


'God, we're gonna need to find somewhere to kip for the night.'


'May we have a room for the night, as you can see my wife is heavy with child.'


'God, just hurry up will yer'


'Time of year mate. We can fill ’em all at this time of year. Supply and demand.'


'Blow that for a game of soldiers! Come on lass, we're off... wait till the new bypass comes, you crook. You won't be ripping people off so quickly then!'


'An old barn? I've got to have me sprog in an old barn? God, I tell you what, when this baby comes, your name’s not going on the birth certificate...'


The rest, as they say, is history.

Were any famous or notorious people born on the 15th of December? Of course, here are some I’ve even heard of. Nero 37AD (The well-known emperor. Looked a bit like Peter Ustinov, or Christopher Biggins.), Gustave Eiffel 1832 (The well-known engineer. Go on, have a guess what he designed.), Charles Duryea 1861 (Who? He was the engineer and businessman who made and sold the first American-produced motor cars. Educational, this is.), J. Paul Getty 1892 (Rich bloke. Looked nothing like Donald Sutherland.), Harold Abrahams 1899 (Runny bloke. Looked nothing like Ben Cross.), Oscar Niemeyer 1907 (Architect. I once stayed in a building he designed... Blibbing monstrosity.), Stan Kenton 1911 (Jehhhzzz musician. Have a clip. This is his signature toon, Artistry in Rhythm.  Hmm...), Jeff Chandler 1918 (Actor. Looked nothing like Cochise. He died aged just 42 when a medical procedure went disastrously wrong.), Max Yasgur 1919 (Farmer.), Alan Freed 1921 (DJ who famously promoted rock and roll. Unfortunately, he also took a few bribes to ‘promote’ some musicians in what became known as the Payola scandal. Not surpringly, his career was effectively finished when the details of his means of raking in extra income became known.), Edna O’Brien 1930 (Orfer.), Cindy Birdsong 1939 (Singer. Replaced Florence Ballard in the Supremes. Let’s have a clip. Here’s Nathan Jones.), Dave Clark (pictured) 1942 (Drummy bloke with his five. A clip? Here’s their biggest ’it, Glad All Over.), 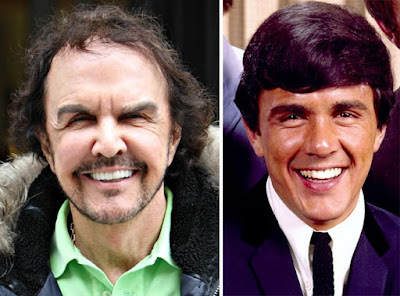 Yes, the Klingon on the left really is the older
version of the bloke on the right.
See also Week 33 - Grambling Old Gracefully
Carmine Appice 1946 (Another drummy bloke. Here he is with mates Jeff Beck and Tim Bogert with Black Cat Moan.), Don Johnson 1949 (Actor who got to drive fast cars and boats in Miami Vice. Er... that’s it. Oh, hang on, the gullible public shelled out good money for this.), Joe Jordan 1951 (Footy bloke.), Paul Simonon 1955 (A bit of the Clash. Have a clip. Here’s London Calling.  He’s the cat in the hat.), Paul Kaye 1964 (Comedian, it says here.), Frankie Dettori 1970 (Horse racey bloke.), Michelle Dockery 1981 (Ectress. Lady Mary in Downton Abbey. Er... that’s it.) and Jesse Lingard 1992 (Footy bloke.).


Thank you for a link to one of my favourite bands, The Clash. An excellent choice too; London Calling was probably their biggest hit, if you disregard the re-release of Should I Stay or Should I Go which got to number one after being used on a commercial. Any road up, here is a teaser for you. What was their very first single release? That has got you foxed, I’ll bet.

Let’s move onto grambling matters. What happened last week? Well, those who take the time to actually read The Grambler’s predictions were probably a bit confused. I certainly was. How the fu... How could Leeds be playing two games at three o’clock on the same day? Obviously they weren’t. Yours truly had fed The Grambler the wrong information. He/she/it had the 3pm games from last week (the 8th) and this week (the 15th) to select from. That is the reason that Leeds came up twice.


All this means that it is not really worth doing a gramble this week as last week’s predictions are still valid. That is also why I have not published this edition earlier. Fortunately, it allows me to check the results of the bets to see how we got on... Bear with me a few seconds while I check. Just talk amongst yourselves...


Right. Found it. We have, over the past two Saturdays, won... fanfare please... Hang on, cancel that fanfare...


We’ll give The Grambler a wipe down with an oily rag and he/she/it will be back next week as good/bad as ever.

Teaser time. Yay! Last week I asked you who was the first black player to win a full England cap. I also gave you a secondary question and asked you what year it happened. The answers are Nottingham Forest defender Viv Anderson in 1978.


One for this week? How about this? The Second Division match between QPR and Luton Town played at Loftus Road on 1st September 1981 was a first in League history. The first what? Hmm... interesting.


And finally Cyril? And finally, Esther, an odd ode...


The goose is getting fat,


Please put some money into https://www.justgiving.com/fundraising/geraldine-smith3,


Two pounds is the minimum amount you can donate, a pound won’t do,


But you can put lots more in if you really want to.

Yeah, I know; it doesn’t exactly scan too well but, as it is Christmas/gramblemas, let’s all give a bit to the fund. Go on. You know you want to.


Christmas/gramblemas is all about tradition isn’t it. We celebrate the birth of Jesus every year. We open advent calendars. We wait for a big fat bearded bloke to come down our chimneys. We love giving and getting presents. We go to pantomimes. We eat sprouts.


I like the new ‘tradition’ that has begun recently. How can a tradition be new, I hear you ask. Well, I believe this one will still be around when I have popped my clogs. It is the ‘naughty elf on the shelf’. Sorry pardon excuse me? In the weeks leading up to Christmas/gramblemas the naughty elf makes regular appearances and does mischievous things through the night, but tends to be found in some compromising situation by the children of the household each morning.


The things little elfie get up to can be very naughty indeed. Dressing up in Barbie’s dress? Yep. Wrapping the Christmas/gramblemas tree in toilet paper? Of course. Doing a snow angel in icing sugar? Uh huh. Snorting icing sugar? Er... perhaps not.


Any road up, the naughty elf on the shelf gets my vote as being a worthwhile addition to the list of traditions.


Here at grambler towers, we also have our own little Christmas/gramblemas tradition. [Do we? - Ed.] We do. There is a certain song which gets included as a clip at this time of year.  [Is there? - Ed.]  Yes.  It was Stewart’s favourite Christmas song and so, ladeez and genullum, let’s end with Shakin Stevens and Merry Christmas Everyone.