What did you used to dress up as at Halloween when you were a nipper?


That's an odd start to this week's edition of the world's greatest ill-informed blog, you must be thinking. I say must... maybe you're not thinking that at all. How would I know? I'm just saying you might be thinking that. Mmm... aye.
Anyway, you might also be thinking that I'm a bit early. It's March, for goodness' sake. Halloween isn't until the end of October.


There is a reason for asking. If you were like me, you probably went out guising... that's what kids do in Scotland... none of this trick or treating lark... dressed in something homemade. Cowboys were a popular choice of outfit when I were a lad. [Uh oh, Hovis time. - Ed.] All it needed was a toy gun and a cowboy hat. Nurses' outfits were a popular choice for girls.


I do remember the first time I went out guising at Halloween. I was four and the family had just moved to polo mint city from Derby. Down there, nobody really did Halloween, but up here in Scotland it was a big event in a child's calendar. So it was all a new experience to my big brother and me. My mother, who was a pretty accomplished seamstress, really seemed to relish the chance to make some interesting outfits. My own was quite simple to achieve, although by today's standards a wee bitty racist. I was what used to be known as an ‘onion Johnny’ (which had nothing to do with flavoured condoms). An onion Johnny was a French onion seller who got on his bike and crossed the channel to flog his wares. Basically, my outfit consisted of a pair of jeans, a stripy shirt and a beret. Okay, so mum didn't spend a great deal of time over my outfit... I think she painted a French looking moustache on my mush and threw a string of onions around my neck. Et voila! Le Johnny d'oignon.


She did, however, pull out all the stops for my nine year old brother’s outfit. If my outfit was a bit racist, his was incredibly racist. He was dressed as a ‘Coolie’, an offensive term even then for a labourer from China. Seamstress mum took a length of material and dyed it black before using it to make what, to me, looked like a pair of pyjamas. However, my mother was convinced that this was traditional attire as worn by inhabitants of China. She also made a coolie hat out of black cardboard in a flattish cone shape. To this was sewn a black pleated pigtail. My brother’s eyes received some eyeliner to give a look that Prince Philip might have called slitty-eyed and a droopy moustache was painted on to finish off the ensemble.


Having dressed up, we were made to knock on neighbours’ doors and perform a ‘party piece’ for them. A song was always popular, as was a little poem or joke. I can’t remember what I did, but almost 60 years on, I can remember my brother’s offering. It was a joke which my father made up and thought amusing, but I am certain that my brother hadn’t got a clue what it meant. Are you ready for this? My brother announced himself thus: ‘My name is Ray Ling, a Chinese fence.’ That was it. Not funny then; not funny now.


Where is all this rambling leading? As years passed, people made less and less effort with halloween costumes. Black bin bags became very useful instead of actual sewn outfits. A few suitably shaped bits of paper glued onto a bin bag could create anything from a skeleton to a superhero. So much easier.


Easier still is the current trend of simply buying a ready-made costume. Want to be a Disney character? No problem. There are loads out there in fancy dress shops. Superhero? Yep. A profession that wears a uniform? Check.


Yes, any outfit you could ever want is available for no effort whatsoever. Gone are the days when a mum or dad spent time being creative and making a costume that was unique for each child. At the last school halloween disco (Yeah, I know... Who came up with that one?) my grandchildren attended, most of the boys were dressed as the superhero from whatever was the popular superhero film of the day and most of the girls were dressed as the princess from the then current popular Disney film. It was as if they had changed out of their school uniforms to simply don another. A little bit sad, don’t you think?


That still doesn’t explain why I am mentioning halloween some seven months before it is due to happen. There is another ‘dressing up day’ kid on the block: World Book Day is held in March. The first was held back in the late nineteen nineties, but it is only in recent years that it has taken off, so to speak. School teachers encourage children to dress up as a favourite character in a book. Nice idea, you would agree. Do I have a problem with that? Initially, no. The first couple of times it was held, I thought it marvellous. Mums and dads were again using their ingenuity to create an interesting costume for their children to wear.


This year, however, oh dear. The shops were full of costumes... Harry Potter, Willy Wonka, Dennis the Menace, Alice in Wonderland, Little Red Riding Hood, the Gruffalo and countless others are available to purchase ready-made so that you can dress your child to be just like everyone else... and, hey, no effort, indeed, no thinking, is required.


How sad that businesses have once again hijacked something that we all used to have... imagination.


Let’s move on to the birthday honours, shall we? And, as there was no edition of the world’s greatest ill-informed blog last week, you are treated to two weeks of birthday honours. 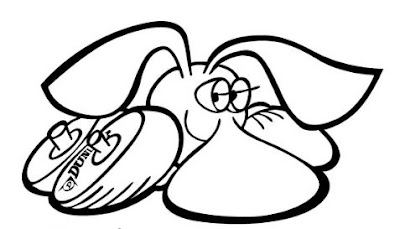 I’ve received a letter...
Dear Mr Slumpspelare,
I am writing on behalf of my son, who wonders why you gave a Gorillaz song as your Damon Albarn link. Surely, [Don’t call me Shirley. - Ed.] he was involved with Blur for much longer, so really you should have given us a song by them. The title song from their first number one album would have made a good choice. Can you remember it?
Yours with oodles of love,
Pa Clife.

24 pees less whopping than a fortnight ago.

Teaser time. Yay! Last week... sorry two weeks ago... I asked you which Englishman has managed Charlton Athletic, Crystal Palace and Hull City in the Premier League. The answer is former Northern Ireland international, Ian Dowie. Hang on a mo... Englishman? Northern Ireland international? How so, I hear you ask. He was born in Hatfield, but his dad was born in Belfast, so that, apparently, made him eligible to play for Northern Ireland. So now you know.
One for this week? Here’s a good one to keep you amused for a few minutes. Here are some anagrams of England managers’ names. See if you can work them out.
Craves Clement
Lay Frames
Oven Ride
A Huge Ghost Treat
Goody Horns
Clams Already
Enters Bravely
Capable Folio
One Wrongdoer
Hopefully, you’ll have a bit of fun working them out.

And finally Cyril? And finally, Esther, I am indebted to a Mr B. Cryer who provides us with this week’s finishing item. Here’s a little factoid about Mr Cryer. Did you know that he had a number one record back in 1957? 62 years ago for crying out loud! He recorded a novelty song made famous by the long-forgotten Sheb Wooley. [Wasn’t that a character in Emmerdale? - Ed.] Mr Wooley’s version of this particular song, for some reason, couldn’t be released in Finland. So Barry’s version got the nod. The rest, as they say, is history. Barry became a superstar in Finland thanks to this number one record. Actually, he didn’t. He never troubled the charts again. When you listen to the song, you’ll understand why he became a scriptwriter and comedian rather than a singer. Here is Barry Cryer with Purple People Eater.
That’s all for this week folks, but remember you can read the musings of The Grambler every week by going to the blog at www.thegrambler.com
Happy grambling.
Posted by The Grambler at 16:21