Did you miss The Grambler's rant last week? Who said no? Come on. Own up.


Anyway, there was a very good reason for there being no edition of your favourite blog last week. Last Friday was the sixth annual Kick Cancer's Backside Pub Quiz run in Stewart's memory by his friends.


Stewart, the founder of the world’s greatest ill-informed blog, had he lived, would have been 34 years old this week. It is, then, rather apt that his life was celebrated this very week.


It was rather a busy time for Mrs G and myself together with many others who were preparing everything to ensure that the evening went without a hitch.


This year we 'supersized' by holding the quiz in a venue that held 180 people instead of previous years' venues which held between 100 and 150. It shouldn't have presented any problems, after five quizzes, those involved knew the ropes, so to speak.


The venue was our local British Legion social club. That reminds me of a joke... Did you hear about the bloke who ran away from home to join the British Legion?


Hello Arthur. You don't believe you have what?


Heard about the charp who ran away to join the British Legion. What about him?


No no, it's a joke. He ran away from home to join the British Legion. Instead of the Foreign Legion. He was daft. That's the joke.


Well it doesn't sound very armusing to me. The poor fellow must harve been an trifle confusled.


No. It's only a joke. You know how people used to run away from home to join the French foreign legion... or the army or navy for that matter.


Ah, he was in the army. An ex sarvicemarn. Ooh well, he wasn't making an mistake. He was perfectly entitled.


To join the British Legion; a socianal club where ex sarvicemen carn meet up with old colleagues to chart about their time in the sarvices.


It may be an joke to you but it's very important to any old soldier... or sailor... or royal airforce... erm... whatever it is they're called... to meet with old friends.


I think I should move on quickly.


Yes the venue was the local British Legion... shut up Arthur... which was new to us.


One area where we always seemed to have problems was with the sound systems in previous venues. I don't have the strongest of voices as quizmaster so a good sound system is a must.


No problem, we were assured, this place has got a terrific sound system.
All the organisers got there nice and early and put out all the nibbles on the tables, pictures of Stewart on the wall, food for the buffet on tables in a cool part of the hall. Raffle prizes were placed near the stage so that everyone could see what they wouldn't win.


Everything was all set for the start of the biggest quiz yet.


I started my spiel with a joke... Fred Flintstone went to a party in the Middle East - it was an Abu Dhabi do.


Not that funny, but I thought it might get a laugh.


The ghost of Norman Collier was abroad. (Ask your dad.) The allegedly terrific sound system was playing silly beggars.


Thus, less than halfway through the quiz, we had no mike and it was a big hall; people had been struggling to hear me when I was using the microphone, now, they couldn't hear a thing. And to compound the problem, a party was kicking off in an adjacent room with music loud enough to force Manuel Noriega to surrender (Ask your dad.).


Who could help to sort out this shambles? Enter superhero Andy. He told us that they had a speaker and microphone at his church and that he could go and get it...


'They have a speaker and microphone at my church; I could go and get it.'


So Andy hotfooted it to his church in search of the said gear.


Meanwhile, back at the ranch, we had to do something to prevent the mob from getting angry. Food. That was the answer. Time to unwrap the buffet. Phew. Just what we needed.


By the time Andy returned with the mike and amp, the mob were suitably subdued thanks to the food and the copious amounts of booze consumed during this unscheduled interval.


The second half of the quiz was certainly an improvement on the first, although those seated close to the adjacent venue still had difficulty hearing me above the racket from next door.


The event turned from being something of a disaster into a not quite resounding success.


What was a success, however, was the amount raised for the Bobby Moore fund...


raised on the night. Not bad in the circumstances. Stewart would have been proud to see that his friends were working so hard to raise money for the charity which was so close to his heart... and bowels.


People's reactions to this year’s quiz? Mixed, I think...


‘The long breaks gave us a chance to have a wee chat with each other rather than having to concentrate totally on the quiz. Best one yet. Save us tickets for next year.’


‘We were totally put off by the interruptions; we couldn't concentrate on the quiz. The worst one ever. We won't be back.’ 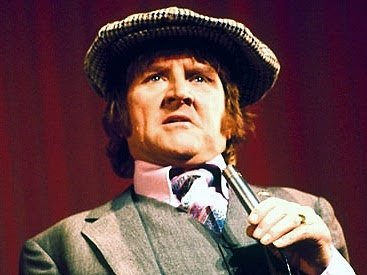 And finally Cyril? And finally, Esther, I am indebted to a Mr A. Previn for this week’s closing item. Andre Previn died just over a month ago aged 89 and as this extract from Wikipedia attests, he was respected musician...
André George Previn, born Andreas Ludwig Priwin; April 6, 1929 – February 28, 2019) was a German-American pianist, composer, arranger, and conductor.
His career was three-pronged. Starting by arranging and composing Hollywood film scores for Metro-Goldwyn-Mayer, Previn was involved in the music for over 50 films over his entire career. He won four academy awards for his film work and ten Grammy awards for his recordings (and one more for his lifetime achievement). He was also the music director of the Houston Symphony Orchestra, the Pittsburgh Symphony Orchestra, the Los Angeles Philharmonic, and the Oslo Philharmonic, as well as the principal conductor of the London Symphony Orchestra and the Royal Philharmonic Orchestra. In jazz, Previn was a pianist-interpreter and arranger of songs from the ‘Great American Songbook’, was piano-accompanist to singers of jazz standards, and was a trio pianist. All along the way, his efforts were recorded; much of the way, they garnered acclaim and awards.
Quite a career, I am sure you would agree. His personal life was no less colourful having been married five times. He famously fathered twins to third wife Mia Farrow while she was still married to Frank Sinatra (Brave man messing with ‘the hoodlum from Hoboken’.).
And yet his most celebrated moment of all was in 1971 when he became Mr Andrew Preview  for the night.
Unfortunately, that sketch is not available on-line in its entirety. Hopefully, that short tribute gives you a taste of the moment when Andre Previn became a comedy legend.
That’s all for this week folks, but remember you can read the musings of The Grambler every week by going to the blog at www.thegrambler.com
Happy grambling.
Posted by The Grambler at 12:05