Week 43/44 - The Grambler is finger-licking good

How about a joke from George to start us off? Take it away, George.


Knock knock... I’m pretending to be someone at the door.


I haven’t phoned for an appointment. I’m not even ill... apart from the excrutiating pain... You should be visiting someone who isn’t well enough to get to the surgery. Wasting NHS resources like that... You should be ashamed of yourself...


Too right it’s a joke. Can’t get an appointment for love nor money, normally... and you just turn up on someone’s doorstep nilly willy... There ought to be a law against it.


I’m only trying to tell a joke. That is all. I say knock knock. You say who’s there. Then I say Doctor and you say Doctor who...


Doctor Who? That’s that telly programme isn’t it? The one with those giant shuttlecocks going around threatening to excommunicate everyone. They’ll not do much excommunicating armed with a sink plunger and an egg whisk. Ooh, I never liked that programme. Gave me the willies it did. Is it still that Worzel Gummidge bloke that plays him? Drove around in a daft looking yellow car. I reckon he borrowed it off Noddy. What do you think George? George? Oh dear, he’s gone again.

Church fetes are great aren't they? I was recently at one and there were bargains galore to be picked up. Where else can you get half a dozen books, three dvds and a horrible 1980s style standard lamp and still have change from a quid? Sadly, it is also the perfect place to pick up something else... food poisoning. Sorry pardon excuse me?


All church events such as the one where I picked up my bargains (I was only kidding about the standard lamp...nobody wanted that monstrosity), offer another very much appreciated attraction... The tearoom, with the offer of a watery cup of tea (or weak coffee of you prefer) and lots of ‘home’ baking. Some of the cakes on offer are pretty dull. Some, such as carrot cake on this occasion, are just fantastic.


However, consider all those home-baked cakes that are on offer at church fetes and coffee mornings. Who knows their origins? They could be coming from the mankiest kitchen known to man before they end up on the doillied (I think I might have just made that word up.) plates in church halls up and down this land.


So thank goodness for health and safety regulations where it is stipulated that anyone preparing and handling food is required to attend a course which covers the importance of hygiene in such matters.


Thus, anyone that makes any food to be consumed at a venue such as a church knows that it must be baked, not in someone’s home but, on those premises with fresh ingredients. It also follows that the food, once prepared, must not be touched by anyone's hand. Food must be served using tongs or, at the very least, a hand covered by a (food quality) glove.


Hopefully, everyone abides by these very sensible rules.


Any road up, back to the fete I attended. Having purchased my bargains I sat myself down in the makeshift tearoom and it was nice to see my selection of cakes being placed on my tea plate with cake tongs.


Now, it so happened that I was quite late in heading for the tearoom; it was almost closing time, so those goodies that were left were being put into bags for people to take away... for a small donation, of course.


I took a pound or two out of my pocket ready to purchase a few examples of home baking... well, a few examples of that carrot cake. Whoever made it ought to be told that she makes the best carrot cake known to man... this man, anyway. It really is absolutely... oh dear, I've just dribbled on my keyboard... delicious.


There was only one lady packing up cakes and she was struggling to keep up with demand. So another lady offered to lend her a hand and suggested that she sort out the different types of cake into different containers. It certainly did speed things up.


Unfortunately, the helpful lady had neither bothered to wash her hands nor had she donned the gloves for handling food. She just picked everything up with her uncovered fingers. And the first cakes she put into containers? Carrot cake. I was almost ready to forgive her this dreadful sin... it really is terrific carrot cake... until she got some cream icing on her fingers. What did she do? She licked her fingers clean and continued to sort out the cakes. Needless to say, I changed my mind about buying any cakes.


Is that it, I hear you ask. Not quite, I respond. A week or so later, Mrs G brought some pancakes home from a coffee morning (held at the same church). Of course, me being a greedy so and so, I devoured a couple there and then.


That night I had to visit the loo several times. I blamed the pancakes. It was the only item of food which I had eaten that Mrs G hadn't and she remained as right as rain while I was hot-footing it to the toilet... well, as hot as my feet will work.


The next morning I told Mrs G of my suspicions. I asked who had made those dodgy pancakes... You're way ahead of me aren't you? Yep, it was none other than the finger licker, herself.


Remind me to steer clear of pancakes next time I go to a church fete.


We are so happy that you saw fit to include a clip from Scritti Politti, a much underrated band from the nineteen eighties. We have a teaser for you... Wood Beez was indeed their biggest hit, but their very first record to chart only reached number 64. It entered the top forty (just) when Madness recorded the song five years later. Can you remember what the song was?

Let’s move onto grambling matters. What happened with the last bet we had? Nothing. Sorry pardon excuse me? It lost. Big style. Not a penny back. Oh dear.


Let’s try again, shall we? What has The Grambler come up with this week? What randomly selected predictions are we going to get? Let us see...

Teaser time. Yay! Last week I gave you some anagrams to work out. How did you get on? The answers were...


Not so hateful - Nat Lofthouse


I did warn you that they were from way back.


One for this week? Here’s one about Arsenal manager Bertie Mee. Bertie took over as Arsenal’s manager in 1966 aged just 34, but what position did he hold at the club prior to prior to that appointment? Hmm... very interesting.

And finally Cyril? And finally, Esther, I am indebted to a Mr L. Lindley Jr, better known as Slim Pickens (Geddit?) who provides us with our finishing clip. Mr Pickens was an actor who specialised in rather one-dimensional not-very-bright cowboy roles where his utterances usually ended with the expletive ‘shoot’ followed by a spit. His most famous roles were in Blazing Saddles (as a cowboy) and Dr. Strangelove (Full title Dr. Strangelove or: How I Learned to Stop Worrying and Love the Bomb.) where he played a major in the U.S. Airforce... as a cowboy. Incidentally, here’s a factoid for you. Peter Sellers, already playing three roles in the film, was supposed to play the role of Major ‘King’ Kong (Pickens’ role) as well, but couldn’t come up with the right accent. Any road up, his loss was Pickens’ (and our) gain. Here is, arguably, the most famous moment from the film... Awoooo! Wahoooo! 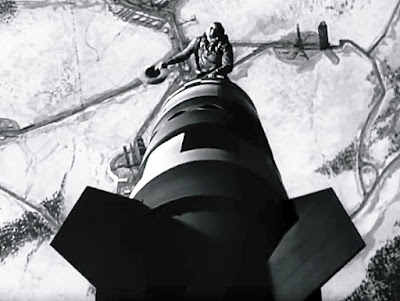 Another factoid: Prior to becoming an actor, Slim Pickens
was a real rodeo performer. Here he puts his skills
to good use.