Week 45 - Grambling at this year's Tea for Stewart

Let’s begin with a joke from George. Take it away George...

Why have you stopped?


I thought you were going to interrupt.


As if. Why would I do a thing like that? Perish the thought. Go on.


Okay. A gorilla goes into a bar and orders a pint. The barman gives him his drink and says, ‘That’ll be ten pounds, please... We don’t get many gorillas in here.’ and the gorilla says...


I thought you said driller as in oil industry. Or holes in road. Or dentistry. Gorilla? That’s ridiculous. Who ever heard of a gorilla going into a pub and ordering a drink as well?


And ten pounds a pint? That’s a bit steep. That gorilla’s being ripped off, I reckon. They think they can charge what they like in these places. Especially when it comes to primates who probably haven’t got much of a clue when it comes to financial matters.


Well, I’m saying it’s a bit steep at ten pounds, but this is being written BBB... before Boris and Brexit. Anyone who is reading this after Boris becomes PM and we have left the EU may well be longing for the days when a pint cost only a tenner.


Anyway, George, what was the gorilla about to say?

Those of you who have stuck with the world's greatest ill-informed blog will know that twice a year we, the family and friends of Stewart (the founder of thegrambler.com), run big money-raising events for the Bobby Moore Fund, the charity that Stewart always said was close to his heart and his bowels. In spring, the Kick Cancer's Backside quiz was held and raised lots of pennies for the BMF which, as you all know, does sterling work in improving treatments and looking for a cure for bowel cancer.


Sadly, for you readers, this week's blog will be incredibly dull [So what's new? - Ed.] because the event ran like clockwork. Mrs G, who organises the whole event has now got it down to a T (or tea, if you prefer) so there are no tales of cock ups, calamities and catastrophes to relate this year.


Mrs G has a veritable army of helpers on the day who have also been carrying out their duties for so long that they need very little guidance from her when it comes to serving the folk who come along to partake of the food and drink on offer.


And there are plenty of goodies on offer. A welcome drink is provided before the punters are even in their seats. For the non-drivers there is a choice of prosecco, sangria or Pimms [What's a pimm when it's at home? - Ed.] and for those in charge of the car keys there is pink lemonade. Coffee and tea is also provided in abundance, as is food.


Have you ever been to an afternoon tea? You will know, then, that the usual fayre comprises a sandwich or two, a scone and a cake or two. If prosecco is on offer, it is one small glass.


Something that Mrs G provides that no other afternoon tea does is a free raffle and a party game or two.


It all adds up to a fun afternoon.


Ah, you may be saying, all that food, drink and raffle prizes won't come cheaply. It must be quite pricey to attend this Tea for Stewart. Actually, no. The bread and pancakes are all donated by a local bakery which is keen to help charity events such as this. The same goes for the prosecco; a local business provides that. Some of the raw materials for sandwiches is provided by a well-known supermarket and friends rally round to provide most of the home baking.


Mrs G, of course, has been adding something into each week's shopping basket in readiness for the event throughout the year. By buying a little bit at a time, we don't notice the cost involved. Smart, huh?


So, apart from the last few days leading up to the tea being very labour intensive, there is no financial outlay, as such.


But you still haven't told us the cost to those attending, I hear you say. That must be quite hefty.


Well, no. There is no cost, per se. (Don't call me Percy.) The people who come along simply make a donation based on their perception of what the afternoon tea is worth. Some give generously, some give very generously.
So come on, you must be saying, how much was raised?


Are you ready? Drum roll please...


Confused? Well, the problem is that it is not possible to give you an accurate total as so many people are giving us money to add to the fund.


Last year we raised less than £2200 on the day of the tea, but the final amount raised was £2400. This year seems to be going the same way. £2290 was raised on the day, but we are still receiving those donations from folk.


So that's it. Thanks to everyone who helped, everybody who donated and to all those who came along and made the day a great success.


Incidentally, the hall used for Tea for Stewart was once again decorated in the colours of Motherwell F.C., the team supported by Stewart for most of his short life.


Is that it, I hear you ask. I’m afraid so. Nothing at all to report other than everything running smoothly. Oh, hang about; there was one little ‘odd’ moment.


It was to do with the supermarket donation. Mrs G was told to choose some ‘raw’ materials up to a certain value and the shop would pick up the tab. Great. She was also told to add a bottle of fizz and a nice pot plant to use as raffle prizes. Even greater.


So, having selected various foods such as eggs and cheese, she headed home and put the 60 eggs on to boil ready to be made into egg mayonaisse. So far, so dull. However, the telephone rang and a ‘representative’ from the supermarket instructed Mrs G that she had been given ‘too much’. Sorry pardon excuse me? Apparently, according to the individual who had taken it upon herself to phone, this extra outlay meant that the store had exceeded its monthly charity allocation. And? What point was this person trying to make? Did she want Mrs G to take back some of the goods? Do supermarkets allow eggs to be returned once they had been boiled?


What was the person making the phone call hoping to achieve? Mrs G decided that she needed to speak to the store manager about the matter and made an appointment to meet with him on the Monday following the afternoon tea.


Guess what. He knew nothing about anybody in the store being given the authority to make such a ridiculous phone call. He apologised profusely and asked the same question as us; what was the individual hoping to achieve from such action.


You will be pleased to know that we will be guaranteed a contribution towards any further events we have that require catering. Yay!


And we didn’t have to return any eggs. 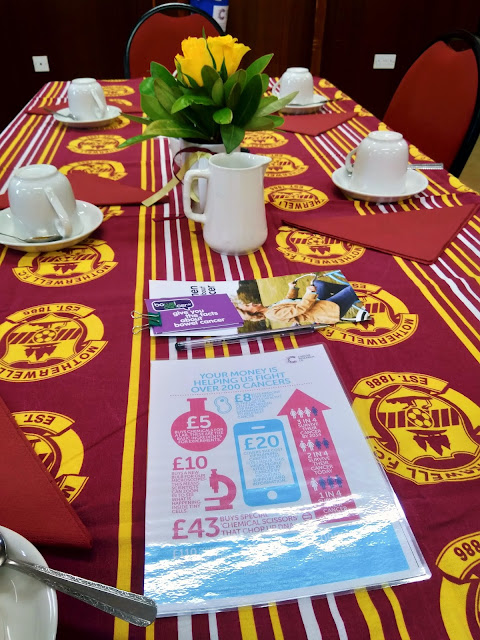 Before moving on, one important feature of our Tea for Stewart fundraising events is to raise awareness of the nasty, horrible disease known as bowel cancer. Tables are strewn with informative leaflets relating to this condition and its effects. We also give information on how money raised helps in the fight to improve treatments and (hopefully) provide a cure. Please, take the time to click on this link, an informative little video from Mersh (a great friend of Stewart’s).


I am writing to you from yur in the valleys, to ask you a question, isn’t it. I was a great fan of the Shadows, especially the early band when Jet Harris and Tony Meehan were the rhythm section. Naturally, I followed their careers after they left the Shads. I recall they had a number one, but can’t remember its title, boyo. Can you help?


Let’s try again, shall we? What has The Grambler come up with this week? What randomly selected predictions are we going to get? Let us see...

Teaser time. Yay! Last week I asked you about Arsenal manager Bertie Mee and what position did he hold at the club prior to prior to his appointment as manager. He was the... physiotherapist??? Yep.


One for this week?  Let's stick with football managers, shall we?  Liverpool manager Jurgen Klopp joined an elite band when he won the top trophy in Europe.  Three other Liverpool managers have lifted the Champions League or European Cup.  Who was the most successful of the four, winning the trophy on three occasions?  Hmm... That could start a discussion down the pub.

And finally Cyril? And finally, Esther, I am indebted to a Mr D. Allen, an Irish comedian who was one of Britain’s top comics from the 1970s to the 1980s. He made several series of Dave Allen at Large for the BBC and I wanted to finish with a clip from one of those shows.


However, I think Mr Allen, himself, should have the final word. Here was the gag which possibly ended his career at the Beeb...