The law is an ass. So said Charles Dickens character Mr Bumble, the workhouse beadle in Oliver Twist. He should have added that it was also incredibly expensive and wasteful of time. Why do I mention this? Recently, yours truly was called up for jury duty. It had to happen eventually I suppose; I have been lucky to avoid the call up (or is that conscription?) until now.  Expensive? Indeed.


Here is how it works. 140 people receive a citation to appear in court at 10am on a Monday morning. From this number, 15 jurors are selected. The rest are told to go home but come back the next day. It so happened that the week I attended, the case that was being heard on the Monday collapsed without a decision. So, on Tuesday the same 140 were there again and another 15 were going to be selected.


The way the selection is carried out is quite odd. A goldfish bowl is produced with all 140 names in it and the 15 unlucky ones are fished out (Do you see what I did there?). It's a bit like a game of bingo, except you don't shout house when your number is called, you simply mutter b*gg*r under your breath.


This same process continues all week and if you are fortunate enough to avoid selection, your stint as potential juror is finished; a different 140 will continue the process the next week.


I was unlucky. My name was plucked out of the bowl on Tuesday. Wasteful of time? I told you that we had to be at court for 10am; the selection of the jury takes well over an hour. And by the time the jury is sworn in [What, like, Come in you f*ck*ng tw*ts? - Ed.] Ahem... The time is approaching midday. There seems to be time for just a couple of introductory speeches and it’s time to adjourn for lunch.


Another thing really bothered me about the selection process. Now, every potential juror has a number; they could simply have called that out. But no, your name is called out and if anyone connected with the accused was so-minded, they could find out all about you if you are involved with social media. Indeed, while your name is being called out, the accused is already sitting in the dock... making mental notes probably.


Any road up, after lunch there might be half an hour or so of evidence being given when the sheriff (judge) suggests that the jurors might want a ‘comfort break’ for ten minutes. Ten minutes?  Hah!  Three quarters of an hour later we re-enter the courtroom only for one of the barristers [You get coffee too! - Ed.] Ahem... to ask the sheriff for an adjournment due to some legal point. All the jurors have to leave the courtroom again. Half an hour later we might get called back in, just in time for court to be adjourned again because it is nearly 4 o'clock.


This sort of thing went on all week. It took four days for a fairly straightforward trial to be completed. If more than a couple of hours of each day had been given over to actual court time, it could have finished a lot earlier, I am sure.


Of course I understand that there is a lot more to any case than actual courtroom time but, to me, it all seemed there was a lot of time wasted.


One thing that I did realise from the whole experience was that tv courtroom dramas are totally inaccurate. I can't remember ever seeing a television courtroom having jurors being selected as if a raffle was being drawn. I don't recall any times when Judge John Deed asks a jury to leave the courtroom while a legal point is discussed. I don't recall any comfort breaks on Rumpole of the Bailey.


I think it proves that accuracy does not necessarily make good tv.


We are fans of The Waterboys and really pleased that you gave us a link to their biggest hit. I wonder if you could see your way clear to giving us another clip; maybe a love song even.


Let’s move on to grambling matters. How did our little bet go last time? It won. Yay! Yes, we actually made a real profit. Honest. Nae kidding. £3.28 back from our £2.20 stake. Yay indeed. What happened? Read on.

Macclesfield vs Bradford - Prediction Away win


James Vaughan was Bradford's hero as his header rescued a point at Macclesfield, who finished with 10 men.


The striker put a shocking first-half miss behind him to score with little more than 15 minutes to play.


Macclesfield took a first-half lead through Jak McCourt's penalty and looked like seeing out victory before Vaughan finally showed his class with a fine finish.


The opening goal came just after the half-hour mark.


Corey O'Keeffe charged into the Bradford box and was sent tumbling by Ben Richards-Everton. After referee Scott Oldham had pointed to the spot, McCourt sent keeper Richard O'Donnell the wrong way with the penalty.


Bradford should have been a goal up before that but the unmarked Vaughan somehow put his finish wide in a real howler from six yards.


In the second half it was the hosts who went closer to notching another with set-pieces seeing Fraser Horsfall and Fiacre Kelleher go close with headers.


But after Macclesfield failed to see off the visitors, Vaughan struck, glancing in Harry Pritchard's wicked free-kick.


And though Bradford smelled blood late on with Connor Kirby dismissed for a second yellow card, they could not find a second goal and had to settle for a point.

Alloa vs Inverness - Prediction Away win


A mix-up in the home defence culminated in Scott Taggart diverting beyond his own goalkeeper Jamie MacDonald.


Louis Appere and Lawrence Shankland both finished smartly from 10 yards in the first half - the latter after ex-Motherwell man John Sutton's scrambled leveller.


It was the first United had conceded to an opposition player since mid-October.


But Morton could not fashion a second, despite repeatedly troubling United from-set plays.

Montrose vs Raith - Prediction Away win


Brechin vs Stenhousemuir - Prediction Away win

What has the great and powerful Grambler predicted for us this week?


The bets have been placed (10 x 20 pee doubles plus 1 x 20 pee accumulator) and if they all go according to The Grambler’s Predictions (Ha ha ha ha ha ha ha!), the Bobby Moore Fund stands to receive a whopping....

Teaser time. Yay! Last time I asked you who was the first reigning monarch to attend an F.A. Cup Final. The answer is, that well-known king, George V in 1914. Burnley beat Liverpool 1 - 0 watched by a crowd of over 72,000.


One for this week? Which ex-Premier League player scored with his very first touch of his senior career? Nice one to discuss int pub.


And finally Cyril? And finally, Esther, I am indebted to a Mr. C. Nash who is heard but not seen in this week’s finishing clip. This short animated film, which Disney termed a ‘Silly Symphony’ (which led to rival animation studios coming up with ‘Merry Melodies’ and ‘Loony Tunes’), was the first time the public got to see and hear Donald Duck. So, sit back and enjoy a rather different-looking duck to the one we know so well... obviously, even ducks change a bit in 85 years. Here’s The Wise Little Hen. 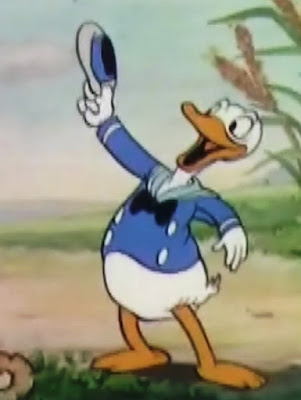 Donald Duck before the nose job