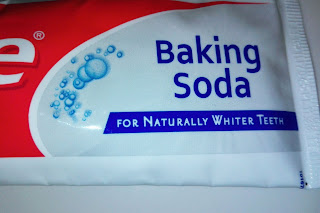 A tube of toothpaste

Interesting picture to start this week's (g)ramble don't you think? No? Well, it interested me. At least, the reference to baking soda caught my eye. Why? Because it is the only mention of baking soda on the tube. Obviously, we, the gullible public, are meant to assume that this tube of ordinary toothpaste contains this useful ingredient. But does it? Nowhere does it tell you that there is actually any of the stuff in the tube. It simply points out that baking soda is useful for whitening teeth. Good. I'm pleased about that. But why are they telling us this? I even checked the list of ingredients. No. Nothing there. If that is the case, and baking soda is indeed useful for whitening teeth, why are we buying this toothpaste at all? Baking soda would appear to be better according to the maker of this product.
Worse is another tube of what I assumed to be the same toothpaste. But it isn't. Oh no. Maximum cavity protection it proudly announces. Wow! That's quite a claim. Then they go and spoil it all by saying something stupid like [I love you? - Ed.] Ahem... something stupid like liquid calcium. Really? Doubt it very much. The melting point of calcium is 842° centigrade. Very unlikely that you would brush your teeth with something that hot.
It is just so typical of products like these. All toothpastes are, basically, the same thing: a paste or gel to clean teeth. Each probably does as good a job of it as the next. Getting the brushing action right is more important than the choice of paste. So, to make a particular product stand out, manufacturers have to come up with something special. Toothpaste with stripes anybody? Wow, that's clever. I'll have some of that, says the average punter. Hang on, say the makers of non stripey toothpaste, how do we compete with that? I know, let's make some really wild claims about how brilliant our product is.

However, there are organisations called advertising standards agencies which won't allow businesses to make wild, unsubstantiated (That's a good word. Must look it up) claims. Our toothpaste maker will have to tread carefully to avoid incurring their wrath.
This is why these silly non-committal statements are stuck on the side of toothpaste tubes. If anybody should complain that the baking soda in their toothpaste isn't making a blind bit of difference to their gnashers, the maker can simply ask, 'What baking soda? We never said it contained baking soda.' And they would be in the clear.
Similarly, the liquid calcium statement can be quickly dismissed. Nowhere is there any suggestion that the tube contains liquid calcium. There are simply two words placed side by side - liquid and calcium. They are meaningless. There is absolutely no possibility that this toothpaste could contain such a thing.
The example I have shown is an actual tube I have bought, as is the liquid calcium one. Apart from those words on the side of the packaging, they are identical. I decided that if two seemingly identical tubes could have two completely different 'odd' statements, perhaps there were others out there. And there are. Oh yes. Here are some belters...
Calci-lock? What the fu... what does that mean?
With Mini Bright Strips? Ditto.
Family Action? Sorry pardon excuse me? That sounds very suspect.
Baking Soda and Peroxide? Peroxide? Bleach? In toothpaste? I hope not.
Icy Blast Whitening? Again... What?
Plus Shine? Same.
Expert White? Uh huh.
The craziest aspect of all these silly statements, many of which are trademarks incidentally, is that they are all on the various products of just one company. The products... plural... are all toothpaste... singular. It would not surprise me in the least if it were proved that these tubes all contain identical paste. How would the company explain that one? Mark my words; it could happen. It could blow up into a real scandal. And you know what that means, don’t you? Yes, sticking a word on the end of whatever the scandal is about. You know what I mean. You do. Watch out for Colgate-gate.

Teaser time. Yay! Last time I asked you which footballer first gained media attention when his youth team won a game 23-0; a game in which he scored every single goal. It was Ronaldo de Assis Moreira, better known as Ronaldinho. Admittedly, he was only 13 when he achieved his feat. Not a bad way to get noticed, though.
One for this week? It’s a question relating to the F.A. Cup and royalty. Who was the first reigning monarch to attend an F.A. Cup Final?

As usual (at the risk of repeating myself), I remind you of the main reason for continuing to publish this blog – to raise awareness about bowel cancer. If you have any bowel problems, don’t be fobbed off with the line that you are too young for bowel cancer to be a consideration. Just point your doctor in the direction of http://www.bowelcanceruk.org.uk/campaigns-policy/latest-campaigns/never-too-young-campaign
.....oooOooo.....


And finally Cyril? And finally, Esther, it has been a sad week as the entertainment world lost two of its cleverest and wittiest TV people.
Doctor Jonathan Miller has been called a polymath. His career spanned comedy, art, medicine, directing both plays and opera... His talents seemed endless. He was the sort of person I could have enjoyed listening to no matter what topic he was talking about. Others were not so kind and saw him as something of a know-all. I recall a comedy panel show on which a comedian was asked what Jonathan Miller would never, ever say and he came up with ‘I couldn’t possibly comment; it’s a topic about which I know very little.’ Ouch.
Clive James was one of my favourite TV folk. His programmes were always watchable. I first took notice when he took over the ITV programme called Cinema. His predecessors had been informative but humourless. He added humour to the programme in spades. I think I tried to watch everything he subsequently made.
Perhaps this isn’t the best recognition of the genius of these two TV giants, but I thought it apt as here is Clive James interviewing Jonathan Miller on Saturday Night Clive.
That’s all for this week folks, but remember you can read the musings of The Grambler (almost) every week by going to the blog at www.thegrambler.com
Happy grambling.
Posted by The Grambler at 22:25