Just a short (g)ramble this week and it concerns the world of ageing and memory loss.  More specifically, my own memory loss...

I am at that age where I find that I am becoming ever more forgetful.  Not only do I forget what I went upstairs for, I go downstairs in order to work out why I was up there and completely forget why I came downstairs.

Names are a particular nuisance.   I’ll be watching something on TV when I spot a familiar face.  What’s she been in, I’ll ask Mrs G.  Who, she responds.   Her... thingy.  What’s her name?  Her; the one playing... oh, what’s the name of her character?

Of course, you can bet that I will lie in bed that night wide awake, not only trying to work out the name of this particular actress, but also thinking what production I had previously seen her in and, indeed, what character she had been playing in the programme I had watched that very night... the name of which escapes me.

Half way through the night, I will sit bolt upright and shout out, ‘Kelly Mulligan!’ much to Mrs G’s annoyance, not just because I had woken her up, but because I had still got the wrong name entirely and mixed up the names of two actresses in the process.

I also forget where I put things. I know everyone does that, but the instance I am about to relate must surely take the biscuit for utter stupidity.  On a recent occasion, I was leaving the house and couldn’t find the key to lock up.  I looked everywhere I could think of... drawers, trouser and coat pockets all got thoroughly searched, probably several times over.  Up the stairs I went.  Down the stairs.  Up again.  Down again.  Eventually, I was at a loss as to where the key had got to and was removing my coat, because I obviously couldn’t go out without locking the house.  It was then that I found the missing key.  Where?  In my left hand.

Oh dear.  Can it get any worse than that?  Of course it can.  The other day, thanks to lockdown restrictions easing, I was meeting a friend for a coffee.  We took our coats off and sat at a table waiting to be served.   It was then that my friend noticed something...

‘Why have you got a dessert spoon in your shirt pocket?’

I looked down and I had, indeed, got a spoon in my pocket.

‘You’re losing your marbles?’ he offered, trying to be helpful.

Were any famous or notorious individuals born on the 9th of October? Of course there were. Here are some that even I know.

John Lennon 1940 - Musician. Had a hit or two. A clip? I suppose so. Here’s a real oldie where John wants to hold your hand.

Rod Temperton 1949 - Musician. He was famous for writing a few songs, but began his career as writer and keyboard player for Heatwave. Shall we have a clip? How about some Boogie Nights?

David Cameron 1966 - Ex Prime Minister who foolishly thought the British public could decide that Brexit was not a good idea. Will he be remembered for that, though? Doubt it. Oink!

Mat Osman 1967 - Suede bassist and brother of Richard. A clip? I don’t see why not. Here’s some Trash.  That was their first number one... only in Finland, though.

Toby Jepson 1967 - Musician. Lead singer with Little Angels and, later, Gun. I think a clip is in order. Here’s an 80s-style bit of film featuring some big hair to accompany 90 In The Shade.

PJ Harvey 1969 - Singer-songwriter. Let’s Get Ready to Rumble. With Duncan. That was her, wasn’t it? Wasn’t it? Which is she? Ant or Dec? All right, I know she’s not a cheeky Geordie TV presenter. Would you like a clip? Shame.

Steve McQueen 1969 - Film director... not the bloke who drove the Ford Mustang in Bullitt.

Sian Evans 1971 - Singer. Here she is fronting Kosheen with It's All In My Head.

What about any famous folk born on the 16th of October?

Reginald Dixon 1904 - Organist at the Tower Ballroom in Blackpool. Here’s a little film from 1926 showing Blackpool’s Pleasure Beach; Reginald’s playing has been added. All together now... Oh, I do like to be beside the seaside...

Robert Urquhart 1921 - Actor. Henry Forbes in The Plane Makers. Him. Ask your dad.

Max Bygraves 1922 - Unfeasably popular entertainer. Here he sings Out of Town. [Not far enough out of town for my liking. - Ed.]

Angela Lansbury 1925 - Actress and singer. Here she is singing Beauty and the Beast... aged 90.

Lee Montague 1927 - Actor. Factoid. He has the distinction of being the very first storyteller on the Beeb’s long-running children’s programme, Jackanory.

Peter Bowles 1936 - Actor. Duke of Wellington in Victoria. Him.

Dave Hill 1945 - Actor. Currently playing Bert Chapman in All Creatures Great and Small. And, no, he never played guitar with Slade.

Nicholas Day 1947 - Actor. Played Jim Prior in The Crown.

Brinsley Forde 1953 - Actor and musician. He was a founder member of Aswad. Here, he takes lead vocals on Shine.

Anna Savva 1956 - Actress. Lugaretzia in The Durrells. Her.

Kelly Marie 1957 - Singer. She had a number one with Feels Like I’m in Love, but I’ve given you a link to that one before, so here is the less successful Hot Love, if only to give you a laugh at the garb that her two dancers have been forced to wear.

Gary Kemp 1959 - Musician. Famously, he and his brother Martin were both members of Spandau Ballet. Remember them? Of course, that was before they turned to crime as the Kray twins. A clip? You betcha. Here’s an early one, Musclebound.  That is one barking video.

Jon Poole aka Random Jon Poole 1969 - Musician. Has been involved with Cardiacs, The Wildhearts, Ginger, Silver Ginger 5, Ginger & The Sonic Circus, The Lotus Eaters and many other acts. A clip? I’ll see what I can do. Here are Cardiacs with Bellyeye.

Shayne Ward 1984 - Singer and actor. He won the second series of The X Factor and had a Christmas number one in 2005 with That's My Goal.

And, this being a three-week edition, here are the 23rd of October birthdays.

Frederick W. Lanchester 1868 - Engineer. As well as designing engines for boats and planes, he also built cars. He was an advanced thinker, designing a hybrid car as early as 1927.

Douglas Jardine 1900 - Crickety bloke. Famously came up with what became known as ‘bodyline’ which was a way of bowling that was pitched short so that the ball rose up to hit a batsman’s torso or head. Basically, it was aim to maim bowling. Just not cricket, old chep.

Jerome Willis 1928 - Actor. Charles Radley in Within These Walls. Him.

Anthony Bamford 1945 - Businessman. Chairman of JCB. You know, them big bugg... things you always get stuck behind on a busy winding road.

Pauline Black 1953 - Actress and singer. She was vocalist with The Selector. Let’s have a clip. Here’s Three Minute Hero.

Emilia Clarke 1986 - Actress. Daenerys Targeryen in Game of Thrones. Her.

It was so nice to hear one of your funny songs. I remember when you first began your career. Indeed, I used to have a copy of your very first album. Sadly, it is long gone. Like this week’s topic, the old memory isn’t what it was and I can’t even remember what the album was called. Can you help?

Cheltenham vs Rotherham - Away win

Doncaster vs MK Dons - Away win

Gillingham vs Wigan - Away win

Hamilton vs Inverness - Away win

Alloa vs Cove Rangers - Away win

What about some predictions for this week?

Ten 20 pee doubles plus a single 20 pee accumulator. If the results go as predicted by The Grambler, the Bobby Moore Fund will be richer to the tune of a whopping

Yay! How did you get on with last time’s five questions? Here are the answers.

I was born in 1938 in Glazebury, Lancashire. I joined Liverpool in 1958 and made 404 appearances in the next 11 years, scoring 244 goals. I was capped 34 times for England. I didn’t receive an official knighthood, but Liverpool fans always put ‘Sir’ before my name.

2. Dick Nanninga was the first substitute to score in a World Cup final; for whom?

3. Emlyn Hughes was capped 62 times; for which country?

Answer - Rochdale (Apologies for the phrasing of that question. Two cup finals took place that year; Aston Villa beat Rotherham in the other, which was in fact the postponed 1961 final. Clear? [As mud. - Ed.])

Five for this week? Okey dokey.

I was born in Stuttgart in 1967. I am 6’ 4” tall. I joined Mainz in 1990 and made 325 appearances between then and my retirement in 2001. I originally played as a striker but later in my career moved to defence. On retirement, I took on the task of managing the team. I remained there until 2008 when I moved on to manage Borussia Dortmund. In 2015 I moved to an English club.

2. Which club has been managed by Brian Clough and Jimmy Armfield?

3. Who scored Scotland’s only goal in the 1986 World Cup Finals in Mexico?

4. With which club did manager Bob Stokoe lift the FA Cup?

5. Which club plays at Turf Moor?

There you have it; five teasers to test you. Can you answer them without resorting to Googlie or Bung (or any other search engine, for that matter)?

In this clip, Antony Booth, as always, plays second fiddle to Warren Mitchell as Alf Garnett. If you are offended by racism from the 1970s, I should warn you not to click on this. 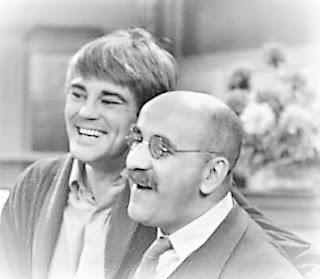