I mean, just what is the world coming to? You can't even slaughter a few dozen innocent creatures without some do gooder telling you it's not legal. Actually, they aren't complaining about the killing so much as the method of killing.

Let me explain. [I think you should before the RSPCC see this. - Ed.] I'm a gardener. There, I've admitted it. I like gardening. I've even been known to watch Gardeners World on telly. Anyway, gardeners up and down the land have for years used slug pellets as a means of getting rid of the little bas... blighters. But now, because of those animal welfare nutters, you're not allowed to use them any more. Apparently, they contain metaldehyde which is toxic to other animals such as hedgehogs, cats and dogs. Aww, shame. It might give them an upset tummy... Okay, it might actually kill them, but that's neither here nor there. How am I supposed to get rid of those slugs which seem to think the only reason I plant French marigolds is to give them a square meal?

I've always used slug pellets and, usually, they do the trick. Although quite often some poor creature meets its end by being the first to try and cross the blockade of pellets. Does this deter his mates from doing the same thing? Of course not, they use him as a bridge to get to those lovely green leaves.

Maybe he's a kamikaze slug, taking one for the team so that all the other gastropods can eat...

'Don't wait for me sarge. Just get the others through. Urgh!' (That's him snuffing it.)

So what is the recommended solution from the animal rights loonies? Beer. That's right. And the lighter the better apparently. Yep, slugs and snails prefer lager to Guinness.

I don't know details, but you are meant to put a dish of beer into your garden beds and tubs and gastropods are attracted to it. Indeed, they seem to be quite the bevvy merchants, these slugs; can't get enough of it. Put a dish in with your plants at night and the next day it will be full of dead slugs.

How does it work, I hear you ask. No idea, I say, but here's a thought.

I reckon that the slugs and snails come out for their midnight feast and when they smell the beer, think, 'Wahey! Booze. Shall we have a drink before we start the meal?' So they all start to sup this Tennent's lager or Holsten pis... I'm sorry I'll type that again... I meant pils. No, maybe I didn't. Any road up, before long, the little slimy chums are all merrily sloshed and telling each other, 'You're my best mate, do you know that?' when on of them pipes up, 'Hey, let's go for a midnight swim. Last one in's a nematode!'

And they all dive in before realising that slugs aren't equipped for swimming and commit mass gastropod suicide.

Well, can you come up with a better theory?

Were any famous or not so well-known individuals born on the 30th of April? Of course there were. Here are some that even I know... not many, though.

Dickie Davies 1933 - TV sports presenter.  He usually managed to keep cool on his World of Sport, but live TV being what it is, can lead to a few clangers being dropped. 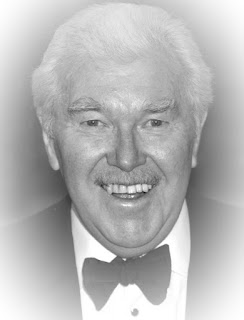 Shirley Cain 1935 - Actress. Catherine Coleman in Diamonds. No, I don’t remember that one either.

Bernie Clifton 1936 - Comedian famous for pretending to ride an ostrich. Seriously. It’s funny once, but he’s doing it for 50 years.

Merrill Osmond 1953 - Singer. A member of the famous singing troupe. Let’s have a clip. Here are the brothers Osmond, before Donny had managed to take over cuteness/precocious little tw*t duties, on one of their regular appearances on The Andy Williams Show singing Hello Dolly.  Great... didn't they?

Norman Smith 1959 - Political journalist... not the Norman Smith who called himself Hurricane Smith.

Tim Hawes 1965 - Musician and songwriter. He is responsible for writing this toon for Hear’say (Remember them?) which entered the Guinness Book of Records as the fastest selling debut single of all time. I think that may have been down to the fact that the group won TV talent show Popstars rather than the quality of the material. Anyway, here is Pure and Simple.  Apologies to anyone expecting the Lightning Seeds.

Pooky Quesnel 1966 - Actress. Louise Wilson in The A Word.

Steven Mackintosh 1967 - Actor. Chief Superintendent Winter in Lucky Man. 126 credits on IMDb and counting. First appeared on our screens in 1983 in an episode of Nanny.

It was wonderful to hear you singing that wonderful song Take Good Care of My Baby. So sad that you had to put your child up for adoption, but you could only have been about 18 at the time. You were perhaps too young to deal with all the responsibilities of parenthood. Perhaps you should have thought of contraception and you wouldn’t have found yourself in such a predicament. Did you ever meet up with your child? Anyway, what I would like to ask you is, what was your first UK top ten hit?

As there was no gramble last week, there is nothing to report so let’s move straight on to The Grambler’s predictions.

Well that isn’t very whopping, is it?

I was born in Llandudno in 1958. A goalkeeper, I began my senior career at Llandudno Town, but the bulk of my playing career was at Everton; I was there from 1981 to 1998 and hold the record of having the most first-team appearances for the club. I was capped for Wales 92 times.

2. Harry Rednapp is the uncle of which football manager?

Answer - They have all scored five goals in a match

4. Which player has made the most Champions League appearances?

5. Which club has the motto Arte et labore (which means by art and by labour) on its crest?

Five for this week? But of course.

I was born in Chuncheon, South Korea in 1992. A forward, I began my senior career with Hamburger SV before moving to Bayer Leverkusen. Two years later I became the most expensive Asian player in history when I signed with Tottenham Hotspur for £22 million. I have now played over two hundred games for the club, scoring 87 times so far. I have been capped 98 times for my national team.

2. Which Premier League club has had the longest uninterrupted run in the top flight?

3. Which goalkeeper holds the record for scoring goals with 131?

4. Talking of goalkeepers, who is the most expensive goalkeeper in history?

5. A daft one to finish. Name the teams in the current senior leagues in England and Scotland that have the word ‘ton’ in their name. Clue to help: there are n...n...n...n... nineteen.

Click on this link: https://www.youtube.com/watch?v=26HWQXMalX4. The amount raised is a little out of date, though. Check the Justgiving page link given at the beginning of this blog to see the current figure.

And finally, Cyril? And finally, Esther, I am indebted to a Mr. C. Hesketh-Harvey. Christopher ‘Kit’ Hesketh-Harvey first found a modicum of fame performing musical pieces with pianist and composer Richard Sisson as Kit and the Widow. Their style was likened to Flanders and Swann or Tom Lehrer. They stopped working together in 2011 and Hesketh-Harvey now performs with James McConnel as Kit and McConnel. It is they who provide this week’s closing piece. The item I have chosen is apt... sort of, given that the French presidential election took place this week and was won by Monsieur Macron.