When I were a lad [Uh oh, Hovis time. - Ed.] ahem... talking in a local accent was frowned upon. Us schoolkids were discouraged from using Glaswegian expressions. We actually used to have a period each week with an elocution teacher. I can picture her now, an older woman with blue rinsed hair and far too much makeup. Her name was Mrs Gerber and she was trying to get us to talk correctly. Well, her version of correctly. She would make us say the words, 'swim, swan, swim'. Her pronunciation was something like 'sweem, swan, sweem'. Our pronunciation was more like 'swum, swan, swum'. Broad Glaswegian. She asked me to say it and, had I used my own accent, I would have said swim, swan, swim, because I didn't talk with a Glaswegian twang, but for her benefit, I adopted one and joined everybody else by saying 'swum, swan, swum'. She left us with a shake of her blue rinsed hairdo obviously believing us to be a lost cause.

Why am I telling you this? Well, it seems that, these days, with regional accents disappearing, local ways of talking are positively encouraged. I thought, why not. So, sweem, swan, sweem...

Is it a wee story yiz are waanting? Here's a good yin fur yeez.

There's this wee duck, right? A right ugly wee cu... thing he wiz. And he'd loast his maw. Aw the other ducks used to chin him aboot it...

So aff he goes, intae the rough grun near a big loch, an he jist sties there aw winter. Well, come spring he thinks tae hisself, sod this fur a gemme o sujjers, I'm getting oot o here. I'm away back hame.

Well, nae sooner had he goat back, than he meets wan o the ducks that had been gien him a hard time.

'If ye don't believe us, away an look in the watter.'

Err ye go, eh. A happy ending fur the wee guy. Mind you, I'm no' sure why a duck should suddenly fancy a swan. Something no' right there, by the way.

Were any famous or not so well-known individuals born on the 17th of September? Of course there were. Here are some that even I have heard of.

Francis Chichester 1901 - Pensioner who sailed round the world single-handedly. Nowadays, the coastguard would be after him to prevent him from even attempting such a hare-brained scheme. Back in 1967, he got a blibbing knighthood!

John Creasey 1908 - Orfer. Created the characters Gideon of Scotland Yard and The Baron.

Steve Williams 1953 - Musician. One-time drummer for Budgie (That’s a band.). Would you like a clip? Your wish is my command. Here’s I Ain't No Mountain.  Shocking grammar.

Will Gregory 1959 - Musician and producer. Half of Goldfrapp. Another clip? Aye, go on then. Here’s Number 1. which reached number nine in the Yuk, but was a number one in the U.S. Dance chart.

Charles Lawson 1959 - Actor, so he is. Jim McDonald in Coronation Street so he was.

Dallas Campbell 1970 - TV presenter on The Gadget Show and Bang Goes The Theory.

It was great to hear a track from you and Miss Goldfrapp. Can you answer a question for me, please? What was the last Goldfrapp single to enter the UK singles chart?

As you are well aware, there were no predictions last week, so, hopefully, there will be no hiccups this week. [The death of Her Majesty the Queen is hardly a ‘hiccup’. - Ed.] As there were no matches to report last week, let’s move straight on to this week’s predictions from The Grambler...

I was born in Walthamstow in 1993. I began my senior career at Tottenham Hotspur and in 285 appearances have scored 188 goals. I have been capped 73 times scoring 50 times. I hold the record of scoring the most Premier League goals for a single club.

2. Erling Haaland has scored two Premier League hat tricks already this season, who is the only Norwegian to have scored more?

4. Which German player has made the most Premier League appearances?

5. Which club plays at the Gtech Community Stadium?

Shall we have five for this week?

I was born in Leeds in 1986. I am versatile, having played as a midfielder, winger and full-back. I began my senior career at Leeds, making my first-team debut at 16 and, at the time, was the youngest player to score in the Premier League. Apart from a brief loan spell at Swindon Town, all my career has been in the Premier League. After Leeds, I made moves to Newcastle, Aston Villa, Manchester City and, my current club, Liverpool.

2. What do Mario Zagallo, Franz Beckenbauer and Didier Deschamps have in common?

4. Which Australian player has made the most Premier League appearances?

5. Which club plays at Banks’s Stadium?

As usual (at the risk of repeating myself), I remind you of the main reason for continuing to publish this blog – to raise awareness about bowel cancer. If you have any bowel problems, don’t be fobbed off with the line that you are too young for bowel cancer to be a consideration. Just point your doctor in the direction of Never Too Young | Bowel Cancer UK

Click on this link: https://www.youtube.com/watch?v=26HWQXMalX4. The amount raised is a little out of date; it is now sitting at over £60,000.

And finally, Cyril? And finally, Esther, I am indebted to a Mr P. Glaze who, for nearly 30 years, appeared on the children’s television show, Crackerjack [CRACKERJACK! - Ed.] and the radio panel game Twenty Questions where a team of panelists had to guess a mystery object in 20 questions or less (His first question was always, ‘Can you sit on it?’ Oh, how we laughed.). Any road up, it seems that Peter Glaze was a favourite of Danny Baker’s, so please enjoy (if you can) Danny’s tribute to Peter Glaze.  Apologies for the ropey editing, it was obviously taped* on a VHS video recorder long ago.

*Taped - The word we oldies use whenever we have recorded anything, as, back in the mists of time, all recording media used a form of tape. 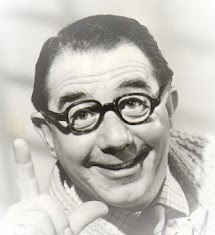