Last week I had a moan about milk prices being too low; this week I am going to moan [You? Never! - Ed.] about some other prices. I have a question for you. What company do you use for your phone/TV/broadband supply? I’m not being nosey. I just wondered if they had a sensible, structured pricing policy. The company which I use seems to have a very ‘unusual’ pricing setup. Basically, it is: How much can we make you pay before you threaten to leave making us cave in and reduce the price to keep your custom? It is, you have to admit, a strange way to fix tariffs and charges.


The company in question - I won’t say its name - which is owned by a beardy bloke with massive teeth in an equally huge gob, has provided my telephone, TV and broadband services for nigh on 16 years. Now, when I first began this contract, I was paying exactly 60 quid per month; a huge amount, you may think, but after paying TB (Do you see what I did there?) prices for years, it was actually a saving. Any road up, after some years paying this amount, a friend happened to mention that they paid only 30 quid for the same package. How so? They threatened to leave beardy bloke’s company and were offered a special rate to stay. Not fair, thinks I, so I tried the same trick...


‘I want to cancel my contract.’


‘Because my mate gets the same deal as me for half the price.’


‘All right. If we give you the same deal, will you stay?’


That was how easy it was.


Over the next few years the price increased with improvements to services and faster broadband, etc.


When the price was pushing 50 quid I happened to be accosted in my local shopping centre by a salesman from a rival company. Let’s call it Chat-Chat...


‘Who is your phone provider?’


‘Go away (or words to that effect),’ I said, without stopping. I know. Dead rude. As I walked on, he shouted after me something about being able to provide TV, phone and broadband for £30.


Naturally, I stopped in my tracks. 30 quid. I’m paying nearly 50. I retraced my steps and asked him for details. I returned home and, with the information before me, I telephoned beardy’s company...


‘I want to cancel my contract.’


‘Another company has offered me a better deal.’


‘And how much is the deal they are offering?’


Oh dear, I thought, they aren’t falling for it. The truth is, I didn’t really want the hassle of changing provider; I was really only chancing it...


A lot better than 50. Ya beauty! ‘I suppose I could be persuaded to stay.’


That happened two years ago and, true to form, there have been price rises along the way. Then, two months ago, I discovered that I was being charged over 50 quid again. Something wrong there, I reckoned...


‘Sorry? What? What loyalty rate?’


‘Hold it right there. What loyalty discount? This is the first time anyone has ever mentioned such a discount. You can’t retrospectively (That’s a good word. I must look it up.) decide that I had a discount which I am no longer entitled to!!!’


‘How does £43 and a new super duper clever record stuff type box sound?’


So, having read all that, can you explain their pricing policy as being any different to my interpretation of it? No, didn’t think you could.


What it all means is that I am still paying a lot less for my TV/phone/broadband than I was 16 years ago. And I didn’t have a super duper record stuff type box then, either.


Just don’t get me started on their mobile phone tariffs!!!


Now, who amongst that lot could provide us with a toon to gramblerise? There are plenty of contenders, certainly. Righteous brother, Bill Medley? You’ve lost that grambling feeling? Mama Cass and her Papas [I say. - Ed.] (and other Mama, of course)? California grambling? John Coghlan from off of Status Quo? Gramblin’ all over the world? Nile Rodgers from off of Chic? My feet keep grambling? No I think Lol Creme from 10cc should have the honour. By the bypass, do you know what the name 10cc is meant to signify? Well, apparently... [Don’t you dare! - Ed.]. All right then, here’s Rubber Bullets.


Premier League leaders Manchester City continued their 100% start to the season with an injury-time winner over Crystal Palace. I say injury time; it was actually 19 seconds short of the 90 minutes. It doesn’t sound anywhere near as exciting though, does it?


Nigerian teenager Kelechi Iheanacho (That’s a cracking name, that.), who had come on as a substitute just a minute before, stabbed home his first senior goal after Samir Nasri's shot was saved.


Stewart Downing superbly curled a shot from the right into the corner midway through the second half.


David Nugent then got his first Boro goal to wrap up the win when he finished a one-on-one chance.


The hosts' Drew Talbot was red-carded early on for a foul on Marvin Sordell, before Dan Jones' free-kick put them ahead.


Gavin Massey levelled from 12 yards, but, despite being a man light, Kim's lad, Lee Novak's close-range finish and Sam Morsy's volley put the hosts 3-1 up.


George Moncur replied from 15 yards two minutes later, before Charlie Raglan turned a stoppage-time cross into his own net. Pillock!


Norris hit the bar at the end of the first half, but shortly after the restart the visitors levelled.


Ryan Jackson turned Brad Potts' cross into his own net but, towards the end of the game, good work from replacement Rory Donnelly set up top scorer Bradley Dack to win it.


The visitors went ahead midway through the first half when Alan Forrest fired low into the net.


And Jordan Preston doubled their advantage just before the hour mark, pouncing on some poor defending to strike home.

Well, at least The Grambler got us some return on our stake last week. Can he/she/it improve on that and actually get us a profit for this week? Let’s have a look at this week’s predictions...


Stenhousemuir vs Dunfermline - Prediction Away win - 4/6


Let us hope that we improve on recent weeks and actually win as opposed to getting just some of our money back.


This week’s teaser? Of the top goalscorers in the English Premier League, who is the highest placed Scot (in position 53) having scored 68 premiershit goals?

And finally, Cyril? And finally Esther, I am indebted to a van driver (from the telecommunications company owned by a beardy bloke with massive teeth) for parking his van directly in front of my house. It enabled me to take this picture of the wording on its side... 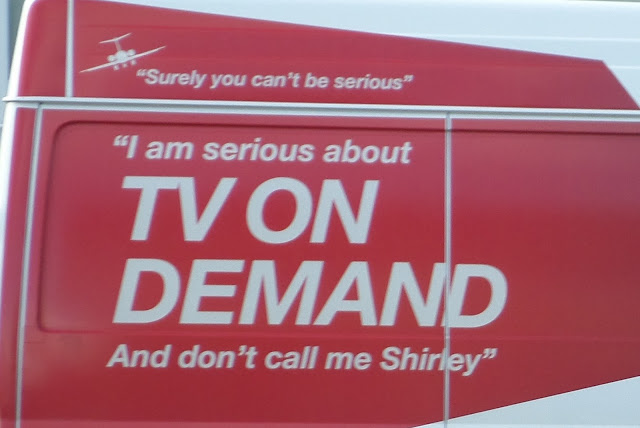 I recognise that gag.