Any road up, old Sewell was a bloke I couldn’t really take to. His clipped way of talking just grated on the lugholes as far as I was concerned. At least that was the case until I watched a programme he made about the surreallist artist, Salvador Dali.


When he was just a young pup, Sewell managed to spend some time at the great artist’s home at Portlligat. He told a story of his time with Dali that says a lot about the weirdness of the great artist, but also says a bit about Brian Sewell. The story goes that Brian was swimming around in Dali’s unusually shaped swimming pool when the great man asked if he could take some photographs. Not a problem, says Brian. Dali then asks him to take his swimming costume off and pose naked. What the hell, thinks Brian and duly obliges. Dali then asks him to indulge in a.. erm... monosexual act. What the hell, thinks Brian and begins to perform as required.


He said of Dali that he was obviously ‘turned on’ by this performance and clicked away with his camera, although Sewell says he doubted if there was any film in it.


It is a story which does not tally with Sewell’s later, cultured but utterly waspish persona. When Sewell wrote, be it a review or otherwise, he took no prisoners...


‘When Tracey Emin makes a neon sign, that’s not the “worst art”, it just isn’t art.’


‘Banksy should have been put down at birth...His work has no virtue.’


‘By and large, women are bloody awful painters. Don’t ask me why; they just are.’


On great female composers and writers: ‘Where is the female Mozart? Where’s Mrs Shakespeare?’


On Jane Austen: ‘She’s a terrible bore, writing about people I’m not remotely interested in.’


The day after Princess Diana died, he wrote a piece for the London Evening Standard wondering what all the fuss was about, when she was nothing but a whiny brood mare. Oddly, the piece was never published.


On the Arts Council: ‘An incestuous clique, politically correct in every endeavour, the instrument of the unscrupulous and self-seeking, rewarding the briefly fashionable and incompetent.’


On why he had not been made a director of Christie’s, the auction house: ‘I sleep with the wrong people.’


On David Hockney: ‘[He owed his fame] entirely to his homosexuality.’


Brian Sewell... probably not the nicest person to know.


Now, who amongst that lot could provide us with a toon to gramblerise? Julie London? Gramble me a river? Hmm. Maybe not. Lynn Anderson? I beg your pardon, I didn’t gramble you a rose garden? I know. Let’s have the third most recorded song.  Wrong season, I know, but here it is anyway...


Summertime,
And the gramblin' is easy
Fish are gramblin'
And the cotton is high

Oh, Your daddy's rich
And your mamma's good lookin'
So hush little baby
Don't you cry

Let’s move on to grambling matters. How did our bet go last week? We made a slight improvement on last week. By the grand sum of tuppence! Yes, this week The Grambler’s predictions brought us a return of £1.55 instead of the £1.53 of the previous week. Woo bloody hoo.  Here is just a quick rundown of the results.


Livingston vs Hibs - Prediction Away win


Stenhousemuir vs Dunfermline - Prediction Away win


Let’s see what The Grambler comes up with this week. Can he/she/it predict his/her/its way to profit?  Here, ladeez and genullum are your five random selections from this week’s games (all of which take place at 3pm on Saturday the 26th of September).


Hmm... What do you reckon? Do you think this could be our week? No, neither do I.

Teaser time! Yay! Last week I asked you who was the highest placed Scot in the English Premiershit’s chart of top goalscorers. So coming in at position 53, pop pickers, it’s Duncan ‘Have a go’ Ferguson who scored 68 premiershit goals. Not arf!


One for this week... Who was the last British player to be the top scorer in a Champions League or European Cup competition? A good one to test your mates down the pub, methinks.

And finally, Cyril? And finally Esther, I am indebted to a Mr J. Gleason who provides us with this week’s album cover... 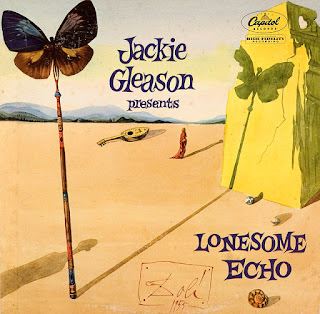 Spot the signature. Yes, old Salvi, himself.   The great artist describes the artwork thus: “The first effect is that of anguish, of space, and of solitude. Secondly, the fragility of the wings of a butterfly, projecting long shadows of late afternoon, reverberates in the landscape like an echo. The feminine element, distant and isolated, forms a perfect triangle with the musical instrument and its other echo, the shell.” Hmm. That’s top bollocks there, mate.