This week’s topic concerns fashion. Sorry pardon excuse me?   Not fashion in general, but a very particular fashion that seems to have happened over the past few months. It is the current trend for men, mainly, to grow big, bushy, f***off beards. When and why did that happen? The last time that type of facial growth was popular was back in the 19th century. Think W.G. Grace or Charles Darwin. The only more recent examples I can think of were those ZZ Top geetarists. That’s zed zed top where I come from, none of this zee zee nonsense. Oh, I forgot Brian Blessed. Hang on, that isn’t loud enough. BRIAN BLESSED. Still not loud enough. BRIAN BLESSED!!!! GORDON’S ALIVE!!!! A few tramps obviously fit into the category. And new age fathers. You know the ones. Their children wear Laura Ashley dresses and welly boots. Probably called Jocasta or Melanie. And the girls are no better. Boom and, indeed, tish. Suddenly, though, every Tom, Dick and (Prince) Harry are sporting whiskers which make Santa Claus’s look trim. Why is that? Laziness? Perhaps they just can’t be bothered shaving. That isn’t really true though. Often, the beard is bushy but the top of the napper is shaved bald. Perhaps they are trying to pretend that their heads are on upside down.


What does surprise me is that manufacturers of male ‘grooming’ products haven’t latched on to this growing (literally) market...


‘Gentlemen, is your beard greasy and unmanageable? Do people say you look like an old tramp? Then get Glosso. The beard shampoo just for men... and... erm... women... with beards.’


‘Hey, beardy! Why so glum? Uh oh. It’s that beard doesn’t match the hair moment when you realise that your hair is dark but your beard is ginger. Well, worry no more carrot chops, help is at hand. Use Roman 2000, the colourant made especially for beards. It’s to dye for.’


Another thing I can’t understand is that, while hair styles can be anything from shaven into the wood to being so flamboyant that you wonder how it can remain in such a position, beards are always quite boring in their symmetrical simplicity. I predict a change a coming, though. I’m sure it won’t be long until assymetrical beards become a fashion statement. You read it here first, folks.  How is this for starters? 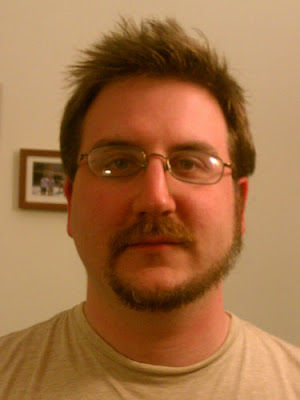 
But am I 200 years too late in my prediction? You what, I hear you ask. Apparently, Frederic Chopin, him off of composing, had a lopsided beard. Seriously. He wanted to follow the beardy fashion of the day, but he had pretty uneven beard growth so it only grew well on one side of his face. He joked that he deliberately grew it that way as audiences only saw one side of his face when he was seated at the old Joanna. Who’d have thought that Chopin actually had a sense of humour?

Any birthdays to celebrate this Saturday, the 17th of October? Why, yes. Exactly, a few. Arthur Miller 1915 (Playwright often more remembered for the fact that he was married to Marilyn Monroe. The headline in the paper the day they wed was ‘Egghead weds Hourglass’. They remained together for only five years. Miller was quoted as saying, ‘I love her too, but our neuroses just don’t match.’), Rita Hayworth 1918 (Cover girl.), Montgomery Clift 1920 (The longest suicide in Hollywood history.), Johnny Haynes 1934 (Footy bloke.), Robert ‘Evel’ Knieval 1938 (Motor cycle nutter. Apparently broke 433 bones in his lifetime. As we only have 206, it is safe to assume that some got broken many times.), Peter Stringfellow 1940 (Trivia: He was a warm-up act on Ready Steady Go in 1964.), Jim Smith 1940 (The Bald Eagle), Gary Puckett 1942 (Rhyming slang.), Vicki Hodge 1946 (A model/actress who has ‘dated’, among others, Yul Brynner, Eliott Gould, David Bailey, Ringo Starr, John Bindon, Rod Stewart, Prince Andrew, Old Uncle Tom Cobbley and all, Old Uncle Tom Cobbley and all.), Cameron Mackintosh 1946 (Trivia: He is the third richest man in the British music industry. (Cue Fluff Freeman impression.) Who is top, then, pop pickers? At number 2, up from number 3, It’s Andrew Lloyd Webber carburettors. That’s right. And it’s a return to number 1 from number 2 for Clive Calder. Not arf. That is dependent on whether ultra-rich Edgar Brontman decides to stay in Britain or not. Right? Orlright.), Dolph Lundgren 1959 (Tree.), Mark Gatiss 1966 (Mama Lazarou.), Ziggy Marley 1968 (David Bowie character.), Ernie Els 1969 (Golfy bloke.), Marshall Mathers 1972 (Hip hop artist better known as Smarty... Hang on...), Wyclef Jean 1972 (A Fugee.) and Kimi Raikkonen 1979 (Car racey bloke.).


Hmm. Anyone in there to give us a toon to gramblerise? Eminem? Do me a favour. Ziggy Marley? I should cocoa. Only one contender: Wyclef Jean of Fugees fame. They had a hit with an old Roberta Flack song...


I was going to gramblerise the Gary Puckett (and his Union Gap) song Young Girl. I had never taken much notice of the lyrics before, but they really were incredibly suspect...


Young girl, get out of my mind
My love for you is way out of line
Better run, girl
You're much too young, girl

With all the charms of a woman
You've kept the secret of your youth
You led me to believe
You're old enough to give me Love
And now it hurts to know the truth, oh

Beneath your perfume and make-up
You're just a baby in disguise
And though you know
That it is wrong to be alone with me
That come on look is in your eyes, oh

So hurry home to your mama
I'm sure she wonders where you are
Get out of here before I have the time
To change my mind
'Cause I'm afraid we'll go too far, oh

Young girl, get out of my mind

Let’s move on to grambling matters. How did our bet go last week? Well, after things improving week by week recently, last week we came back to earth with a bump. We didn’t lose exactly, but 77 pees return is a bit rubbish. What happened? All is revealed below, fair reader...


Crewe registered only their second win of the season as Lauri Dalla Valle's late goal beat Barnsley at Oakwell.


Dalla Valle chested home Adam King's cross after the home side had dominated much of the second half.


Crewe took the lead when midfielder Ryan Colclough picked himself up after being fouled by Alfie Mawson and thumped home the free-kick.


Mawson soon headed the equaliser, but Barnsley paid the price for failing to take a series of chances for a second.


Not a good start for The Grambler.


Carlisle captain Danny Grainger put the hosts ahead with a curling 18-yard effort, but Shaun Miller equalised with a 20-yard drive.


Morecambe's leading scorer Tom Barkhuizen raced away to slot his sixth of the season and give them the lead.


Miller made it 3-1 with a close-range finish before Derek Asamoah lashed home a late consolation for Carlisle.


It’s not looking good for The Grambler.


Keith ‘Whispering Ted’ Lowe gave York the lead late in the first half as he picked up John McCombe's pass and fired into the roof of the net.


Luton fought back after the break, with Cameron McGeehan slotting home a penalty after Dan Potts was fouled.


Luke Wilkinson came close to securing victory for Luton, but his header was tipped over by keeper Scott ‘Polly’ Flinders.


Oh dear Grambler; this is awful.


George Baldock finally broke the deadlock from 25 yards, his shot flying past keeper James Shea into the corner of the net.


Queen of the South vs Morton - Prediction Home win


Derek ‘Tate and’ Lyle headed home Alex ‘Anita’ Harris's cross to give Queens the lead just before the quarter-hour mark.


Ryan Conroy's shot trickled wide and Harris' long-range effort was tipped over as the hosts pushed for a second.


Morton crept back into the game, though, and Alex Samuel had a shot from eight yards out for the visitors, but it went over.


Pretty rubbish predictions from The Grambler. What has he/she/it randomly selected for us this week? A full card this week with 55 games to randomly select from. And The Grambler has chosen these five games which take place on Saturday the 17th of October at 3pm...


Too easy? What about one for this week? For which player did Liverpool pay Everton £6 million in 2000; still a record for a transfer between the clubs?


Once again, let’s finish with a mention of the main reason for continuing to publish this blog – to raise awareness about bowel cancer. If you have any bowel problems, don’t be fobbed off with the line that you are too young for bowel cancer to be a consideration. Just point your doctor in the direction of http://www.bowelcanceruk.org.uk/campaigns-policy/latest-campaigns/never-too-young-campaign .


And finally, Cyril? And finally Esther, I am indebted to a Mr H. Langseth of North Dakota (pictured below) who lived from 1846 til 1927; he began growing his beard at the age of 19 and never shaved it off. 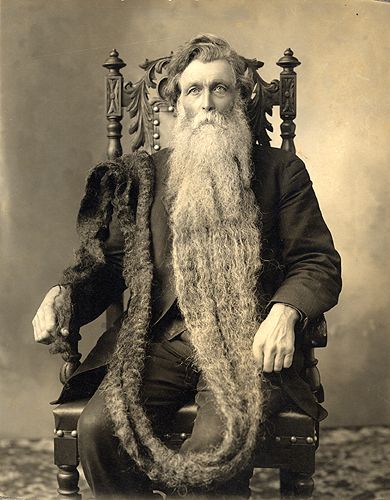