What is this week’s (g)ramble? Observation. Sorry pardon excuse me? This week I have been people watching. Admit it. You do it too.  Any road up, by doing so, I have come up with this week’s article...


I was visiting a famous Scottish city this week. See if you can guess which one from this description of some other bloke who was there. A gentleman, aged about 40, was walking (swaggering) along the street. He seemed to be rather proud of his sartorial elegance. His hair looked almost Dickensian; it seemed to be combed forward from behind his ears. Of course he had the obligatory bushy beard (see last week’s article). His hair was not what intrigued me; it was what he was wearing. He wore a cravat - that in itself is unusual - of a green hue which almost perfectly didn’t go with his orange waistcoat. Over the waistcoat he wore a tweed jacket which had a colour not dissimilar to the waistcoat, although it was more orangy brown than just orange. He wore trousers that are tartan; these are known as trews, or tartan trousers, if you prefer. Not for him something subdued like the Black Watch tartan, no, he had the brightest blue tartan imaginable. Remember the rest of the ensemble? Green, orange and now blue. A shrinking violet? I think not. Wait, there’s more. What would be the right shoes for such an outfit? Well, basically, anything. He could have worn pink spotted wellies and they probably wouldn’t have seemed out of place. what he did wear were black, patent-leather, slip-on shoes. His trews were a little short in the leg so his choice of sock was also visible. The colour was bright red, the colour that Billy Connolly describes as (screams) ‘RED!!!’ Have you guessed the city yet? The fact that this guy could walk about (almost) unnoticed, means that it could only be Edinburgh. If you have ever been to Edinburgh, you will understand exactly what I mean. When it comes to attire, the more flamboyant, the better. You’re colour blind, you say? Excellent, you can wear any mix of colours and no-one would bat an eyelid. American, with tenuous Scottish links? Sure, full highland dress is perfectly acceptable. Honestly, anything goes. If someone were to wear doublet and hose, he probably wouldn’t get a second glance.


The second part of this week’s (g)ramble also concerns dress. Before I describe the outfit, please remember the date. It is October. The city is Edinburgh. In Scotland. Normally, October is chilly. Frosts can begin as early as late August. This year, the climate has been mild. We still haven’t had our first touch of frost, so I suppose a guy walking about in vest top, shorts and flip flops is not so very odd. Incidentally, he also sported a bushy beard. So, what made me notice him? This took place in a shop. He was making a purchase. Nothing odd about that. It was the clothes and the item he bought which just looked a little incongruous (That’s a good word. I must look it up.). What was he buying? A snow shovel! While wearing shorts and flip flops! It’s definitely different.


The third tale has nothing to do with dress. Nor does Edinburgh feature. Last week while walking from my car to the football ground (Motherwell vs Celtic - we lost.) I saw an incident which makes me despair for mankind (well, the mankind round our way). Ahead of me were walking two men flanking a small boy aged about 7. The boy was drinking from a bottle of irn-bru (the well-known pick-me-up), as was his father. I’m assuming it was his father. Hope so, anyway. The boy swallowed the last of his drink and promptly attempted to lob the empty bottle over a high fence into somebody’s garden. It didn’t make it, but landed on the pavement beside the boy. What did the father do? Berate his son for being a litter lout? Not on your Nellie. Tell the boy to pick the bottle up and deposit it in the nearest bin? As if. No, he passed his own, now empty, bottle to the lad with the words, ‘Here, try it with this one.’ The boy managed to lob it into the garden this time. He and his dad cheered at this success and even high-fived one another. As I said; I despair.

Any birthdays to celebrate this Saturday, the 24th of October? Why, yes. Approximately, several. Sybil Thorndyke 1882 (Ectress, dear laddie. Trivia: she was the first actress to appear on a postage stamp.), Jack Warner 1896 (Oy, mind my bike.), Tito Gobbi 1913 (A rerr chanter.), Gilbert Becaud 1927 (Another chanter. Trivia: His song Et maintenant was one of the most successful singles in French music history. The English version What Now My Love was a hit for Shirley Bassey, Frank Sinatra, Sonny and Cher, Judy Garland, Elvis Presley, Andy Williams, Old Uncle Tom Cobbley and all, Old Uncle Tom Cobbley and all.), Jiles Perry Richardson 1930 (Who? Oh, the Big Bopper. Trivia: Waylon Jennings gave up his seat on the plane which took off on 3rd February 1959 because Jape - as his family called him - was running a fever.), Bill Wyman 1936 (Je suis un rock star.), Kevin Kline 1947 (He could have been Batman, you know.), Paul and Barry Ryan 1948 (The Chuckle Brothers.), Dervla Kirwan 1971 (I’m going to be Mary.), Jackie McNamara 1973 (Gizza job.), Wean Rooney 1985 (Footy bloke) and John Ruddy 1986 (Another footy bloke... used to be Motherwell’s goalie.)


Hmm. Anyone in there to give us a toon to gramblerise? Gilbert Becaud? I think not. The Big Bopper? Oh no no no. Paul or Barry Ryan? Nah. What about Bill Wyman? What about a smidgin (They can’t touch you for it.) of Je suis un Rockstar?

Let’s move on to grambling matters. How did our bet go last week? Not very well at all. A 50 pees return is all we got. What happened? All is revealed below, fair reader...


Jose ‘Bella’ Fonte's first goal for 18 months gave the hosts the lead, glancing in a header from Dusan Tadic's corner.


Virgil ‘Dick’ van Dijk earlier saw a header cleared off the line, but he doubled the lead with a close-range prod.


Vardy headed the Foxes back into the match, before blasting home his ninth of the season in injury time.


Bad start for The Grambler


Diego Fabbrini and David Nugent were both denied by Fulham's Andy Lonergan, while Dimi Konstantopoulos crucially denied ex-Motherwell striker, Ross McCormack at the other end.


His second-half header from Lucas Piazon's cross finally made Reading's dominance count after the Addicks were reduced to 10 men.


Defender Patrick ‘Jack’ Bauer picked up a second yellow card as he tripped Blackman on the edge of the area.


Marc Antoine-Fortune, Adam Armstrong, Ryan Kent and Chris Stokes all had first-half chances for the hosts.


Blackpool's best chance fell to Mark Cullen in the second half, but the Seasiders striker fired wide.


Adam Campbell also hit the woodwork with a cross-turned-shot for the hosts and Krysiak saved from Liam Noble.


Stanley Aborah's deflected free-kick put the Magpies ahead and McLeod add a second with a well-struck effort.


All together now... Everybody Stanley... Keep it in the family... etc.


Well, that was all a bit sh... disappointing. Can The Grambler make amends this week? There are 50 games taking place at 3pm, Saturday, the 24th of October; which five has The Grambler randomly selected?


That’s not much, is it? Still, if it comes up, it will be our best result of the season so far. Could this be the one? I think I asked that last week [And just about every week for the past two years. - Ed.]


Hooray, it’s teaser time. Last week I asked which player Liverpool paid Everton £6 million for in 2000; still a record for a transfer between the clubs. The answer is Nick Barmby.


What about a teaser for this week? How about a current(ish) question? Last weekend Georginio Wijnaldum (Try saying that after downing a couple of sherries.) scored four for Newcastle against Norwich (Hope Norwich's ex-Motherwell goalie, birthday boy, John Ruddy has a better time against West Ham.). Only two other players from the Netherlands have scored hat-tricks in the English Premiershit. Can you name them?


And finally, Cyril? And finally Esther, I am indebted to a Mr B. Schweinsteiger who is considering taking legal action against the Chinese company ‘Dragon in Dream’ which produces expensive and life-like war figures. One such is a WWII Nazi officer with the title ‘World War II Army Supply Duty - Bastian’ which bears a striking resemblance to Mr Schweinsteiger, whose forename just happens to be Bastian. A spokesperson for the manufacturer said, “We don't sell any figures which resemble footballers. It is a complete coincidence that the figure 'Bastian' looks like Schweinsteiger. We thought that all Germans look like that. Bastian is also a very common name in Germany.” Hans is a common name in Germany, or Fritz... but Bastian? Is he right to sue? Judge for yourselves. 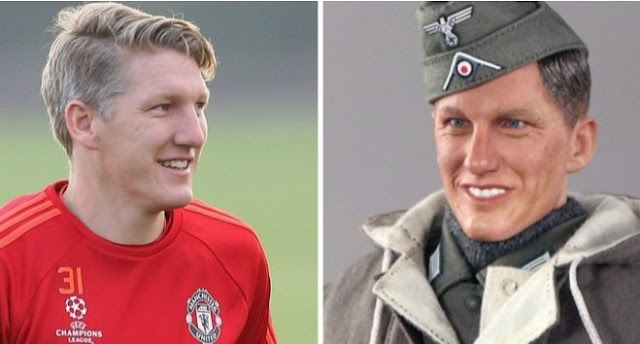 Erm... I think Schweinsteiger is the one on the left.
Happy Grambling.