Week 15 - The Grambler and the truth about Adolf Hitler

Well, have you all got over the shock of the US presidential election? Not that the election was a shock. We knew that was coming. We were shocked by the outcome. Nobody expected a megalomaniac with a dodgy haircut who hates just about every other race of people to become the leader of one of the most powerful nations on Earth... Hang on.


What causes somebody to be so hateful and bullying that they will stop at nothing to achieve dominance over everyone. Is it nature? Nurture? Or how about a single incident which polarises their mind to want to eradicate the world of anyone who is, well, different to them.


Come with me, if you will, to a medical officer’s surgery sometime during the First World War...


'Ah, Corporal Hitler. Do come in.'
'Call me Adolf. Everyone does.'
'Is there something wrong?'
'No no. Excuse me for staring, but it is so unusual to see a black doctor.'
'Does that bother you?'
'No no. Quite the opposite. So refreshing to see you getting on in this white man's world, Dr... er...'
'Goldstein.'
'Goldstein! You're Jewish! What a coincidence. I'm a bit Jewish myself, oy vey.'
'Excellent. Now if we can get on with business...'
'Who's that in the picture?'
'Pardon?'
'The photograph on your desk.'
'That's my partner, Sergei.'
'Another doctor!'
'No no. When I say partner, I mean as in life partner...'
'Oh. Sorry. I see. I didn't think...'
'Does that offend you in any way?
'No no no. Not at all. Each to his own. Live and let live, I always say. He's quite a swarthy chap... Not as swarthy as you though. Ha ha!'
'Ha ha. No he is from Romany stock. A gypsy.'
'When the war's over I could get him to sort out my driveway. Ha ha! Sergei, you say?'
'Yes, he's Russian... Are you political at all?'
'No, I don't really bother about politics.'
'Sergei's involved with a revolution in his home country.'
'How do you mean?'
'He and I and thousands of like-minded people are planning to overthrow the monarchy in Russia and create a communist state?'
'A what?'
'A communist state. Where the wealth of the country is shared equally among all the people.'
'What a brilliant idea! Well, good luck to you and Sergei with that. I hope you succeed. Er... What was it you wanted to see me about?'
'Oh yes. Bad news, I'm afraid.'
'About what?'
'The swelling in your groin. I'm sorry to tell you that we can only save one. The other one will have to be removed!'


Boom and indeed, as it were, tish!

So Gordon Strachan is to remain as Scotland boss after a pretty hopeless World Cup qualifying campaign. I am sure all Scottish football fans are quite happy that the Scottish FA’s board has seen the sense to retain the national team’s manager. Scotland may not qualify for the World Cup, but the team can (occasionally) play well; it wouldn’t make much sense to bring in someone new at this time. I can only think of one person who might not be so happy about the decision. Who? I can’t name names, but he’s a red-headed fellow, about 5’ 6” tall who makes cheeky comments to press men.

East Kilbride FC continue to extend their unbeaten run and have (at the time of writing) won 30 games on the trot. Of course, it can’t go on and on, they will eventually face a stronger team, but it certainly looks as if they will gain promotion to the Scottish Second Division (or 4th division in old money) at the end of this season. They already sit top of the catchily named Ferrari Packaging Lowland League, 14 points clear of their nearest rival. And you know what promotion means, don’t you? Yes, they come under the umbrella of games The Grambler would randomly select from. Yay! Let’s hear it for the Kilby.

Were any famous or notorious people born on the 19th of November? Let’s have a butchers. Charles I 1600 (Monarch who was cut off in his prime.), James A. Garfield 1831 (Cat that became president of the good ol’ U S of A.), Clifton Webb 1889 (Ectaw. Close friend of Noel Cowerd. Nuff said.), Tommy Dorsey 1905 (The sentimental gentleman of swing. Remember last week’s off-key birthday girl Jo Stafford? Well, here is the Tommy Dorsey orchestra with Stafford on vocals. Quite a difference, eh?), Indira Ghandi 1917 (Woman of the millennium according to a 1999 poll.), Alan Young 1919 (Voice of Scrooge McDuck.), Gene Tierney 1920 (Ectress with a bloke’s name.), William Russell 1924 (Ectaw. Doctor Who’s original companion. [I never knew Doctor Who was that way inclined. - Ed.] Later married Rita in Corrie.), Larry King 1933 (Talk show host.), Dick Cavett 1936 (Talk show host. What are the chances of that happening?), Ray Collins 1937 (A Mother of Invention. Want a clip? Didn’t think you would.), Warren ‘Pete’ Moore 1939 (A Miracle. Time for a clip? All together now.  People say I'm the life of the party...), Dan Haggerty 1941 (So grumpy he was known as Grizzly.), Calvin Klein 1942 (Underpants salesman.), Fred Lipsius 1943 (A Blood, Sweat and/or Tear. Another clip? Fred's in there somewhere.), Dennis Taylor 1949 (Snookery bloke who loves yogurt.), Meg Ryan 1961 (Ectress whose scene in a diner in When Harry Met Sally has been parodied hunners of times. Would you like to see a clip? Well, tough. This is a family blog.), Alicia Christian ‘Jodie’ Foster 1962 (Ectresh. Played Clarish Shtarling in Shilensh of the Lamsh.), Alexis, Brandon, Joel, Kelsey, Kenneth, Natalie and Nathaniel McCaughey 1997 (Septuplets... In case you hadn’t worked that out.).


Let’s move on to grambling matters. What happened last week? We won. Sort of. We just didn’t win enough to cover the stake money. How much? £1.37. In other words, we lost 83 pees. Do you want a rundown of how the games went? Then, read on...


Bury vs Southend - Prediction Away win


James Vaughan pulled one back with a 20th-minute penalty, but Ranger secured the first brace of his career after the break before Stephen McLaughlin's superb late strike condemned Bury to their seventh straight league defeat.


The Dons have not lost on their travels since the opening day of the campaign, while Oldham have still managed only one home league win all season.


Both sides created chances in an even first half, with Wimbledon keeper James Shea doing well to deny Billy McKay at his near post.


Wimbledon should have scored on 31 minutes, but Jake Reeves was kept out by ex-Motherwell goalie Connor Ripley's excellent save after breaking clear inside the box.


Oldham threatened again when Ryan McLaughlin crossed to ex-Motherwell striker Lee Erwin, whose downward header was beaten out by Shea.


Wimbledon's Tom Elliott glanced a header over the top before Shea parried a 25-yard blast by Ollie Banks.

Newport vs Carlisle - Prediction Away win


Josh Sheehan's early strike and a smart finish from Rhys Healey after a second half counter-attack secured the win for Graham Westley's side.

Crewe vs Plymouth - Prediction Away win


Alex Kiwomya gave Crewe an early lead, and Alex should have been further ahead but George Cooper's penalty was saved after David Fox fouled Jamie Jones, before he hit the bar a minute later.


Craig Tanner levelled just before half time with a curling right-footed shot. 
Graham Carey sealed the win by shooting home from 10 yards after a good low cross from Jake Jervis.

Hartlepool vs Cheltenham - Prediction Away win


Lewis Alessandra found space on the left side of the penalty area and his curling effort towards the far post was diverted in by visiting skipper Aaron Downes.


Hartlepool made the game safe after 80 minutes as Alessandra's free-kick was powerfully met by centre-half Matthew Bates.


Oh well, let’s move on and see what the good and powerful Grambler has conjured up for us this week.

Teaser time. Yay! Last week I asked you which football manager’s last game in charge saw ten goals being scored. It was, of course, Sir Alex Ferguson who watched his team draw five all with West Bromwich Albion. Not the best end to his managerial career but, look on the bright side, it gave us a good teaser.


One for this week? Let’s stick with football managers... an expression few club owners seem to use much. In the light of Gordon Strachan’s vote of confidence from the SFA, let’s stick specifically with Scotland managers. 22 men have held the post since the first appointment back in 1954. Can you name the manager who has had the longest uninterrupted spell in charge? One to start an argument down the pub.

And finally, Cyril? And finally Esther, following on from this week’s (g)ramble, I thought this photograph might intrigue you. 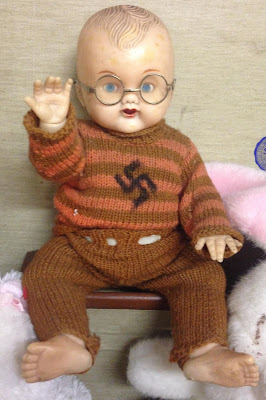 This doll was seen on sale at a market recently. Not quite sure why anyone would dream up such a toy but somebody, somewhere, did. It appears to be a doll of a spectacle-wearing baby, wearing a brown outfit (the brown shirt of the SA?) emblazened with a swastika, giving a Nazi salute. What is this effigy supposed to symbolise? The Hitler Youth? The age at which children were encouraged to join the Nazi party? I reckon it is meant to show us the lengths the medical profession in Nazi Germany would go to in the name of scientific research. How else do you explain it having a left arm where it’s right arm should be?