Week 16 - The Grambler on how to end global warming


The other week I happened to be in our local shopping centre, trying to find a shop that wasn’t boarded up, when a young man, well, teenager, thrust a leaflet into my hand. Perhaps it was a money-off voucher, or a flyer for a shop opening in one of the many vacant units. But no. There, on the front of the pamphlet, were the words ‘Get to know Jesus’. As I threw the leaflet into the nearest bin (which seemed to be filled with these flyers) I thought, what the hell is a fifteen year old kid doing handing these things out on a Sunday afternoon when he should be with his pals drinking Buckfast in a pedestrian underpass somewhere.


Later in the same week, I was collared by two teenage girls, one of whom (an American) asked me what made me happy. I replied that I enjoyed spending time with my family, I liked a good comedy show or film and I was always amused by the sight of a toothless person chewing a toffee. She then informed me, though I hadn’t asked, that she was happy to know that when she died she would be reunited with her family and Jesus. She then asked if I would like to talk about this. As I made my excuses to get away from these two strange young women, I noticed that each was wearing a name badge with their first name prefixed by the word ‘Sister’. I didn’t take any note of their actual names - they could have been Sledge or Matic for all I cared - I just wanted to get away from these two.


What has all this got to do with ending global warming, I hear you ask. Well, these encounters reminded me of a former meeting with a Bible-wielding nutte... person. I had had a tough morning on this particular day; maybe I had run out of milk for my breakfast cereal, I can’t recall. I just know that when I answered the door to a fellow tapping his Bible with the words ‘The world is in a terrible state, isn’t it’ I was not in any mood to discuss religion. ‘It is,’ I agreed, ‘but it’s not going to improve by talking to some beardy old man in the sky.’


‘And what would you suggest we do to improve it?’ he asked.


‘Do you want to know what I think? I think us humans should f*** off and leave the rest of the animals to live on this planet in peace!’


And that is how to end global warming... and get rid of people who knock on your door wanting to talk about Jesus.


Another thing you shouldn’t do lads is go to the toilet when you’re in the middle of cutting up chillies. [Ooh! Nasty. - Ed.]

I might have known. The very week I wish East Kilbride all the best and hope that their winning streak progresses, they lose their first game in yonks. Boo! Last Saturday they lost 1 nil to Spartans. This weekend they are away to Stranraer in the Scottish Cup. The bookies have odds of 9/2 for EK to win. Hmm... might be worth a wee flutter (there’s no law against, but don’t do it in view of the neighbours). Come on the Kilby!

Were any famous or notorious people born on the 26th of November? I think there might have been a few. Charles Forte 1908 (Greasy spoon caff owner.), Cyril Cusack 1910 (Ectaw. Like Richard Hearne, he was offered the role of Doctor Who back in the sixties.), Charles M. Shulz 1922 (Creator of ‘Peanuts’ cartoon strip. His favourite? That was the one where the kids are looking at the clouds and Linus says 'See that one cloud over there? It sort of looks like the profile of Thomas Eakins, the famous portrait painter. And that other group over there - that looks as though it could be a map of British Honduras. And then do you see that large group of clouds up there? I see the stoning of Stephen. Over to the side I can see the figure of the apostle Paul standing'. Then Lucy says, 'That's very good, Linus. It shows you have quite a good imagination. What do you see in the clouds , Charlie Brown?' And Charlie says, 'Well I was going to say I saw a ducky and a horsey but I've changed my mind.’), Robert Goulet 1933 (Zoe Ball’s dad.), Rich Little 1938 (Impressionist. Dubbed the voice of David Niven in 1983’s The Curse of the Pink Panther.), Anna Mae Bullock 1939 (Who? Of course you all know her as Tina Turner. Or ‘her with the legs’ as Arthur would have it. How about a clip? Here’s something from way back... All together now...  Ah ah ah ah ah ah ah ah ah...   That Ike looks a bad un. You want to watch him, Tina), John McVie 1945 (The ‘Mac’ in Fleetwood Mac. Another clip? Go on then... All together now...  Need someone's hand... John’s the one with the Fu Manchu moustache.), Hilary Benn 1953 (Tony’s lad. They must’ve wanted a girl. Imagine saddling a boy with a name like that.) and Natasha Bedingfield 1981 (Singer who obviously likes camping.)


QPR vs Norwich - Prediction Away win


Canaries left-back Martin Olsson saw red in the second minute for handling on the goalline but Tjaronn Chery sent the subsequent penalty wide.


Conor Washington gave the QPR the lead midway through the first half and Sebastian Polter added a second.


Steven Naismith pulled a goal back to set up a tense finale but the visitors slipped to a fourth consecutive defeat.


Dominic Samuel scored the opener midway through the first half, diverting a Roy Beerens shot home from close range.


The home side's lead was doubled a few minutes later when Danny Williams arrived at the far post to connect with a pinpoint cross from Jordan Obita.


A late own goal from John Brayford completed a poor afternoon for Burton.


A brilliant late save from David Martin helped managerless MK Dons take a point from a goalless League One game at Bristol Rovers.


The goalkeeper dived low to his right in the 88th minute to keep out a header from Jermaine Easter, which took a deflection and looked bound for the bottom corner.


Gillingham snatched the points on 84 minutes as Jay Emmanuel-Thomas drilled in a low 20-yard free-kick that took a nick off unwitting centre-half Max Ehmer.


Jamille Matt broke the deadlock on the half hour when he bundled Orient defender Yvan ‘Mr Bean’ Erichot off the ball, advanced towards goal down the left, then drilled his shot past goalkeeper Alex Cisak at the near post.


Blackpool doubled their lead on 58 minutes when defender Tom Aldred was left completely unmarked to head in a corner.


The home side looked dispirited until Paul McCallum's looping header with two minutes left offered them a lifeline, but the visitors were able to contain a late rally.

Well that was last week, what has The Grambler come up with this week?

Teaser time. Yay! Last week I asked you which football manager had the longrest uninterrupted spell in charge of the Scotland. It was none other than Hen, Joe, Maggie, Daphne and Horace’s dad Craig Brown who lasted almost eight years in the job between November 1993 and October 2001.


How about a wee teaser for this week? As there have been Champions League games week, I thought a European Cup question might be in keeping. Which Scottish side was one of the losing semi-finalists in the very first European Cup back in 1956? One to ask them down the pub.

And finally, Cyril? And finally Esther, anyone who has ever supported a reasonably well-known football team will be aware that something every club does rather well is find ever-more inventive ways to extract money from the fans. You can get home tops, away tops, vintage tops, scarves, hats, coats, gloves, even underwear. This Christmas all the English Premiershit clubs have another way to make the ardent supporter part with his or her cash - the club Christmas jumper. Yes, be the envy of absolutely no-one this year by sporting a wacky Christmas jumper in your own team’s colours. Most of the knitwear on offer seems to have been produced by a single supplier which has taken a basic design - a jumper that has pretend buttons and a belt to make it look like an elf type jacket - in each club’s particular colours. Some are a bit more original in thought. It is nice to see that it is the less flamboyant clubs have the best designs. The Daily Mirror even conducted its own little survey. And the winner is... 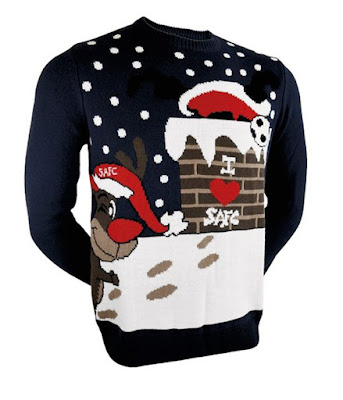 Sunderland! Yay! They may struggle in the Premiershit season after season but they are top of the league in the season to be jolly. Do you see what I did there?