Week 45 - The Grambler and a sex change

There was an article on the news last week concerning a legal case in the high court.  When I say say high court, I mean the highest (and probably most expensive) court in Britain.  This is the place where high profile murder cases and the like get heard.   All the really important, serious trials take place there.


The case I am referring to?  Someone who has had a sex change wants to be able to put gender neutral on their passport instead of male or female.  Sorry pardon excuse me?  That, to me, is the sort of matter that shouldn't go anywhere near a court.  When this person went to a lawyer to ask for a change to the law regarding passports, he/she/it should have been sent packing.  Not surprisingly, a lawyer was quite willing to take on his/her/its case. Who can blame them when there's money to be made?


Also, not surprisingly, the request for a change to the law was thrown out of court.


I don't understand what the person who challenged the law was thinking. If he/she/it has had a sex change, the passport which used to say male would now say female.  You’ve had a sex change. There are two genders.  So, if you were a man and have had ‘surgery’, you are now a woman.  Isn’t that how it works? Apparently, changing that part of a passport is acceptable, though not too easy in practice.  The point is, it can be done. So why the request for a middle sex?  Maybe the sex change operation was botched so badly that it is no longer possible to ascertain what sex someone is meant to be.


On first hearing about the case, I thought that it perhaps concerned someone whose sex could not be determined at birth or a hermaphrodite.  But no, this was someone who had decided that they wanted to be the opposite sex to the one they were at birth.


He/she/it claims that by not being allowed to put gender neutral on their passport, they are being discriminated against.  Yeah, sure.  Well, he/she/it, why would putting an X on your passport, rather than male or female make the slightest bit of difference?


And what does X mean, exactly?  It?  Surely, that is just a way to draw even more attention to yourself. (Don't call me Shirley.)  To me, this whole charade seems very much to be about somebody who wants to do just that... ‘Look at me everyone, I’m different.’


The person who wanted to take the matter to court complains about discrimination.  Listen mate, anyone who is different in any way suffers discrimination.  Nothing will ever change that.  I recall a play about this subject from years ago which was called something like 'If there weren't any blacks, you'd have to invent them'.


Not a particularly politically correct title, admittedly, but it made a sensible point: there are people who just have to be prejudiced; it doesn’t matter who or what they discriminate against, they will always find someone to bully.


By drawing attention to him/her/itself, the person who has brought the matter to court is just setting themselves up perfectly.

Were any famous or notorious people born on the 30th of June? Of course, here are some I’ve even heard of. John Gay 1685 (Happy playwright.), Archibald Frazer-Nash 1889 (Car manufacturer.), Stanley Spencer 1891 (Odd painter. His paintings weren’t particularly odd, but his lifestyle certainly was.), Susan Hayward 1917 (Actress.), Lena Horne 1917 (Singer. A clip? Why soitenly. Here is a song which was a little bit risque in its day.), Mike Smith 1933 (Crickety bloke.), Tony Hatch aka Fred Nightingale aka Mark Anthony (Musician and composer. Soap opera fans will recognise this one and this even older one.), Barry Hines 1939 (Orfer. Wrote A Kestrel for a Knave which he adapted for the Ken Loach film Kes.), Florence Ballard 1943 (A Supreme... It doesn’t say a supreme what, so I can’t help you there. Another clip? Here she is baby babying along to Diana Ross with another of her gravity defying wigs.), Andy Scott 1949 (A bit of Sweet. Have another clip. Here he is in a rather fetching hat.), Stanley Clarke 1951 (A bit of Return to Forever. Another clip, vicar? Have a bit of jehhhzzz fusion.), Esa-Pekka Salonen 1958 (Conductor and composer. Here he is conducting his own piece, Nyx.), Jack McConnell 1960 (Third First minister of Scotland. [Sorry pardon excuse me? - Ed.]), Clive Nolan 1961 (Musician. Here he is on keyboard duties with Pendragon in a bit of prog.), Julianne Regan 1962 (Singer with All About Eve. Here is their most famous toon, Martha's Harbour.), Rupert Graves 1963 (Ectaw.), Yngwie Malmsteen 1963 (Geetarist. Here he is giving it laldy far beyond the sun.), Gary Pallister 1965 (Footy bloke.), Mike Tyson 1966 (Ear muncher.), Ralf Schumacher 1975 (Racey car bloke. Not as famous as his brother.), Katherine Ryan 1983 (Comedian.) and Michael Phelps 1985 (Swimmy bloke.). 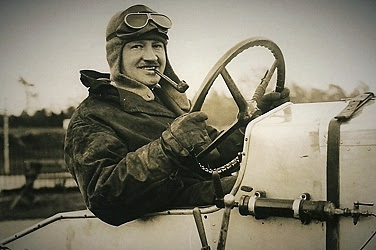 Archie Frazer-Nash at the wheel of his
racing car... Can't imagine Lewis Hamilton
storming round the Nurburgring with a
pipe stuck in his gob.


Thank you for the link to a Supremes song. We thoroughly enjoyed it. However, we recall Phil Collins doing a cover version of one of their biggest hits, but can’t remember which one. Can you help?

Let’s move onto grambling matters. How did last week’s bet fare? We got a return of just 70 pees as only two of The Grambler’s predictions were right. Do you know what? I’m not even going to suggest a footy bet this week; I’m actually going to demand that The Grambler predicts some gee gee results.


What has he/she/it come up with?


The selections have been made. The bets have been placed (10 x 20 pee doubles plus 1 x 20 pee each way accumulator) and if they all go according to The Grambler’s Prediction, the Bobby Moore Fund stands to receive a whopping...

Hmm... even more whopping than the amount we didn’t win a fortnight ago.


Teaser time. Yay! Last week I asked you which World Cup team (other than England) boasts the most English Premiershit players in its squad. The answer was, of course, Belgium with eleven. They are... deep breath... De Bruyne, Hazard, Courtois, Lukaku, Alderweireld, Kompany, Vertonghen, Dembele, Fellaini, Mignolet and Chadli.


Okay, one for this week.  Harry Kane’s hat trick (if you can call two penalties and a fluke, a hat trick) against Panama this week takes his total of goals scored for his country to 18.  One or two other Tottenham Hotspur players have tucked away a few goals in the past. Kane’s total is pretty good, you might think, but he is way behind the 28 England goals of... which Spurs player?  One to start a discussion down the pub, I think.

And finally, Cyril? And finally, Esther, I am indebted to a Ms K. Ryan, a Canadian comedian who now lives in Britain. It has been said that, though she is Canadian, her humour is very British. See what you think as we finish this week’s (g)ramble with some examples of her wit.


Nobody starts something hoping it will fail – maybe a suicide bombing?


Would you trade you life with a teenage girl’s life? Do you remember what it was like when we had no power, no money, and when we did our own eyebrows? No thank you!


I think I’m a nice girl but my comedy has been described as kind of nasty. They say I’m Joan Rivers but older, and that hurts!


You know that guy who got done for taking a 15-year-old to Paris? Anyone who’s been on holiday with a teenager knows that man deserved a medal, not prison.


Joan Rivers got exactly what she wanted from that final surgery – to stop ageing. Finally she nailed it.


My name is TV’s Katherine Ryan. I used to be an unwelcome surprise on a mixed bill, now I can see that at least a third of you have come to see me on purpose.


I’ve lived in England now for 10 years with my lovely daughter. I love having a British child. It’s like having a tiny and ineffective butler at home.


On what scares her... Primark on a Saturday. The biting and the blood.


On her daughter’s father... He’s a man I loved once. He will always be her dad. I can’t change that – I tried!


On Jurassic Park... The dinosaurs are killing everyone! Why do we keep reopening this park? Who keeps giving us public liability insurance?!


People worry about you when you’re single and a woman. I get letters about being single and a woman. I got a letter from a lady who was very concerned, she said, ‘Katherine we saw you on tour and we’re very concerned that you are single. My brother Ray is also single’. Why am I getting this? Guys don’t get this. Leonardo DiCaprio is mysterious and exciting because he’s single. I bet he doesn’t get letters, ‘My brother Ray is also single!’


I’m just like you. A typical British mum. A young uneducated immigrant. Oh no, my daughter was planned… poorly, so poorly.


On Donald Trump... America deserves him as a president.