You may recall that a couple of weeks ago I mentioned I was resurrecting the gramblerplan diet (the diet that really works) to try and shed a few flabby pounds that I had gained on a recent holiday.


You may be wondering how I am progressing. Oh, you’re not. Well, I’m going to tell you anyway. The answer is... not too well. It was going fine until last Friday and then... oh dear.


You see, on Friday I was going out for the evening. Sorry? Where to? I was going to a rum tasting, if you must know. More of that later.


En route, I decided to stop for something to eat and visited a favourite haunt of mine, Wetherspoons. Good old Wetherspoons. Good food and drink at reasonable prices (I’m not getting paid to advertise this, incidentally, although if anyone from Wetherspoons is reading this...). One good thing about the menu is that all meals have their calorific value shown, so that those, like me, who are on a healthy eating regime can choose the healthy option. Did I do this? Did I fu... No I didn’t. Haggis, neeps and tatties wins hands down... Oh, I’m dribbling... and its calory content is fairly hefty.


No matter, thinks I, it’s only a minor blip. Unfortunately, I followed my meal with a coffee and cake. Oh dear.


Well, at least the rum tasting wouldn’t hurt the diet. Not many calories in a few small rums with a drop of lemonade. There are plenty of calories in bread, cheese, ham and crisps, though. These were the ‘nibbles’ provided at the rum tasting. Well, it would be rude to refuse an offer of food, wouldn’t it. Wouldn’t it?


Saturday dawned and I was determined that I would behave myself and eat sensibly. This I did. I ate a small breakfast and a very light lunch. I had forgotten, however, that I was visiting people for an evening meal.


Have you ever heard of people being described as feeders? Whenever you visit them, you barely have time for your bottom to hit the couch and you are being presented with biscuits/cake/sandwiches (delete as applicable) and tea/coffee/large whisky (ditto). The people I visited on Saturday were definitely feeders. There were already ‘nibbles’ on the coffee table when Mrs G and I arrived and I hadn’t even parked my backside when a large glass of prosecco was stuck in my hand.


It was one of those evenings where the drink flowed freely and the food was plentiful...


Then there was the dessert...


And so the evening went on. More drink. More nibbles. By the time I got to bed, I really did feel absolutely stuffed.


Sunday was weigh-in day. Guess what. I didn’t lose weight. [There’s a surprise. - Ed.] I had gained exactly one pound. Considering the amount of food and drink I had consumed over the previous two days, that was actually not a bad result.


It was an even better result for the Bobby Moore Fund. Remember, for every pound in weight that I lose, I donate one pound to the fund, but if I put weight on, two quids per pound go to the fund.


I really should have a bit more willpower; this could prove costly otherwise.


We have always been fans of The Move and wonder if you know the answer to a little teaser. When the BBC started Radio One in 1967, a song by The Move was the very first record played. Can you remember which one?

Let’s move onto grambling matters. How did last week’s bet go? Er... not too well. We didn’t lose... not entirely. 62 pees back from a £2.20 stake isn’t exactly an unqualified success though. What happened? Read on...


Inverness Caledonian Thistle missed a penalty as they were held to a draw by 10-man Ayr United in the Championship.


Daniel Harvie was sent off for a second booking after his foul on George Oakley resulted in a spot-kick but Liam Polworth shot wide from 12 yards. Pillock!


Michael Rose's header for the visitors forced Mark Ridgers into a save and Lawrence Shankland also threatened.


The Ayr striker's shot ran across the face of goal and wide.


Inverness defender Coll Donaldson had a long-range effort from 30 yards late on but it went narrowly over. Prat!


On 24 minutes, Partick’s James Penrice cut in from the left, beating two defenders, before firing a deflected shot into the Bairns net.


Chris Erskine doubled Thistle's lead before the interval, breaking infield from the opposite flank.


Falkirk were better in the second half, Andrew Irving striking the crossbar before Rees Greenwood's consolation goal. 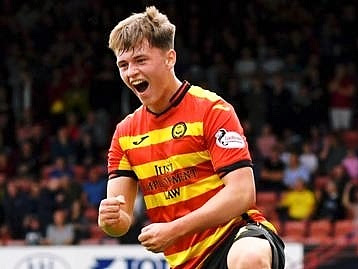 James Penrice celebrates his goal with
a rendition of Me Old Bamboo from
Chitty Chitty Bang Bang...
although it would appear that someone
has half-inched his old bamboo.  Would
you Adam-and-Eve it?


Match report? Come off it. This is a Scottish First Division game, for goodness sake. Who’d be interested? After all, it’s only a game between two teams in the third tier of Scottish football. Obviously, the Beeb wouldn’t consider that important enough to provide us with a match report. It’s not as if it was the game between Havant & Waterlooville and AFC Fylde, which the Beeb did fn well cover. [I’m sensing a touch of sarcasm. - Ed.]

Ho hum. Not a great week for The Grambler. What has he/she/it predicted for us this week?

Teaser time. Yay! Last week I asked you which team has had the worst all-time total goal difference since the Premiershit began. The answer was that yo-yo team Sunderland with minus 292 goals (612 for, 904 against). Not too impressive.


One for this week? How about this? Free-scoring Harry Kane didn’t score last weekend, but against which Premiershit side has he scored the most times? Hmm... One to ask down the pub, I reckon.


And finally, Cyril? And finally, Esther, as I write this I have just heard that Aretha Franklin aka the Queen of Soul has died. There’s a thing... Why was she called the queen of soul, but James Brown, the male equvalent, if you like, was only the godfather of soul? Why not king of soul? Or, conversely, why wasn’t Aretha simply a godmother of soul? Nah... Sounds daft. Any road up, another great singer bites the dust. She was always more successful in the States than in the UK, racking up 16 US solo top ten singles and only achieving three in Britain. Respect reached number 10 back in 1967 and I Say a Little Prayer reached number 4 the following year. She had to wait another 26 years before she had another solo top tenner with this, our finishing clip, A Deeper Love which, as you can see from the promotional video, was on the soundtrack of Sister Act 2: Back in the Habit (Oh how we laughed.).


Incidentally, that song never troubled the top ten in the US.