Week 10 They call me The Grambler

Howdy doody all you gramblers out there.  Is anyone trying to cultivate some hirsute topiary this month?  Just me then.  Yes I’m talking about Movember, Mo grow, or whatever you want to call this month of growing moustaches.  Actually, I know of a few others who are giving it a grow.  Fellow Well supporter Ian from East Kilbeard, Tony from Manchesthair and Alasdair from Whiteshaven – Oh, hang on; he’s already got one.  Well, he could grow another one.  Somewhere else.


So, how is my attempt at a tache going?  Well, Jimmy Edwards it ain’t (ask your dad).  At the moment it is more…Catweazle (ask your dad).  Actually, it’s worse than that; nobody has even noticed that I am trying to grow it!


Back to some serious grambling.  Did you all visit http://www.nhslanarkshire.org.uk/news/news/Pages/HairmyresITU.aspx last week?  I hope so.  It is important to get the message across.  May I also give you another link that I hope you will visit regularly.  It’s another page set up by Stewart’s wife which will give you information about all the fundraising she and Stewart’s family are planning over the next year.  Go to https://www.facebook.com/kickcancerfund .


Anyway, let’s make a start on this week’s predictions with a little toon from Dion and the Belmonts…


What’s that susposed to be?  Hardly in keeping, is it?  A song about promiscy…promiscu…manking about, unprotected intercom…interpol…sex (There, I’ve said it) and abandon ship…ment!  I meant ment.  Goodness knows how many little nippers were spawned after would-be Casablancas heard that song and thought it was all right to go spreading their manure…wild oats…I mean wild oats!  No wonder this world’s in the state it’s in.  That Celine Dion and the Bellends have got a lot to answer for.  This is susposed to be an blog about raising awareness of bowel cancer in young people.  It is susposed to get you lot…what are you called?  Readers!  It is susposed to encourage you to give lots of money to the Bobby Moore fund.  Ooh, I liked him.  Deferably the best Bond.  Some people think that other one…the bald one that talks funny…Sinead O’Connor!  Him.  They think he was the best Double O Gauge, or that Pierce Morgan, but I deferably think Bobby Moore was the best.  Ooh, what was that film?  It was really good.  The one about the cat with eight legs….etc. etc. ad infinitum.


We have a bit of a dilemma this week as to which games should be eligible for this weekend’s Grambler predictions.  It is the first round of the FA Cup in so that kind of cuts out the lower English leagues for us.  Sticking with the rule that all games must take place at on Saturday 9th of November we can choose from purely senior league games which means there are only 33 matches for The Grambler to consider – more than half of them from the Scottish leagues.  Or, we could include all the FA Cup games as well which would give us 66 to choose from.  Yep, 33 games on Saturday are devoted to the first round of the FA Cup.  I am thinking that the first figure of 33 league games is too few, especially with the Scottish bias.  66, on the other hand, could be okay but (yes there is a but), this being the first round there are lots of games between clubs which many of you out there in Gramblerland have never even heard of.  Would you really be interested in seeing whether Stourbridge can beat Biggleswade?  Or whether can see off Devon Athletic?  I suspect that you couldn’t give a monkey’s.


Thus, we are selecting from the much more manageable, and less Scottish biased, total of 46.  So, sadly, no or Brackley.


For The Grambler’s first prediction we go to home of the Rams who welcome the Owls for this Championship (Division 2!!!) game.  The Rams have been having a pretty good season so far sitting in 11th place at the moment.  The Owls on the other hand are struggling a bit and are 10 places lower in the division.  So the obvious choice in this game is to win, surely.  But The Grambler sees things differently [always does – Ed] and thinks Wednesday might pick up a point.  He/she/it could have a point [The Grambler gets a point as well? – Ed] as County lost last Saturday to QPR.  Perhaps no surprise as QPR currently sit third in the table.  But hold on there.  The Owls actually won a game last Saturday [And? – Ed] and that was against – currently sitting 5th.  It should also be noted that last season’s meetings between the two ended as draws.  Another draw?  Possible.


For our second game we head slightly south to ’s King Power Stadium [king stupid name – Ed] where they play host to .  are doing very well indeed, sitting 2nd in the Championship (see above!!!).  are also doing pretty well and are currently in 6th spot.  However, the wheels seem to have come off the bogey for recently, taking only 1 point from the most recent three games.  So, on current form, The Foxes should be taking all the points.  Once again, The Grambler sees things differently and predicts a draw.  This could be down to the fact that in the past 6 meetings between the teams, 4 have ended as draws.  So, is The Grambler on to something?  Or just wrong as usual.


Before we move on, I think we have a cracking name of the week.  Step forward defender Zoumana Bakayogo.  Brill.


Motherwell link: Billy Davies, ’s manager used to play for and manage the Mighty ‘Well.  I told you that last time came up.  Oh, did I tell you he was a very good friend of Tommy Sheridan? [You did mention it – Ed].


Third match of this week’s predictions takes us to , Forfar where the Loons play host to the Hedgemen.  It is the second meeting of these teams this season.  Brechin won that one 2-1, so maybe The Grambler, with a prediction of another win for Brechin, has called this one correctly.  Ah, you say, Forfar won the previous game.  Ah, I say, but Brechin won the previous two.  So there!  Go Grambler, go Grambler.


Time for a little explanation.  The name the Loons comes from a northern Scots word for young man.  It comes from the days when supporters also went to see reserve teams, which featured younger players, hence going to see the ‘loons’.  Isn’t that interesting? [No – Ed].  Also Brechin isn’t a city [Oh shut up – Ed].


For the second week running The Grambler has chosen to give us stale meat.  Old ham.  Do you see?  Yes, the Latics this week play host to Wolves.  Like last week The Grambler predicts the Latics will lose. This is a first round FA Cup match, although both sides play in League 1 (Division 3!!!).  If we go by table positions – Wolves are 2nd and are 17th – this prediction should be spot on.  However, cup matches can throw up some surprises.  spoiled The Grambler’s prediction last week – please don’t do it again.


And finally, Cyril?  And finally, Esther, we go to where the Boro play host to an old favourite of ours, Pompey.  Again this is a cup match so , playing in a division higher than , are expected to win.  But it is a cup match and things can always turn out differently to the way they might do in other circumstances.  I’m sticking up for you now Grambler, because you reckon a draw will be the outcome of this one.  I think a draw is a possibility.  They have only met three times before and honours are even [Eh? – Ed] with one win each and one draw [Oh, I see – Ed].  The last meeting ended nil – nil; who’s to say this won’t end the same way [Probably everyone but you and The Grambler – Ed].
Motherwell link: Porstsmouth defender Yassin Moutaouakil played for...etc. etc.


So there you have it fellow gramblers, five predictions which, if they all come up, gives us odds of 248/1 so that my 20 pee bet will give us a return of nearly 45 quids.


Ah, but we are poltroons here in Gramblerland and always do a cowardly doubles bet so that if more than one result is correct, there is at least some return.  If three results come up we might actually be in profit.  Four; even better.  And if we get the magic five, well ten 20 pee doubles would net us just over 18 quids.


So go to it all you gramblers out there.  Let’s see if we can give the bookies a doing this week and donate all that lovely dosh to the Grambler’s Kick Cancer’s Arse Fund.


To finish.  Here is a picture of a cool duck. 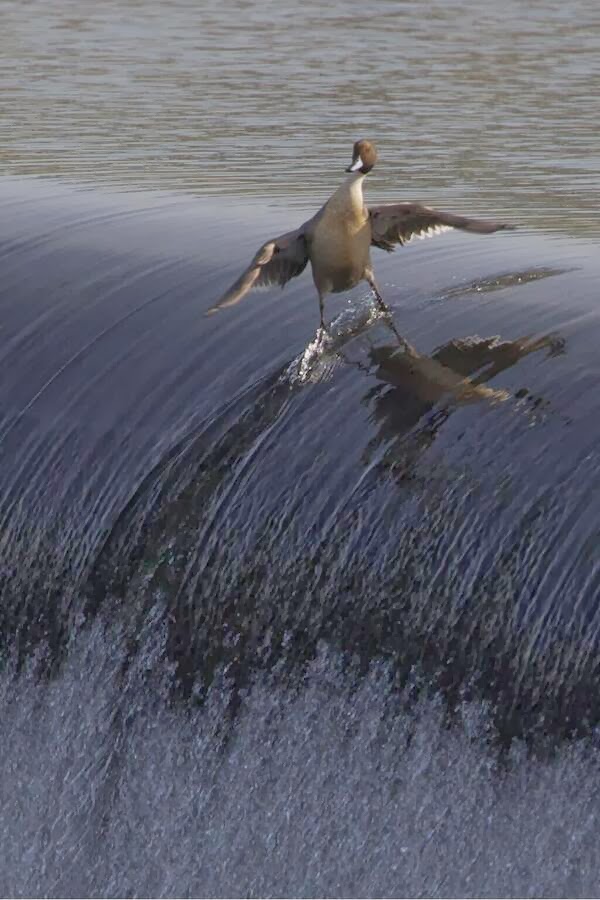