*Please be aware that this is written to, hopefully, amuse. I am not advocating violence towards old ladies who happen to have jingly accoutrements on their bags.  Well, not much anyway.

Right.  Now that’s off my chest, how about a little toon.  Take it away, .

That was a gramblerised version of Roy Orbison’s ‘Crying’.  He died 25 years ago this week.  Doesn’t seem that long ago we lost the Big O.

Ooh, we’re being all blibbing morbid again are we.  Just as well you explained what the song was about.  ‘Grambling over you’?  It looked like an euphoniumism for something very unsavioury.  And messy with it.  I always thought it was that Don…what’s his name?  Toothpaste.  Him.  I always thought it was him that sung that song.  The bloke that sang about the pie.  And what’s The Biggles got to do with it?  They never did that one.  They did that one about an video killing some bloke off of the radio.  Them videos back in the 80s were the size of a sideboard.  If one of them dropped on your head you’d be a goner, that’s for sure.  I’m not surprised it killed him.  I thought Roy Ormanton did that one that was used in that film about an proslitute.  That Richard Hammond was in it… Gere…I meant gere.  I’m getting him mixed up with the little one off that Top of the Gears programme.  Pretty Woman it was called.  He was in it with that…Ooh, what’s her name?  Her with the mouth.  Pretty?  Her?  With that mouth!  I’ve never seen a cakehole like it!  You could get an whole wagon-wheel in that gob. For all our readers out there in foreign land an wagon-wheel is a round chocolate biscuit that is circular and is about 6 inches across in diameter. In fact, her mouth’s that big you could get an real wagon-wheel in there…etc. etc. ad infinitum.

Well now, how many games have we got for The Grambler to select from this Saturday the 7th of December at 3pm?  If we take league games only then we have only 38 to choose from and over half of them are from the Scottish leagues.  Yes, it is FA Cup weekend again.  It doesn’t half fmuck up the fixtures.  Anyway, if you remember the last time this happened we also included those FA Cup matches which featured teams from the senior leagues to avoid the Scottish bias.  This time we will do the same.  So our total goes up to 49.  Still not many, I am sure you will agree, but remember The Grambler only predicts from 3pm Saturday games, so we don’t include the 9 other matches taking place at various days and times over the weekend.


Anyway, I have just been handed The Grambler’s predictions.  Thank you Arthur.  What can I say?  Well, so much for adding those FA Cup games; The Grambler randomly ignored them altogether so we still have a Scottish bias – three games from the Scottish leagues and two from the English.  Let’s take a look at what he/she/it has randomly chosen for us this week.  Hmm.  After last week’s debacle (That’s a good word; must look it up.) The Grambler has played it somewhat safer; on a couple of the games anyway.  The others?  Hmm.


For our first prediction The Grambler has given us the Trotters and the Rovers at the Reebok Stadium.  The Grambler agrees with the bookies on this one.  And why not?  The two teams are only three places apart at 15th and 18th and only one point separates them.  Rovers are having a fair spell losing only once in the past five.  The Trotters, if you remember, had the worst start to any season ever, but managed to get a fair run of form going at the end of September and remained unbeaten until last Saturday’s defeat at the hands of Middlesbrough.  Then they lost again on Tuesday.  I hope, for The Grambler’s sake, they haven’t hit the buffers again.


Trivia: Bolton Wanderers were originally called Christ Church FC, founded in 1874 by the Reverand Thomas Ogden and the club was run from the church of the same name. They changed the name to Bolton Wanderers in 1877 and moved after falling out with the vicar.  Isn’t that interesting? [You know my answer to that – Ed]


For our second game The Grambler takes us to Elland Road where United play host to yes it’s the club with the crazy nickname, the Hornets.  Remember?  Moose on emblem so they are called the Hornets.  Barmy, I calls it.  Any road up, for this game The Grambler has chosen an away win.  If this had come up earlier in the season, I’d have said sure, no problem.  Watford got off to a flier at the start of the season losing only once in their first ten games.  Then the rot set in.  They haven’t won a game in two whole months.  Leeds, on the other hand, are on the up having won four of their last five matches.  I think The Grambler may well have called this one wrong.


Do we care?  No.  Nyron Nosworthy plays for Watford, which gives us an excuse to hear…they tried to put the ball past Nyron


Where to next?  Off to MacDiarmid Park in Perth where the Saints play host to the Dons.  For this game The Grambler has predicted another away win.  Again, if this had been earlier in the season I would have agreed; Aberdeen were flying high vying for second spot.  It might be too early to say the wheels have come off the bogey, but they have lost their last two league games.  The Saints, on the other hand, are improving as the weeks go on winning three of their last four.  Only two points separate the two clubs so this is a ‘six-pointer’; both will be wanting the points.  Has The Grambler called this one right?  Maybe, maybe.


Motherwell link: Aberdeen defender Mark Reynolds was another Motherwell boy, starting his career there and making 166 appearances between 2005 and 2011.


St Johnstone’s most famous supporter is probably Fred MacAuley who tells a great story about a fan sitting near him whose utterance when a decision went against his team was (I apologise for the sweary) ‘Fucking…BOO!’  As Fred remarked, ‘Sometimes ‘boo’ just isn’t enough.’


On to game number four and we are off to Gayfield Park where the Smokies play host to the Blues (wonder what colour strip they wear).  The Grambler in his/her/its wisdom has called this one as a draw.  Stranraer currently have 23 points; Arbroath a measly 13.  However, Stranraer was one of the few teams that Arbroath have managed to beat this season.  Can they take a point off them again?  The Grambler says yes; I say no.


And finally, Cyril?  And finally Esther we are off to the picturesque town of Cumbernauld to Broadwood Stadium where the Bully Wee (I don’t know what it means either) play host to the Blue Toon (wonder what colour their strip is).  The Grambler reckons that Peterhead will take all the points.  Hmm.  Clyde are currently sitting pretty at the top of the table; Peterhead are in third spot with only three fewer points.  The last meeting between the two up at Peterhead was a 1-1 draw.  The previous two encounters went the way of the home side.  We know that, on their day, Peterhead are a free scoring side; Clyde tend to score fewer goals but manage to grind out the wins – they are currently unbeaten in 7.  Has The Grambler called this one right?  Maybe.

So there we have it my grambling chums.  Five predictions from The Grambler.  Surely, we must improve on last week’s total ballsup.  The bet is on – one 20 pee accumulator [last of the big spenders – Ed] and ten 20 pee doubles.  Thus if every game goes as predicted by The Grambler the Bobby Moore Fund (http://bobbymoorefund.cancerresearchuk.org) will receive the grand sum of

Let’s finish with a joke:


Quasimodo goes into a bar and the barman asks what he wants to drink.  Quasi points to his favourite whisky and says, ‘The Bells!’ 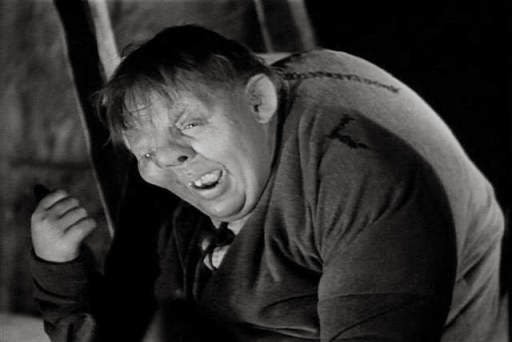