Week 13 results - I knew this would happen

Let’s get back to The Grambler;  How did the predictions go this week?

What did I tell you?  Worst predictions yet, I said.  What happened?  Every prediction completely and utterly wrong.  I do apologise to all you good people out there in Gramblerland.  There is no excuse.  The Grambler fmucked up again.  I blame the drink.  Where did it all go wrong?  Read on…


Result – 0 Brentford 1
Well, would you believe it? Bottom of the league couldn’t beat 4th placed Brentford Nylons.  What a surprise (he exclaimed with not a little sarcasm)!
Striker Will Grigg was on target as high-flying Brentford overcame plucky – I love that word - in League One. That’s League three in old money.
Bees/Nylons plucky keeper David Button made a plucky triple save inside four minutes, denying Jack Grealish, Danny Haynes and Jamal Campbell-Ryce; plucky lads all three.
Plucky Gary Liddle also had an effort pluckily cleared off the line by plucky Clayton Donaldson.
Campbell-Ryce then blasted a golden chance over the bar before plucky Grigg converted the Bees/Nylons' first shot on goal before the break for the winner.
It left new boss Shaun Derry feeling not so plucky and still looking for his first win since taking over at .


Well, would you believe it, 23rd placed couldn’t beat 3rd placed Preston North End.  What a surprise.
recorded their first home league win since September against managerless in a heated match that ended with two red cards.
's Kevin Davies nodded across goal for Jack King (Hur hur.  Jacking.  Hur hur) to head home his first goal of the season.
The visitors came closest to equalising from a wide Simon Gillett shot and a close-range Aden Flint header.
Both sides finished with 10 men when Karleigh [Wasn’t that a hit for Marillion?- Ed] Osborne and Paul Gallagher were dismissed for scuffling late on.


Well, would you believe it, 21st placed couldn’t beat 13th placed .  What a surprise.
Tom Eaves marked his return to with a goal as they secured a win at lowly, not plucky, .
Francois Zoko tapped in to put the home side ahead before Adam Reach lifted an equaliser over the keeper.
On-loan striker Eaves, who only signed for the Shrews on Tuesday nodded home Paul Parry's cross to put Shrews 2 up.
Joe Jacobson then sealed the points before half time as he headed home Darren Jones's cross.


Well, would you believe it, 22nd placed Bristol Rovers couldn’t beat 12th placed Wim….Hang on.  They not only didn’t draw as predicted by The Grambler, but they actually won.  Convincingly.
Bristol Rovers continued their improvement in league form with a convincing victory over AFC Wimbledon.
David Clarkson (Yay – ex-Motherwell, you see) put Rovers, who have lost once in six games, ahead as he volleyed in from the corner of the box.
Tom Parkes doubled the lead with a powerful header after hesitation from visiting keeper Ross Worner.
's Sammy Moore was sent off for a second yellow card before Matt Harrold hammered home a penalty after Ellis Harrison was fouled.


Well, would you believe it?  Torquay, now bottom of the table,  couldn’t take a point from 4th (up from 6th) placed .
caretaker manager Russ Wilcox sealed his third win in three against struggling Torquay. That’s not three wins against Torquay; the third of his wins was against Torquay.
Sam Winnall scored his ninth of the season early on when he turned on the edge of the six-yard box to rifle home.
Torquay's Anthony O'Connor headed into his own net to double the Iron's lead before Hakeeb Adelakun struck a third.
The visitors found it difficult to trouble the home side but did manage a consolation when John Marquis' shot inched past goalkeeper Mrs. Slocombe, whose pussy was almost crushed as she fell on top of it. [Look you know Mrs Slocombe isn’t in goal and her pussy wasn’t harmed in any way.  Just report the facts, please.  Besides how many of our Chinese or Ukrainian readers will even spot a reference to that hilarious British sitcom from the 1970s, Are You Being Served? – Ed].  Sorry, the goalie’s name is Sam Slocombe and he hasn’t got a pussy.
The win sees rise to fourth in the table, one point off top spot, whilst Torquay now lie bottom of League Two.

I wonder if the squirrel-costumed Scunthorpe supporters had anything to do with the Seagulls' collapse. 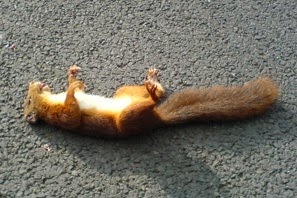 There you have it fellow gramblers; five predictions, five wrong.  So, once again, the Bobby Moore Fund benefits by only the stake money.  But, as I said last week there is nothing stopping you from making your own donation to the fund if you feel like it. All you have to do is go to http://www.justgiving.com/Geraldine-Smith3 and make that donation.  And, again as I said last week, even if you don’t want to make a donation, it is worth going to just to read the story of Stewart David Smith - the founder of the wonderful blog that is The Grambler - who lost his life to bowel cancer on August the 29th this year.  You can also keep up to date with all the fundraising activities by going to https://www.facebook.com/kickcancerfund .

To finish, I did say that week’s poor showing was but a blip.  Well, you can get more than one blip, can’t you?  The Grambler will pick those five correct results one day.  I’m sure of it.  Don’t despair my little grambling chums.  Keep the faith.  It will happen.  I keep telling myself that.  I don’t believe myself, but I keep telling myself, anyway.