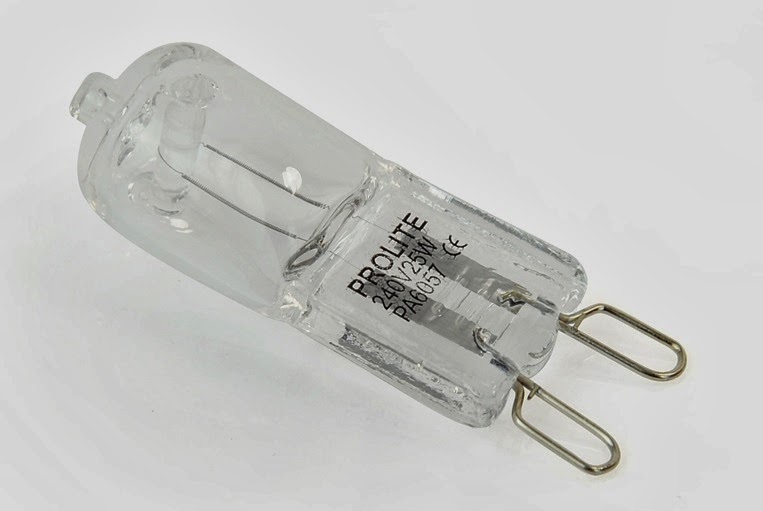 Can I start with another grumble?  Lightbulbs.  I am not sure how things are in the rest of the world, but here in bonnie we can no longer buy the good old-fashioned lightbulb; the one that is actually bulb-shaped and came in various wattages such as 40, 60 and 100.  A couple or few years back we were instructed to instead use energy-saving long-life bulbs usually about one quarter of the wattage of the old bulbous bulbs.  And as they are long-life, they last a long time [Really? – Ed].  They are like tiny versions of the fluorescent tubes used in shops, factories, kitchens etc.  With me so far?


Now, if I were a lightbulb manufacturer, I would be a bit miffed about that.  After all, my livelihood depends on bulbs being short-life so that people would regularly have to buy replacements.  Still with me?


Also, if I were a provider of electricity, I too would be miffed.  Instead of people burning 100 watts of energy, they would be burning a mere 22 watts.  My profits would be down.


Well, fear not, anyone who is worried about the plight of lightbulb manufacturers and providers of electricity [nobody, surely – Ed]; a solution has been found which actually generates much income for both lightbulb and energy supplier.


How can this be?  I hear you ask.  Yes, instead of the old, cheap, energy burning bulb-shaped lightbulbs there is a brand new, expensive, energy burning lightbulb.  Behold the G9 25 watt halogen bulb.  The saviour of lightbulb manufacturers and energy suppliers.  Huzzah!


Yes, this wonder bulb is the answer to their prayers.  You see, whereas the long-life bulbs of 22 watts provided as much light as an old 100 watt bulb, these new kiddies on the block are 25 watts each and provide barely enough light to prevent somebody who might be incredibly clumsy from clouting their shin on a strategically placed coffee table.  Why an incredibly clumsy person’s wife has to rearrange furniture without telling the incredibly clumsy person, I do not know.  Nor do I know why the wife of the aforementioned incredibly clumsy person responds to his yelps of pain with a cry of, ‘Open your eyes you clumsy so-and-so.’  It was bloody sore let me tell you.


Ahem, any road up, the point I wish to make is that these miniature bulbs give off very little light when used singly.  Our living room used to be lit by two 100 watt bulbs and a 60 watt lamp.  When we moved to energy savers we required two 22 watt bulbs and a 12 watt lamp.  Thus, 260 watts of energy was reduced in one swell foop to…erm…44 plus 12 is…erm…56 watts.  Less than a quarter!  Woo hoo!  What a saving!


Sadly, for my wallet, fashions change.  Mrs Grambler just happened one day to be looking in a light shop.  That is a shop that sells lights not a shop that weighed very little.   Sorry, that was obvious, I know.  ‘Ooh, they’re nice,’ says she, and so my wallet was lightened in an instant as we purchased a selection of lamps that used the said G9 bulbs.


How many bulbs to even approach the level of incandescence required?  Eight.  Eight of the little blighters.  Okay, thinks I, that is only 200 watts…wait a minute that’s us using three times as much as the energy-saving bulbs!


Never mind, at least these will be long life bulbs.  It says so on the box.  Two thousand hours it proclaims.  A claim to which I respond – Bollocks!


Eight bulbs I told you.  I can tell you without a word of a lie that these bulbs blow and require renewal on average once every 6 weeks.  In other words, I have to replace eight blown bulbs every six weeks.*


So, in conclusion, I am giving my energy supplier three times as much money for lighting as I used to and I am spending around £6 a month on replacement bulbs.  The energy barons and lightbulb manufacturers must be rubbing their hands with glee at prize pillocks like me.


*And yes I am following instructions about not touching the buggers.


Okay, rant over.  Let’s get on wi’t grambling.

First up, a quick rundown of how The Grambler fared with his/her/its week 18 predictions.

In a word – shockingly.


Thanks to the abominable weather, this match couldn’t even take place, so bang goes the bet before we even start


vs – Prediction Away win – Naw


Another flipping draw!  I suppose I should praise Macclesfield for coming from behind and getting a draw against much stronger opposition.  But I’m not going to, because they didn’t help The Grambler.


Huzzah! The Grambler got one right.  Too late to make much money though.  Maybe the last game will go in our favour and return us a few pennies…


Bugger!  I half expected this.  have improved a lot under Tony Pulis’s leadership.  Even so…Bugger!

So, like most other weeks The Grambler has let us down.  Though, it is not all the fault of The Grambler; the rotten weather played a part.  And, because of that postponed match we did get some pennies back.  How many?  If I told you it was the answer to life, the universe and everything, I am sure you will guess.  But are we downhearted?  Who said yes?  No, of course we’re not downhearted.  One day, the big one will happen.  And then we will all be putting loads of dosh into the Bobby Moore Fund via http://www.justgiving.com/Geraldine-Smith3 .  Won’t we?  Yes we will.  Don’t shake your collective head.  We will.

Let’s move on shall we?

Do you know what?  We haven’t had a song for ages.  I think it is time to remedy that.  I could have chosen a birthday; Elvis would have been 79 this week.  Had he lived.  But he didn’t.  So he’s not.  No, instead we will mark the passing of Phil Everly, with a gramblerised version of one of his, and brother Don’s, biggest hits.

What the blibbing heck is an bird dog when it’s at home?  He’d get a bit sticky if he starts grambling honey.  I wouldn’t want to clean up that mess.  And what’s Phil Neville got to do with it?  He’s an footballer, isn’t he?  And his brother’s called Gary or Barry or something.  Who’s this Don bloke?  Isn’t it them what’s dad is called Neville?  Neville Neville.  How blibbing lazy is that?  His parents must have had very little imaginativation.  Mind you, it’s no different to that boxer bloke that sells them grill things.  Him; that George Formby bloke.  Him that went for a rumble in the jungle with that other bloke…Salvador Ali.  He’s got twelve children, this George Foreskin has – perhaps they didn’t have an telly.  Anyway, five of them are called George.  I’m susposing they’re all boys, obliviously, but you never know.  That’s just daft, if you ask me…

which nobody has, so let’s crack on with this week’s grambling.


We actually have a total of 56 games taking place this Saturday the 11th of January at 3pm.  So what has The Grambler randomly selected for us this week?


I have just had a look at the five games selected.  Look, why don’t you all just hang on to your money, eh?  Or give it to the Bobby Moore Fund via http://www.justgiving.com/Geraldine-Smith3.  Me?  Well I feel I have to place a bet, but nobody’s forcing you to.  Yes, that is how little confidence I have in this week’s selection.


For our first prediction, The Grambler takes us to , home of the Toffees who play host to the Canaries.  The Grambler predicts that Everton who have been beaten only once at home this season will be held to a draw by Norwich who have lost 7 games on the road; usually by conceding bucketloads of goals.  Grambler, I have just one word to sum up this prediction – Wrong!

Can I tell you a little story?  It concerns Stewart (founder of this marvellous blog) when he was only 6 years old.  And Everton.  A new year wasn’t complete without a visit to the funfair at the SECC in and this new year was no different.  Stewart, even then a football fan, wanted to try a lucky dip where you picked 3 sealed envelopes and had to predict which English Premiership side’s name was in the envelope.  Stewart reaches into the bucket and lifts out three envelopes which he then hands back to the stall holder. He now has to predict which team’s name is in the envelope.  Ah.  This is where Stewart (aged 6 remember) is a bit ropey.  There are 24 teams in the Premiership.  How many does 6 year old Stewart know?  One.  Everton.  So the man asks him what team he predicts is in the envelope.  Stewart proudly announces ‘Everton’.  Open envelope.  Everton it is.  Envelope two.  Which team is in the…blah blah…’Everton’.  Open envelope.  Blimey!  Everton it is.  Envelope number three…’Everton’, says Stewart.  Blow me down.  Everton again.  Three out of three.  Do you know what the odds of that happening are?  Are you ready for this?  13824 to 1!  Seriously.  Do you know what the guy gave 6 year Stewart for this amazing piece of predicting.  A f***ing teddy bear!  Not even a big one.  Just the smallest one on the stall.  B******!


For our second game we are off to the Valley where home side the Addicks are, according to The Grambler, going to beat the Tykes.  Both teams are, well, a bit crap so Charlton in 19th spot might well beat bottom placed .  Yeah.  Whatever.


Now then.  Game number 4.  We are off to the where the Robins play host to the Posh.  have only been beaten twice at home this season.  And The Grambler thinks can beat them.  Hmm.  , though higher in the league, haven’t won an away game in the league since the 12th of October.  Not looking too good, Grambler.  Granted, in their last meeting won, but that was a home game.  Can’t see them managing it away from home though.


And finally, Cyril?  And finally Esther we head to the One Call Stadium where the Stags play host to the Iron.  The Grambler, in his/her/its wisdom, reckons 16th placed Mansfield who haven’t won at home since September will beat league leaders Scunthorpe who have lost only 3 times on the road.  Jeezo!
Okay.  How much will the fund gain if this ridiculous bet pays out?  The quite frankly, crazy sum of -
£82.31

I think I will end by reiterating (that’s a good word; I must look it up) what I said earlier.  Save your money.  No.  Don’t save your money.  Just don’t give it to a bookie.  Give it to the Bobby Moore fund instead.

To finish, simply a link.  From this time last year.  Please check out - http://www.thegrambler.com/2013/01/week-22-cest-le-grambler-finalment.html