Any road up, these two well dressed ladies knocked on my door...


'I would like to give you this leaflet.' says one.


I told them that I would rather listen to Cilla Black (or anyone else who is the vocal equilalent of fingernails scratching a blackboard) singing till my ears bled than listen to someone talking about some geezer that died 2000 years ago. I also pointed out their fundamental error; Jesus didn't die, surely (Don't call me Shirley.). Well, he did... technically... but he came back to life, didn't he? Something like that. I always thought that that was the basis of Christianity. I suggested that she was not very religious if she wasn't even aware of the facts.


Actually, I didn't say that, I just said no thank you to their offer and they walked away.


Is that it? Is that this week's grumble?


No. As they walked away, I heard one say to the other, 'atheist.'


And that bothered me. I wasn't annoyed that they were calling me names; I've been called worse. No. I was bothered that, because I didn't believe that some beardy bloke up in the sky made us out of play dough, I had to be given a title.


Excuse me? So, Mrs religious woman, if I didn't believe in Santa Claus, I would have to have a name that would label me as a non-Santa-Clausy-believer-type-person? Don't think that is required. Ditto if I don't believe in the tooth fairy. Easter bunny? Same thing, as far as I am concerned.


Unlike Michael Jackson, I don't believe in zombies. Or ghosts, werewolves, mummies coming to life, witches or any other load of old warlocks.


I have a plan. Religiousy folk out there, expect me to knock on your door very soon...


'Hello, I'd like you to accept this leaflet. It's an invitation to a talk all about evolution which Charles Darwin proved back in the nineteenth century. No it isn't about a god or anyone coming back to life. It's all based on facts and facts alone.'


Actually, now I think about it, I'd probably get the same reaction as the religious nutters get.
[Well done... You've just alienated about half your readership. - Ed.]
Don't worry, things won't be too controversial next week... an old favourite is about to return.


Were any famous or notorious people born on the 28th of July? Of course, here are some I’ve even heard of. Robert Hooke 1635 (Pantomime villain.), Beatrix Potter 1866 (Creator of Peter Rabbit who is now spinning in her grave... What would she make of that one-star rated film with Peter being voiced by James Condom? ‘Unfunny bunny’ one reviewer called it.), Marcel Duchamp 1887 (Artist, it says here. How can a urinal be classed as art.), Rudy Vallee 1901 (Bandleader. Have a clip. Here is Stein Song.  You'll recognise it.), Earl Tupper 1907 (The Tough of the Track... Hang on, that was Alf Tupper. Oh, the plastics bloke.), Jacqueline Kennedy Onassis 1929 (Gold digger? Too strong?), Gary Sobers 1936 (Crickety bloke.), Rick Wright 1943 (A bit of Pink Floyd. Have another clip. Here's Breakthrough.), Jim Davis 1945 (Cartoonist.), Jonathan Edwards 1946 (Singer/songwriter. A clip. Here’s some Sunshine.), Peter Doyle 1949 (A New Seeker. Have another clip.  They've got a Never Ending Song of Love for you.), Simon Kirke 1949 (Free and Bad Company’s drummer. Here he is more recently with his own band playing Heart Break.), Steve Peregrine Took 1949 (Musician. Have a bit of Shagrat. [I beg your pardon? - Ed.]), Ray Kennedy 1951 (Footy bloke.), Hugo Chavez 1954 (The well-known president of Venezuela.), Michael Carrick 1981 (Footy bloke.) and Harry Kane 1993 (Footy bloke.). 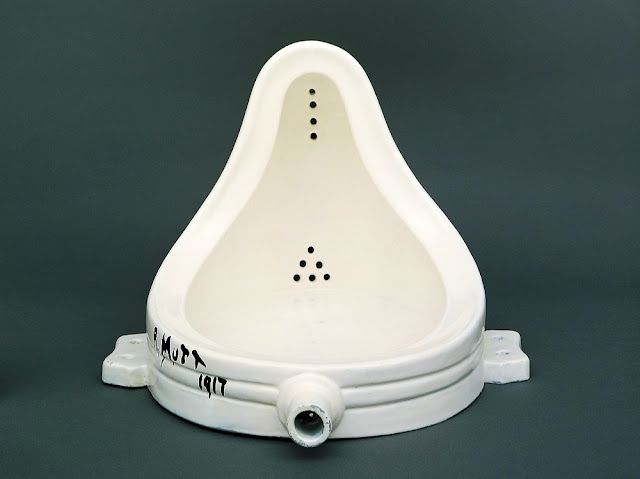 Duchamp's 'Fountain'
I'm sorry, but a gents' urinal lying
on its side does not constitute art,
in my humble opinion... Give me
a Banksy any day of the week.

Let’s move onto grambling matters. How did last week’s bet fare? It lost. Nuff said. What about a Grambler prediction for this week? Well, you may have noticed that this week’s edition of the world’s greatest ill-informed blog is, once again, a little tardy [A bit like a tard? - Ed.] so there is no prediction this week... Own up. Who shouted hooray?


Teaser time. Yay! Last week I asked you which two sets of brothers featured in the Netherlands 1994 team. The answer is Frank and Ronald de Boer and Ronald and Erwin Koeman. That was a bit too easy.


One for this week? Let’s have a Champions League question. Over the past 11 competitions, the top scorers have been Cristiano Ronaldo on six occasions and Lionel Messi also on six occasions. Hang on a mo, that doesn’t add up, I hear you say. Indeed it doesn’t; in the 2014-15 competition, the top scorer title was shared. Ronaldo and Messi both scored 10 goals through the campaign. One other player also scored 10 goals in the competition that season to make it a three-way tie. This week’s teaser? Name that party pooper.


As usual, let’s mention of the main reason for continuing to publish this blog – to raise awareness about bowel cancer. If you have any bowel problems, don’t be fobbed off with the line that you are too young for bowel cancer to be a consideration. Just point your doctor in the direction of http://www.bowelcanceruk.org.uk/campaigns-policy/latest-campaigns/never-too-young-campaign


And finally, Cyril? And finally, Esther, I am indebted to a Mr. J. Davis, one of this week’s birthday celebrants. Jim Davis is the creator of Garfield the cat, arguably the most successful cartoon in the world. In 2013 it was included in the Guinness Book of Records as the world’s most syndicated cartoon, at the time appearing in 2580 publications. There have been TV series and films made about this lazy, lasagne-loving, coffee-drinking feline, such is the character’s popularity. But where did it all start? Come with me as we travel back 40 years to enjoy the earliest Garfield comic strips.