Question: Why do weather forecasters on the TV have to be so bloody enthusiastic?  There is nothing to get so excited about.  It is windy, yes.  Do you know what?  It tends to get a bit windy at this time of year.  Anyone would think you were the first to discover it.  Watch next week as weatherman gets so excited he wets himself because there might be a bit of frost!
Any road up, it's goodbye Sober October; welcome Noelember.  Yes this month everybody is encouraged to be a bearded twat for charity.  In these days of phone hacking – I thought you might like to read the transcript of a telephone conversation of some years back….


Hello, am I speaking to Channel 4’s Commissioning Editor?


I’ve got an idea for a telly programme.


I see.  And what does this programme involve?


It’s a quiz.  There are all these people who each sit with a box in front of them…


Oh yes, and what is in these boxes?


No, when they are invited to, they open the lid and there is a number – a sum of money - printed inside the lid.  And everyone has a different number.


Right.  And do they have to answer questions to win the money?


Oh no.  There are no questions.


I thought you said it was a quiz.


Yes, but I don’t ask them any questions.


I walk about looking smug and make patronising comments.


Do you want to know something?  In all my years commissioning programmes for TV, I have yet to hear of a more ridiculous idea for a programme.  It is rubbish.  It is worse than Monkey Tennis.  Worse than Through the A***hole.  This is just crap.  In fact, it is the biggest load of…


In that case, please accept this shedload of money and an open-ended contract to make any number of shows you want.


How the blibbing hell does that work, then?  When you want sponstership for charity you’re susposed to do something a bit difficult like running marathons – Ooh, I don’t like them, them peanuts get stuck in me teeth.  Hang on they’ve changed the name now haven’t they?  Something to do with pants.  Or you raise money by making and flogging rubbish for charity.  You don’t just go about saying I can’t be bothered shaving and expect folk to give you money.  I wouldn’t expect anyone to give me money for not bothering to do something – Give me money and I won’t bother washing; or, give me money and I won’t bother combing me hair.  It beggars belief, it really does.  Knickers!  No, not knickers.  Snickers; that’s it.  Why do they have to change names?  What was wrong with Oprah Fruits?  And what’s that other one?  The stuff for cleaning.  Sounds like gonorrhoea.  Syph!  That’s it; Cif.  Used to be called Biff or something…etc. etc. ad infinitum.


What's happened to this week’s song?  Well, as I write this I have just heard of the death of Lou Reed who was famous for being a complete smackhead.  And..erm, that's it.  So let’s have a wee toon from Lou to start us off this week.


Oh it’s such a perfect day,


I’m glad I grambled with you.


Oh, such a perfect day,


You just keep me grambling on,


You just keep me grambling on.

All games take place on Saturday 2nd November at .  We have 43 games for The Grambler to choose from this week.  43?  Only 43?  Well, there is a reason for this low figure (other than the usual business of games being on at odd times).  There are another 16 games taking place in ; the 3rd round of the William Hill Scottish Cup.  For some reason I can’t find these on my Bet365 betting site.  How odd.  Can’t understand it at all.


Oh no!  Grambler what are you doing to us?  Yes, we know that Man U have not had the best of starts to the season, but come on, you surely don’t expect Fulham to beat them.  Do you know how long it is since Fulham have won a game against Manchester United?  Ten years!!  In fact some of the current Fulham squad might have played in that game.  My God, they are old.  The average age of the starting 11 that got thumped by last Saturday was over 28.  Bearing in mind that it included a 21 and a 23 year old, that is an old lineup.


Despite these facts, The Grambler predicts that the Red Devils will come to Craven (or cowardly) Cottage to be beaten by the Cottagers (That’s a rather unfortunate name. Is George Michael a fan?).  Once again I have to ask if The Grambler had a less than sober October to come up with such a crazy prediction.


Manchester United are in a bit of bother regarding a mention of the band New Order (they say) with a swastika-like logo alongside the wording. 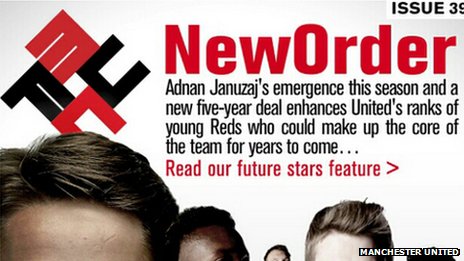 Rather unfortunate to say the least.  They claim it wasn’t meant to cause offence.  We believe you.  Honest, we do.


For the second week running The Grambler picks for a prediction.  This time they are at their home ground of Ashton Gate.  They really fu… messed it up for us last week, by beating 4-2.  Maybe, this is the start of a run.  The Grambler could be right, because, while they have won more games than the Robins, the Latics only seem to win in home encounters.  Is The Grambler on to something?  Or just on something.  We can’t even check on previous games between these two as they haven’t met in seven seasons, City having been relegated from the Championship (or Division 2 in old money) at the end of last season.  What do you reckon?  Do you think The Grambler is right to predict a home win?
Motherwell link:  Bristol City Midfielder Stephen Pearson began his career at the Mighty 'Well.


For our third prediction The Grambler takes us to Sixfields Stadium where the Light Blues play host to the Magpies.  Now, given that Coventry are sitting at number 13 pop pickers and County are down in bottom place and without a manager, you would have to agree that The Grambler has called this one right.  But hold on there, last season’s encounters between these two ended as a draw and a win to .  Does that alter things in any way?  No.


Did you know that Coventry City FC was originally known as Singer FC because it was formed by employees of that bicycle, and later car, manufacturer?  Isn’t that interesting? [No – Ed]


For the fourth of our predictions, The Grambler takes us to Gigg Lane Stadium where the Shakers play host to the Seagulls.  Only two points currently separate these two teams; Torquay are in 22nd place on 11 points while Bury are in 19th spot on 13.  Neither team is doing particularly well.  Bury finally won last Saturday after two months without a win and Torquay haven’t won since mid-September.  Maybe, just maybe, Bury will still have the winning feeling and do it again this week.  What do you think?  Does anyone know? [Does anyone care? – Ed]
Right.  It's time for cracking name of the week.  This week it is Bury forward Temitope Ayoluwa 'Tope' Obadeyi.  Not a regular first team player sadly so we probably won't hear the commentators struggling with the pronunciation.  Brilliant name, though.


And finally, Cyril?  And finally Esther we are off to one of the northernmost senior football stadia (I did Latin, you know) where Caley take on Killie (I still haven’t received a consignment of those mouth-wateringly delicious Killie pies.  Mmm…they are so tasty).  After a cracking start to the season Caley seem to have lost their way a bit and, after remaining unbeaten until mid-September, have lost three of their last four games.  Killie, on the other hand, had a terrible start to the season, not winning a game until the 19th of October.  However, they followed that with another so maybe they are back on track.  Caley and have met 4 times in the past year (that’s how daft it is up here with leagues of 10 and 12 teams) and Caley are just ahead with two wins to Killie’s one and one game drawn.  The Grambler reckons it’ll be a draw;  Hmm, could be right.


Motherwell links: Caley management team Butcher/Malpas.  Forward Richie Foran.  Blah blah blah.  I told you last time The Grambler picked Caley.  What?  You didn’t read that one?  Well, you should have done.  I don’t just do this for the good of my health you know.  No.  I do it for the good of other people’s health; specifically those with bowel cancer.  Which brings me neatly [you call that neat? – Ed] to a link.  Please visit http://www.nhslanarkshire.org.uk/news/news/Pages/HairmyresITU.aspx to read a little more about the founder of The Grambler.
Happy grambling.